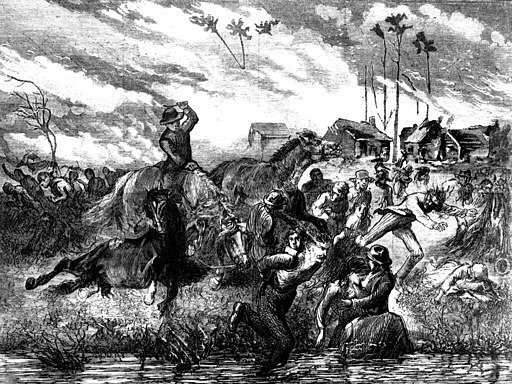 Fire Prevention Week was chosen decades ago to commemorate the anniversary of the Great Chicago Fire of 1871.

On the same date as the Great Chicago Fire, October 8, the largest forest fire in the recorded history of North America swept through northeastern Wisconsin and Upper Michigan, destroyed an area of 2,400 square miles or 1.5 million acres, took between 1,200 and 2,400 lives, and left more than 1,500 homeless. The exact number of fatalities is unknown because large numbers of lumberjacks and railroad and factory workers lived in camps and boarding houses in the area. The fire was so intense that all traces of some houses, churches, and other buildings in Peshtigo were destroyed except for chimney bricks, foundation stones, and bits of melted metal. In places, the fire was so hot that it turned the sand in the streets into glass. Many of the fatalities were recognizable only as charred bones, with no trace of clothing or identification.

From Our December 1877 Issue: Chicago and Peshtigo

From 1964: Roi B. Woolley on the Peshtigo Disaster

The summer of 1871 had been extremely hot and dry in northeastern Wisconsin and Upper Michigan, and throughout the upper Midwest. Farming and logging had cleared the hardwood and white pine forests. The branches and other brush were burned or left in piles on the cleared land. Railroads had cleared their rights-of-way and left the brush and branches in piles, where they were sometimes ignited by sparks from steam locomotives. Industry in the area was based on wood products (lumber, shingles, and baskets), which created huge piles of bark and sawdust. Most of the houses and other buildings were wood frame with wood siding and wood shingle roofs. In Peshtigo, the few sidewalks were made of boards. Sawdust and bark chips were used to control dust and mud in the unpaved streets.

On Sunday, October 8, the winds blew strong and hot from the south, as they had for days. Weather over the Midwest was controlled by a stationary low pressure system centered over Colorado, Nebraska, and South Dakota, which probably affected fire behavior in both the Peshtigo and Chicago fires. This weather system was also responsible for the rains that eventually extinguished the Peshtigo fire.

Several small fires had been burning in the area earlier in the day. In the evening, the fires merged as winds shifted, and a wall of fire bore down on Peshtigo. The winds rapidly changed direction, creating a “tornado of fire” that destroyed the village in little more than an hour. Hundreds died from the fire and smoke or drowned in the river while trying to escape. The strong winds shifted to blow from the west, and carried embers across Green Bay to ignite fires in Door County.

The fire spread north along Green Bay to the Menominee River, burning several villages and part of the city of Marinette; north past Marinette up the shore of Green Bay more than halfway to Escanaba, Michigan; south along Green Bay past Little Suamico nearly to the Village of Howard; and east across Door County to Lake Michigan. The spread of the fire slowed as it reached Green Bay and Lake Michigan, and as the rains began several days later.

It is called the Peshtigo Fire because about 800 of those who died were in Peshtigo–about half the population in the 1870 census.

The Great Conflagration That Swept Through Chicago

It received less attention than the Chicago fire with its 250 fatalities because Peshtigo was an isolated frontier town with no communication except for the U. S. Mail and a single telegraph line, which was destroyed in the fire with its telegraph office. News of the burning of Peshtigo did not reach Green Bay or Madison, Wisconsin’s capital, until October 10, although Green Bay knew of the fire the following morning because it had spread so far south. By October 10, the fire in Chicago was out, and the national news was filled with stories about it. The Peshtigo Fire was news in Wisconsin and Michigan, but was not considered newsworthy by many national papers.

This map (CLICK HERE) is adapted from a 2006 Wisconsin Department of Tourism map at www.travelwisconsin.com, and from http://www.peshtigofire.info/gallery/burntmap.htm, a map in the archives of the Wisconsin Historical Society. The dashed lines indicate the approximate area burned.

The Peshtigo Fire Company had a single horse-drawn steam pumper to protect houses and the small factories near the river, but it was ineffective in this forest fire and the fire storm that wiped out the village. There was no other organized fire protection between the City of Green Bay and Marinette.

For additional information on the Great Peshtigo Fire, visit www.peshtigofire.info, or search the Internet for “Peshtigo Fire 1871”.

Although Peshtigo burned 136 years ago, the tragedy can teach us valuable lessons. Today, it is fashionable in many parts of the country to build homes in the wildland-urban interface, away from city living with its noise, traffic, crime, water mains, and fire stations near each neighborhood. It is also fashionable to use all-natural materials in these homes, resulting in lightweight wood-frame (truss) construction with large windows, combustible wood exteriors, and often wood shingles. Although the siding, shingles, and deck lumber may be treated with a fire retardant, these components will burn if the forest fire or brush fire is hot enough, if they are weathered, or if they have been painted or stained. Often, these homes are built under overhanging trees, and the undergrowth is allowed to grow close to the houses. It is also common for the ground around the houses to be covered with wood chips or bark mulch. Although these materials require little maintenance, hold moisture in the soil, and can reduce erosion, they are combustible tinder in dry weather. Log sections or wood blocks are often used in place of sidewalks or steppingstones.

The United States Fire Administration has a Web site with links to other resources, that are dedicated to reducing the impact of fires in the wildland environment on our lives and on our homes. Visit it at http://www.usfa.dhs.gov/citizens/all_citizens/home_fire_prev/wildfire. Download the free booklet from http://www.usfa.dhs.gov/downloads/pdf/publications/fa-287-508.pdf
Additional information and resources are available at www.firewise.org.

Any Web sites noted above are used only as sources of additional information. Reference to them is not an endorsement of Web sites, products, or manufacturers.

We value your privacy. When you visit Clarion Events (and our family of websites), we use cookies to process your personal data in order to customize content and improve your site experience, provide social media features, analyze our traffic, and personalize advertising. By choosing “I Agree”, you understand and agree to Clarion’s Privacy Policy.