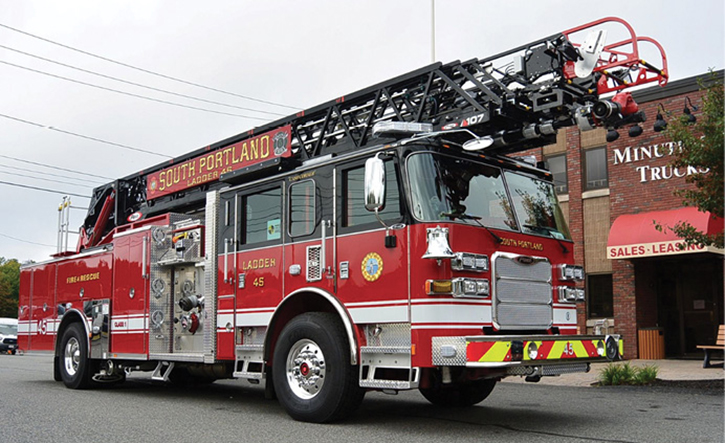 Like many firefighters, I have a limited knowledge of electricity, but I do know that coming into contact with energized power lines is never a good experience. I know that higher voltage lines are more dangerous than lower voltage lines, but even low-voltage lines can deliver a fatal shock. I was taught to stay far away from anything long, black, and slinky attached to a pole.

Every firefighter should develop a basic understanding of electricity and power lines and the types of overhead wiring that they are likely to encounter in their communities. There are many suppliers of electricity and many arrangements of distribution lines, so it is important to become familiar with the specific configurations common in your area. Most power companies are more than willing to provide that type of training for fire departments in their service areas.

In most areas, the lower wires attached to poles are for communications: telephone, cable TV, and data. These lines are generally not dangerous unless an electrical line is in contact with them. On the next level above them are usually the power lines that distribute electricity to buildings in the immediate area. Higher on the same poles are often higher voltage lines that deliver the electricity from the substations that serve larger areas. Some poles may support three or more sets of electrical wires; as a rule of thumb, the higher they are mounted, the higher the voltage. These high-voltage lines are not insulated like the power cords we have around our homes. 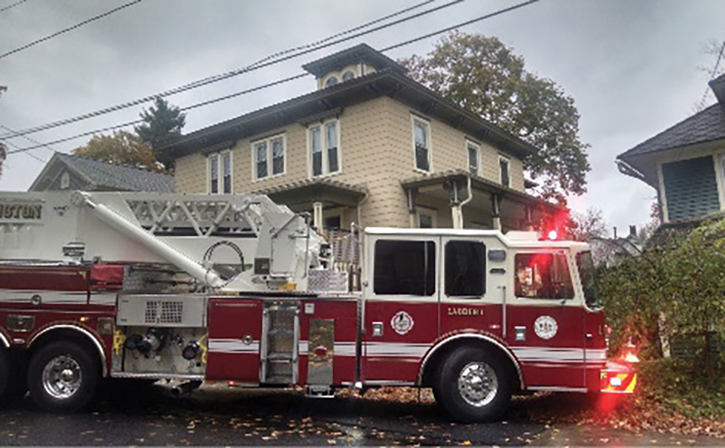 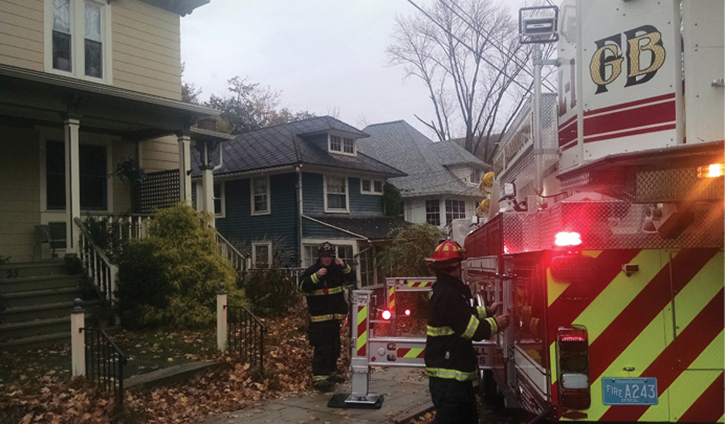 (1,2) Firefighters in the Great Barrington (MA) Fire Department position their aerial tower under power lines to operate safely during this training exercise. (Photos courtesy of author.)

In some European countries, the power companies use a color-coding system on their utility poles. A reflective colored strip on the pole identifies the pole as carrying a specific level of power. An aerial apparatus operator or officer can check the color code against a chart onboard the apparatus. The chart specifies the minimum distance from the power lines at which it would be safe to operate an aerial device.

Table 1 lists the minimum safe distances, based on voltage, that the Occupational Safety and Health Administration (OSHA) has identified for power company employees working around energized lines, whether they are using bucket trucks or portable ladders. Some power companies have developed training programs for firefighters based on the same guidelines. The safe distance increases with the voltage because of the induction currents that allow electricity to jump across an open gap to reach a path to the ground, such as a steel or an aluminum ladder. 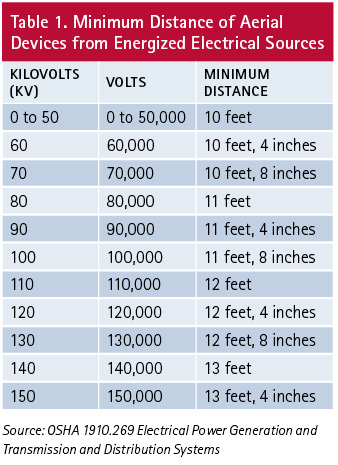 Most of the power lines we are likely to encounter in neighborhoods and on city streets are less than 50,000 volts, so the guideline of maintaining a minimum distance of 10 feet would apply.

Is this a big problem? The answer is shocking! On average, once a month we hear about a fire department aerial device coming in contact with power lines. What is even more shocking is the number of times this occurs on the apparatus apron during the morning apparatus check. Unfortunately, it seems that every year we hear about one or more fatalities that result from unanticipated contact between aerial apparatus and power lines. 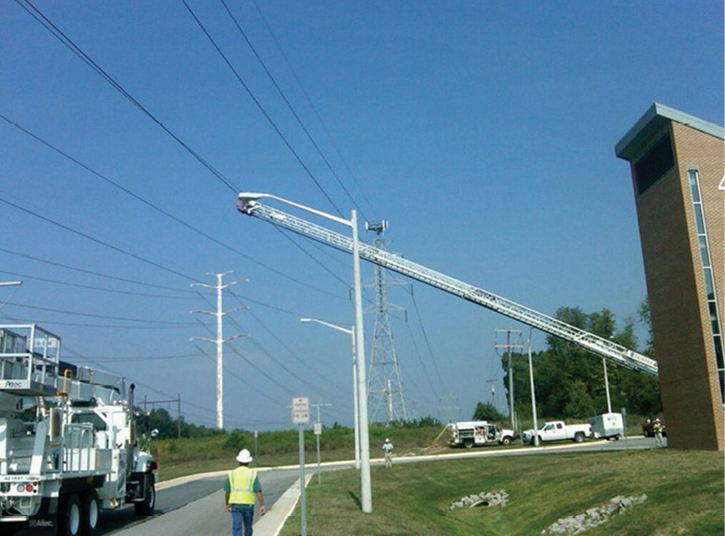 Apparatus operators conducting apparatus checks or training in California, South Carolina, Missouri, Pennsylvania, Virginia, and Georgia all have shared this undesirable experience recently. Luckily, no firefighters were killed in any of these recent apparatus check incidents; however, complacency kills. It would be easier to understand if these incidents had occurred at working fires with smoke, heat, excitement, and the adrenalin rush. However, it is evident that complacency too often allows us to pull the apparatus out onto the apron, as we have done a hundred times before, and then run the aerial device into the same power lines that were there every day in the past when we conducted the aerial apparatus check. Unfortunately, there is no good explanation for that behavior. 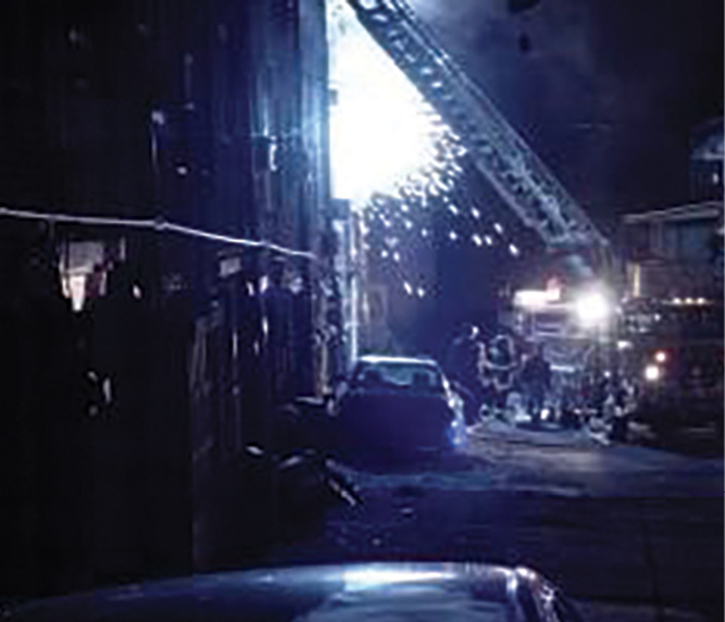 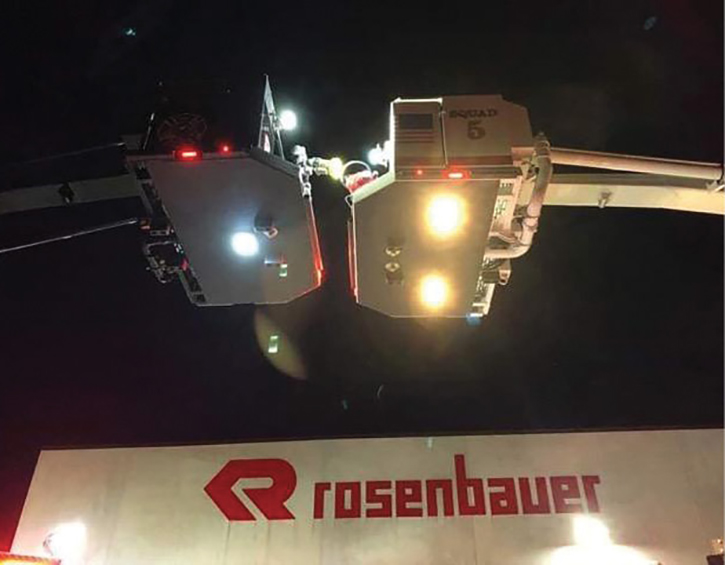 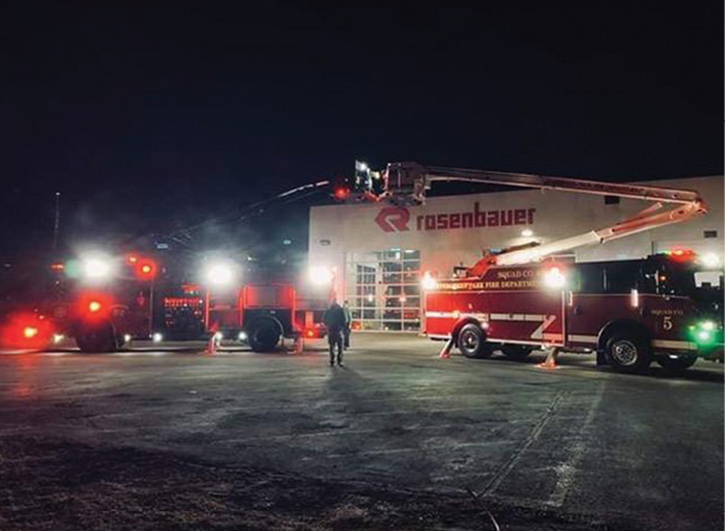 (5, 6) Even when equipped with lights, a black or dark colored aerial device has no contrast against the night sky. [Photos courtesy of the Wyndmoor (PA) Hose Company.]

How can we fix the problem? Proximity sensors are certainly one idea that comes to mind. They would warn aerial operators as they approach the electric field surrounding power lines. The idea sounds simple, but nothing in the fire service is ever that simple. It’s true that this technology already exists and that it works. However, the sensors are very sensitive, so we would have to calibrate them often; in their present form, they probably could not survive the rigors of fire service use. The reality is that the proximity sensors would have to work in smoke, heat, and water. They would have to work in Tucson, Arizona, in August and in Anchorage, Alaska, in January. That technology does not exist yet. Several companies are working on it, but they will not be ready to bring the sensors to the fire service market anytime soon.

(7) This new aerial ladder equipped with electronics was run into power lines during apparatus training before it was ever put into service. (Photo courtesy of Minuteman Fire Apparatus.)

Working with your local power company is an option and a good first step. In my area, power companies bring training programs to local fire departments at no cost. This initial training could lead to a dialogue with the power company officials in which the different distribution systems within the fire department’s area and safety guidelines for using aerial equipment around these systems are discussed and identified.

When specifying new aerial apparatus, painting the aerial device black has become all the rage. Unfortunately, the black paint makes the device much more difficult to see when it is in motion. As shown in photos 5 and 6, it makes little difference whether the aerial device has lights on it. There is no contrast between the night sky and the aerial device. The dark color literally blends into the darkness, making it very difficult to see and operate the aerial device safely, even without the smoke, fire, trees, power lines, and all the confusion that the fireground can bring. Operating an aerial device painted black or any other dark color at night is equivalent to asking someone to drive a vehicle while blindfolded. It is imperative that the National Fire Protection Association technical committee of NFPA 1901, Standard for Automotive Fire Apparatus, address the issue of black (or any other dark color) aerial ladders that disappear into the night sky.

In photo 7, the new, never-put-into-service aerial ladder was run into power lines during apparatus training. When a modern aerial device laden with electronics and a computer-controlled system becomes electrified, it becomes a total loss. It was in this case a total loss to the city’s insurance carrier; the cost was more than a million dollars. It is unclear if the black aerial was a contributing factor, but it could have been.

MICHAEL WILBUR has been a volunteer firefighter for more than 40 years and is a 32-year veteran of the Fire Department of New York, from which he retired as a lieutenant from Ladder Company 27 in the Bronx. He is nationally recognized in the areas of emergency vehicle operations, apparatus placement, and apparatus purchasing.

Darley Announced As an EY Midwest Entrepreneur of the Year® 2021