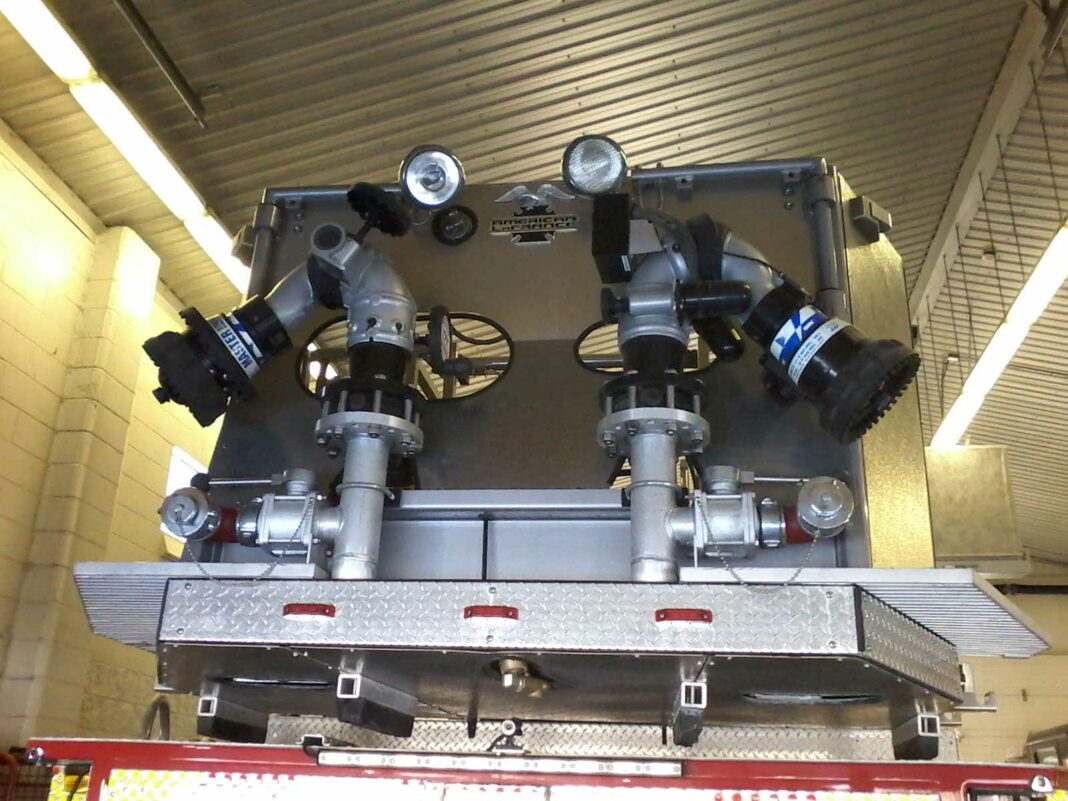 One of the functions of a truck company is to supply elevated master streams. An aerial apparatus or ladder truck will have an aerial device of some sort with either a single nozzle or multiple nozzles attached to the tip of it for water delivery. There are times when deploying large volumes of water is needed at a higher elevation so that fire can be suppressed and extinguished. This may be a defensive tactic being employed or for exposure protection. Regardless of the tactic, elevated master streams are an asset of the truck company.

Most aerial apparatus have preplumbed waterways running underneath the length of the aerial ladder. This is a change in the fire service from when there was only a nozzle mounted at the tip and a supply hose had to be stretched up the ladder to connect to it the nozzle. Having a preplumbed waterway saves time on setup and allows for quicker water delivery.

Even though most aerial apparatus have preplumbed waterways, not all have on-board water pumps. An engine or pumper is still required to supply the aerial apparatus with the needed water pressure so that the nozzle(s) will flow adequately. If this is the case, make sure the supply hose is connected to the right intake. Usually the intake for the aerial master stream will be located on the rear of the truck if it is a rear-mount ladder or on the side if it is a mid-mount ladder. It will also be labeled accordingly.

Some aerial apparatus will have only a single nozzle and others will have double nozzles. The choice to have either a smooth bore nozzle or a combination nozzle is up to the fire department operations and how they perceive the best way to deliver water. As you can see in photo 1, a single smooth bore nozzle is located right in the middle of the platform as opposed to photo 2, where we have two combination nozzles located on two even sides of the platform. If the aerial device is a straight ladder, then there will only be a single nozzle located right in the middle of the ladder, as shown in photo 3.

Some of the nozzles are manual operation while others are will be automatic operation. In photo 2, there is an example of each type. If the nozzle is a manual type, it requires a firefighter to operate it at the location in the platform. If it is an automatic nozzle, then it can be operated remotely either at the pump panel or at the turntable base. An automatic nozzle alleviates the need for a firefighter to be on the aerial tip while there is water flowing. There is great debate about this subject: should there be a firefighter on an aerial ladder while there is water flowing? Depending on who you ask, you will get different answers and different reasons why or why not.

On a straight aerial ladder, there is the option to have a pinnable waterway. The thought behind this design is to give the firefighter or incident commander the option to have the ladder in either a “rescue” mode or a “water flowing” mode. There is a pin that can be removed and inserted into one of two holes marked “rescue” or “water flowing,” or it can be a latch that is rotated into either position. There will be labels on the top part of the ladder as well as on the bottom part of the ladder so that any one person can see which mode the aerial ladder is set in. See photo 4.

So why have this option? It allows a ladder tip to be located closer and easier to a window or rooftop for rescue purposes. Seeing as we have preplumbed waterways below the aerial ladder, there are more obstructions below to play with preventing us from gaining closer access. By removing the nozzle and the waterway, firefighters can remove the obstructions and obtain a slenderer profile for rescue operations. This was accomplished by developing a pinnable waterway.

Although the idea and practical approach is a good one, there are many dangers associated with a pinnable waterway. On April 8, 2008, a deputy fire chief was killed in the line of duty in Erie, Pennsylvania, while fighting an industrial fire. The cause of this line-of-duty death (LODD) was the deputy chief being struck by the aerial ladder water monitor and 30 feet of aluminum pipe attached to it. The water monitor was launched from the elevated aerial ladder that was being used for master stream operations when it was charged with water. This ladder truck had a pinnable waterway. During the NIOSH investigation, it was discovered that the pin did not always fit properly into the holes and was subsequently found on the ground in front of the ladder truck that fatal day. During the LODD investigation, it was learned that there were 10 other similar incidents involving waterways being launched of off the aerial device. There were no fatal injuries associated with the 10 incidents except for an injured hand. If you have a pinnable waterway on your aerial device, it is vitally important that is checked every time before water is flowed that the pin or latch is in the right position and that it is completely in all the way. This can be done during the truck check in time but also needs to be done on scene when using it for master stream or rescue operations.