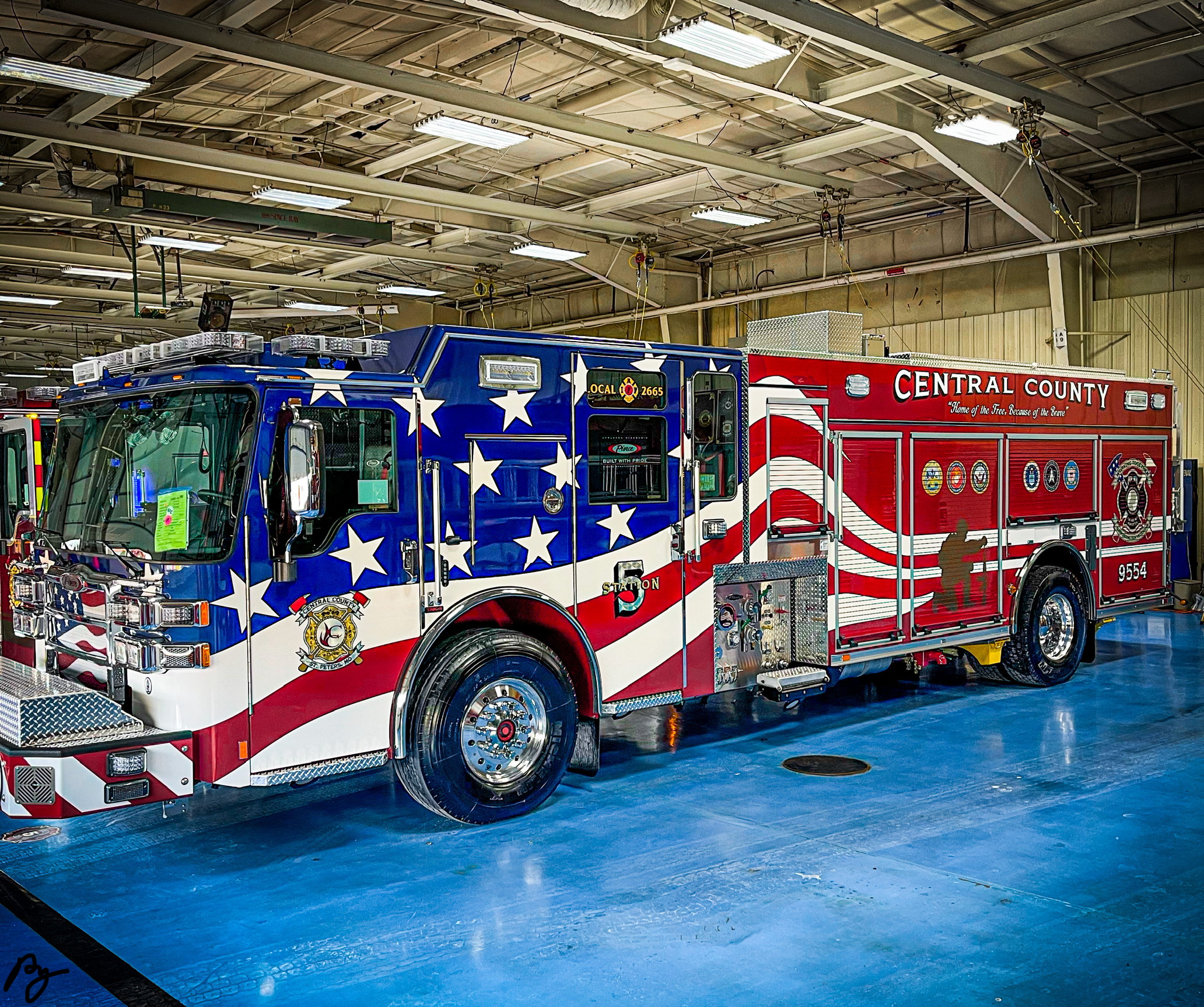 An impromptu ceremony on the manufacturing floor was held on Tuesday, the 80th anniversary of the 1941 Pearl Harbor attacks.

Saint Peters, MO. Dec 7, 2021 — With construction underway for three new fire trucks purchased over a year ago, a last minute idea to paint one of the fire trucks with an American flag design resulted in a unique fire truck that is something never before created. The “American Veteran Fire Truck” by Pierce was rolled onto the “blue floor” floor at Pierce Manufacturing this week for final inspection by the professional firefighters of Central County Fire & Rescue (CCFR).

Located in the St. Louis metro region, CCFR provides fire protection services in Saint Peters, Missouri. Saint Peters is also the former home of Marine Lance Corporal Jared Schmitz, who was killed in action on August 26, 2021 as the result of an enemy attack while supporting non-combatant evacuation operations in Kabul, Afghanistan during Operation Freedom’s Sentinel. It was during the services to honor Lance Corporal Schmitz’ life and his ultimate sacrifice that the idea to dedicate a truck in his honor was first born.

“Our entire community was in shock and mourning the death of a local hero, and we knew we wanted to do something to honor him,” says Jason Meinershagen, CCFR Deputy Chief and Public Information Officer. “Our fire district is very supportive of our veterans, so we quickly knew it was not enough to dedicate a fire truck to just one man. We wanted to do something that touched the heart of every patriot in our community,” says Meinershagen.

Initially referred to as “the flag truck,” the original idea of painting the truck with an American flag theme grew to incorporate multiple elements of military service and sacrifice, including the MIA/POW theme and the emblems for every military branch. In the saddest of ways, the timing was ironic. When CCFR representatives first pitched the idea to Pierce, they discovered that two of the three trucks they purchased were already in the process of being painted, and the third truck was scheduled to move into the paint room the next day. A decision had to be made right then. To move forward with the idea would mean pulling the truck off the production line and risking delays while a new paint design was approved.

As news of the decision to pull the truck off the line to design a new paint scheme made the rounds amongst Pierce employees, it caught the attention of Jim Johnson, President of Pierce Manufacturing.

“This CCFR pumper tells a story, and a photo of this type of vehicle that will be hung on my wall at home when I retire. It’s so humbling to be a part of dedicating this truck to the American veteran,” says Johnson.

Firefighters from CCFR traveled to Appleton, Wisconsin this week to perform the final inspection of the fire truck at Pierce Manufacturing. Again, the timing proved to be ironic, if not historic. While at the plant on Tuesday, also the 80th anniversary of the attacks on Pearl Harbor in 1941, an impromptu ceremony was held to remember Pearl Harbor Day. CCFR firefighters also personally thanked every employee who played a role in the design, construction, and painting of the American Veteran Firetruck and presented a unique challenge coin commemorating the fire truck along with a personalized letter of appreciation to nearly 280 Pierce employees.

In part, the letter read, “Our mission here at CCFR is ‘Working Together, Supporting Our Community,’ and we know of no greater or more honorable way to support our community than to support the veterans who live among us. Whether they served in wartime or in peacetime, on American soil or in distant lands, every American veteran deserves the respect and appreciation of a grateful nation, regardless of political or religious affiliation. The American Veteran Fire Truck you have designed and built is a testament to the pride we have in our nation and the love we share for the veterans who have given so much.”

The residents and taxpayers of CCFR’s fire district did not incur any additional cost for the painting of this truck. The difference in cost for this paint scheme over the current paint scheme was donated by an anonymous donor.

“Every truck tells a story, and this one certainly stands out,” says Meinershagen. “This truck is a rolling tribute to every American who has the distinguished honor of calling themselves an American veteran, and we are proud to work with Pierce Manufacturing in presenting this fire truck to our community in the coming months, where it will continue to live out its story.”