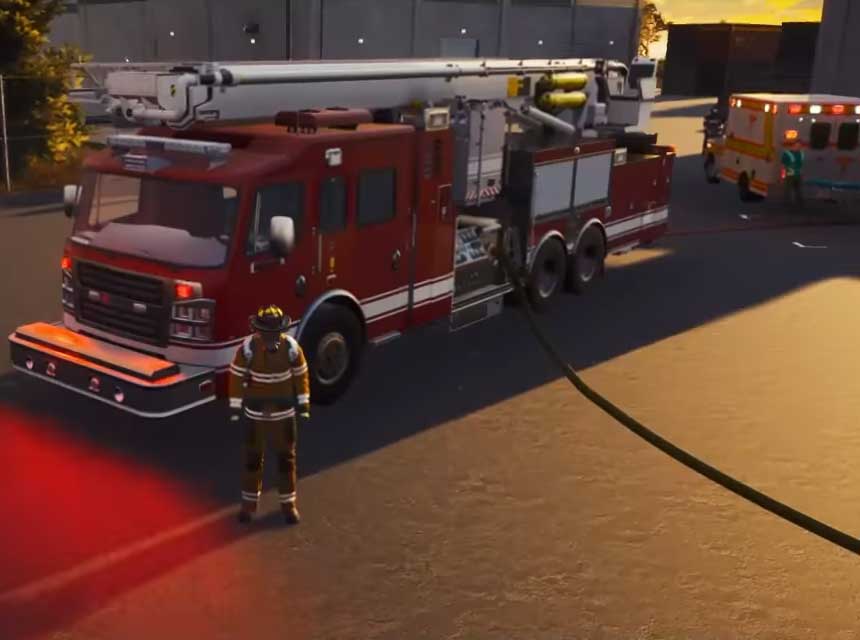 Under the motto “UNITED AGAINST FIRE,” German publisher astragon Entertainment and the developer team of Chronos Unterhaltungssoftware were very happy to celebrate the  release of their exciting new simulation game Firefighting Simulator – The Squad on PC last week. The game, which has been eagerly awaited by firefighting enthusiasts all around the world, comes with five officially licensed firefighting trucks by Rosenbauer America. Firefighting Simulator – The Squad had a great start right away on Steam™, where it burned its way to the top of the charts within a few days after the initial launch!

In Firefighting Simulator – The Squad playersslip into the role of an US firefighter and experience first-hand what it means to battle blazes as a team of firefighters in a large US city with more than 30 varied operation sites.

In exciting missions, the team members will go out with a selection of 5 officially licensed firefighting vehicles by Rosenbauer America – such as the TP3 Pumper®, the T-Rex® Articulating Platform, the Viper® Aerial, as well as a Rosenbauer Rescue and a Command Walk-in Rescue – to extinguish fires and save people from the flames. While single players take control of their AI-controlled colleagues with the help of an intuitive command interface and instruct them on how to proceed, up to four players can work together as a team in the game’s cooperative multiplayer mode and prove their skills in the field of firefighting.

Thanks to an advanced fire simulation – including water, smoke, heat, backdrafts, flashovers, grease fires as well as a number of other causes of fire such as electronics, chemicals and explosions. The firefighter team will always be called to carefully assess fire situations and anticipate dangers – no operation will be like the one before! Next to this, players can look forward to a complex physics system, which recreates the destruction occurring within dynamically spreading fire situations. For those who are looking for even more realism: The game also includes authentic firefighter equipment, such as helmets, boots, breathing apparatuses and a number of tools made by well-known manufacturers of the North American firefighting industry – e.g. Cairns®, MSA G1® SCBA, Leatherhead Tools® and HAIX®.

Before prospecting firefighters dive into the flames, a comprehensive training tutorial ensures that players are introduced to the basics of firefighting and how to deal with different tools and types of fire, and how to use this knowledge to master the upcoming dangers effectively. Regardless if the firefighting team is called to attend minor fire situations or large-scale operations such as a burning factory, in Firefighting Simulator – The Squad utmost caution is always required and the team must be coordinated as efficiently as possible to get the blaze under control and rescue any people that may still be trapped in its way.

Firefighting Simulator – The Squad on Steam™:

Firefighting Simulator – The Squad on firefighting-simulator.com:

Firefighting Simulator – The Squad on astragon.de:

HFSC Will Award $300 Stipends To 30 U.S. Fire Departments For Local