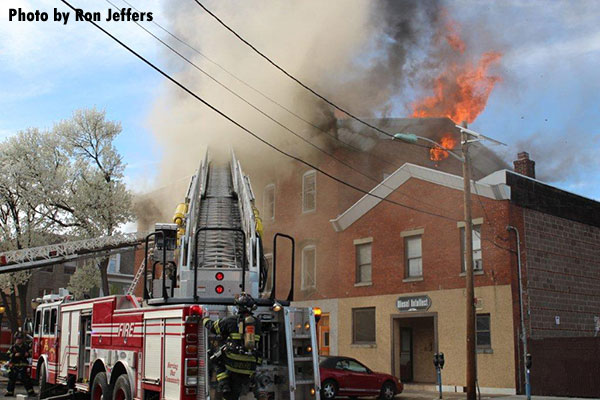 Shortly before 4 p.m., a police officer radioed in a smoke condition in the area, followed by the Main Street address when he found the source and reported a working fire. A full assignment was dispatched to 76 Main Street. Deputy Chief Charles Grieco reported smoke showing from a distance. When he arrived at the scene, he couldn’t provide an accurate size-up due to the thick smoke in the street obstructing his view. The fire began on the first floor in the kitchen of Choripan Rodizio Restaurant at the duct work area, above the Ansul System, according to a firefighter. Flames quick rose up the walls, affecting 10 apartments above.

A second alarm was struck and a recall of off-duty members was ordered. Mutual aid units were dispatched to the scene, as well as to cover the city.

All occupants of the building were safely evacuated, including two pet dogs, however one dog died on the third floor. One of the surviving dogs was rescued by an Englewood firefighter.

As conditions began to deteriorate, the evacuation of the fire building was ordered. A third alarm was transmitted, and master streams set up. This included Ladder 1 and 2’s ladder pipes and Englewood’s tower ladder. There were special calls for addition apparatus that followed.

Flames shot above the structure along with flying embers, as the Englewood tower was repositioned to a lot at the rear of the building and re-established their tower ladder operation.

The fire was under control in under three hours, according to Lt. Justin Derevyank. Besides Englewood, mutual aid fire companies that operated at the scene came from Teaneck, Bogota, Ridgefield Park, and Maywood. EMS personnel set up a triage area opposite the fire building and examined numerous firefighters. Two members were transported to Hackensack University Medical Center and treated for non-life threatening injuries.

Local officials examined the stability of the structure and it was later demolished.

Physio-Control Partners with SonoSite to Develop Ultrasound for EMS Market