Companies respond to a report of black smoke on the upper floors of a newly constructed high-rise. As Ladder 1 arrives on scene, the officer sizes up the incident, establishes command, and gives a radio report to dispatch. Building security guards confirm the presence of smoke on the upper floors. Ladder 1 enters the building and does not transmit another message. The second-arriving officer announces that Engine 1 has established a water supply and personnel are carrying high-rise hose and equipment to the upper floors for a coordinated attack. Engine 1 does not transmit another message. The battalion chief arrives on scene and requests progress reports. There is no response, only intermittent static on the radio.

As additional companies arrive on scene, the battalion chief begins to fear that he will be unable to command the incident. At the same moment, another building security guard arrives in the lobby; the chief can overhear the firefighting operations through the security guard’s portable radio. “I need that!” the chief states. The guard hands over his portable radio, and the chief is now able to communicate with personnel on the upper floors. The chief then asks security for all remaining handsets and effectively begins to control the fire. Companies report that an electrical appliance had ignited; the building’s sprinklers have fully extinguished the fire. The chief declares the incident under control. 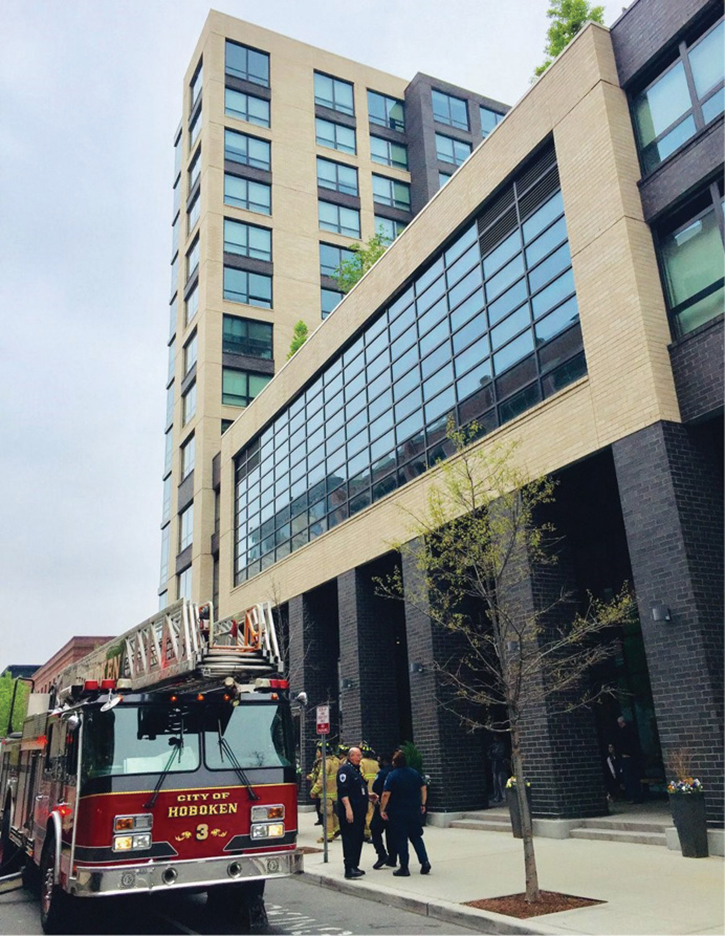 Learning from a Near-Disaster

The recent fire in Hoboken, New Jersey, described above highlighted a need for a change in fireground communications. Fire officers had long known about the limitations of the department’s UHF radio frequency but had never experienced such a complete communications breakdown during a fire. Before terminating command at this incident, the battalion chief performed various radio tests throughout the high-rise building (photo 1). They revealed that this newly constructed building’s steel and concrete walls are so thick that they block the radio waves of the department’s UHF repeater frequency. Communication on the UHF repeater channel is possible only when a portable radio is positioned near a window. Alternately, personnel can communicate through the department’s simplex (nonrepeater) channel, just like the security guard’s portable radio. Even the building’s command room (built to the strictest code requirements) is too distant from a window to allow for effective communication.

During the postincident analysis, fire officers discussed the newfound dilemma. Effective communications are critical to firefighting operations. But, communications are impossible within the new building. The battalion chief enlisted help from the chief, fire marshal, and building official. Companies began to survey their communications potential in various locations throughout the community. The city had expanded rapidly, now incorporating more than 70 high-rise buildings and approximately 55,000 residents in 1.2 square miles. The newest buildings were noticeably changing the department’s ability to communicate on its traditional frequency.

Fire officers researched the topic and found a great resource in the U.S. Fire Administration’s Voice Radio Communications Guide for the Fire Service, published in June 2016.1 This resource describes the spectrum of radio frequencies, types of communication systems, and federal regulations regarding same. The document summarizes the problem at hand, “Radio waves can travel through some materials, such as glass or thin wood, but the strength is reduced due to absorption as they travel through. Materials such as metal and earth completely block the waves due to their composition and density. In addition, some materials will reflect radio waves, effectively blocking the signal to the other side.” Blocked transmissions are common in urban environments. In Hoboken, complete failure of the UHF frequency became a new concern.

A thorough analysis of the problem highlighted several areas of concern across the city:

The Hoboken (NJ) Fire Department (HFD) fire marshal researched construction and fire code requirements under New Jersey’s codes. At the time, builders were not required to account for blocked radio waves (recently, New Jersey adopted a new building code that requires such an analysis for new buildings). Instead, the code required high-rise buildings to have an independent communications system (unrelated to the department’s UHF frequency) for firefighters to use telephone handsets to communicate directly with the command post (photo 2). As it turns out, the handsets were frustrating to use, staff intensive, and limited mostly to one-on-one dialogue. Simply stated, construction companies were meeting code requirements, but firefighters did not like or use the communications system that was required. 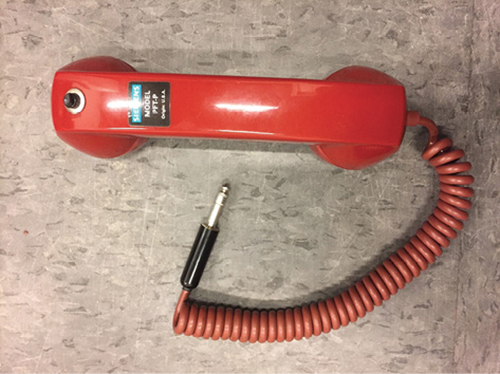 The HFD clearly needed to adapt to changes in the community to avert a communications disaster. It wanted construction companies to improve their ability to use the existing UHF frequency rather than install a frustrating system of telephone handsets. Although the existing codes did not require this type of change, the department could petition the city council to pass an ordinance that would mandate the change. The HFD could borrow existing language from the International Fire Code’s (IFC’s) “Emergency Responder Radio Coverage.” As we soon learned, other densely populated cities in the region were facing the same communications barriers and were arriving at the same solution—mandating better code requirements by ordinance. 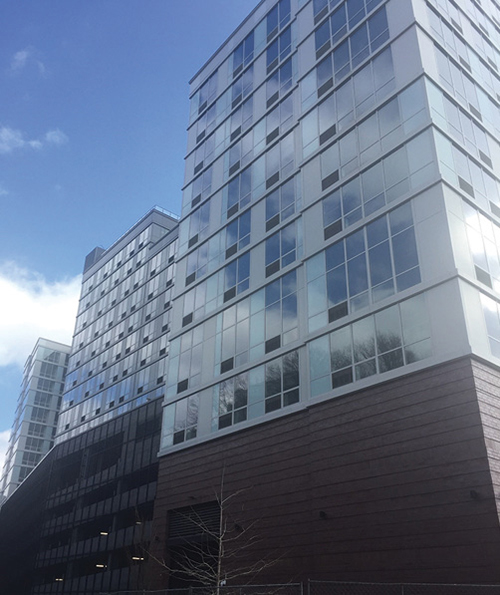 Hoboken realized success in the spring of 2018. The city’s construction code official and fire marshal proposed adopting the IFC Emergency Responder Radio Coverage language into a municipal ordinance. The language was well-written and based on nationally developed consensus standards. It required the installation of a radio coverage system inside a building that is equivalent to the radio coverage outside a building. The requirement applied to all newly constructed Type 1 and Type 2 buildings. Specific design elements included the following:

Certain exceptions apply, as per the International Building Code and the IFC.

Owners must maintain and recalibrate the systems periodically.

Code officials may not issue a Certificate of Occupancy unless this requirement is met.

The fire code official and subcode official are responsible for enforcing compliance and may revoke a building’s Certificate of Occupancy for noncompliance.2

After the new ordinance passed in the City Council, it went into effect in a 450-unit building on the west side of Hoboken (photo 3). This monolithic concrete high-rise met the code by installing bidirectional antennas (BDAs) in common areas (photo 4). All equipment is calibrated to Hoboken’s specific frequencies. These antennas capture radio transmissions within the building, deliver them to the roof, and send them out to the HFD repeater on the other side of the city, with return transmissions coming in reverse. As required under the new code, transmissions inside the building are as clear as transmissions outside the building. In fact, transmissions adjacent to the building have improved; the BDAs inside may capture signals outside. 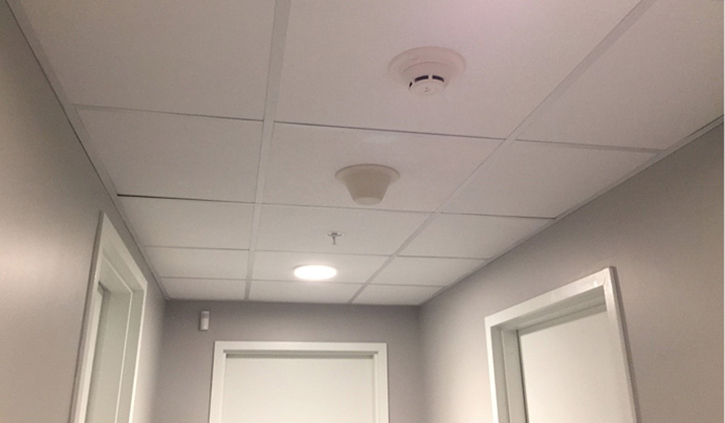 The impact is clear: Our Emergency Responder Radio Coverage ordinance has transformed a problem into a solution. The building that would have blocked signals now boosts signals. Firefighters’ life safety is improved inside and outside the new structure. With the building now fully constructed, the HFD has tested the new equipment and remarked on the improvement in communications.

Despite these improvements, our communications work is not complete. The Emergency Responder Radio Coverage ordinance applies to newly constructed buildings but does not require a retrofit for older high-rises. Therefore, we’re continuing to investigate technology such as mobile repeaters. We have also improved our protocols for using the simplex frequency. The HFD has also invested in newer, more reliable radios with multiband capability for mutual-aid partners.

The Emergency Responder Radio Coverage ordinance has been a large benefit to the community. It was a collaborative effort among various stakeholders, including the HFD, the city council, and the construction code officials. The cost to install BDAs and other equipment is minimal when planned and implemented throughout the construction process. The benefit to protect the life safety of firefighters in all new Type 1 and 2 structures in the city is priceless.

BRIAN CRIMMINS is the chief of the Hoboken (NJ) Fire Department. He has a BA degree from Boston College and an MPA degree from John Jay College.