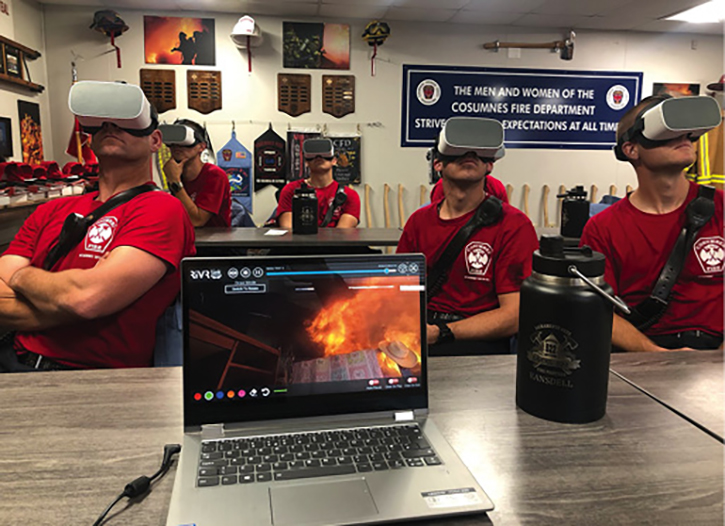 Do you remember your fire academy? The intensity of the physical training, the timed pressure to dress in turnouts, raising ladders, forcing the door, and advancing hoselines? The countless hours of classroom learning, waiting for the chance to come face-to-face with the fire? What about gearing up in your turnouts and wearing your self-contained breathing apparatus (SCBA) for your first exposure to fire?

Before heading into the flash can classroom of live fire training, did you experience deep down a daunting feeling and wonder, Do I have a good seal on my mask? Will the intense heat get the best of me? How much am I expected to learn with my adrenaline pumping, heart racing, and heightened senses? Was the instructor’s voice muffled by the Darth Vader-like SCBA noise?

Then the fire was ignited, and you were awestruck by dancing flames, the heat began to envelop you, and visibility faded to mere inches. You know this training will provide education on fire behavior, phases of a fire, and the ability to recognize the change in conditions—the precursors to a rollover, flashover, or other “hostile fire event.” You could not help but wonder, How will I absorb knowledge when it’s incredibly hard to hear over the roar of the fire and my rapid breathing, I can hardly see, and the heat is so intense? 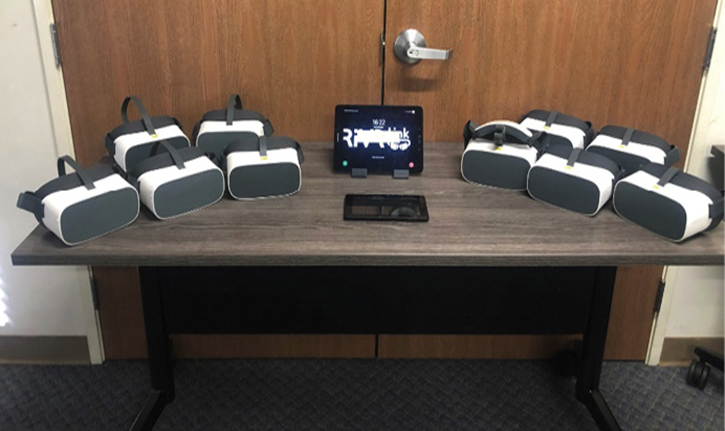 (1) The innovative technology used by the recruits is called “Classroom in a Box.” The collaborative production was made possible through partnerships with W. S. Darley and RiVR (Reality in Virtual Reality), based in Illinois and the United Kingdom, respectively, with 360 Fusion cameras donated by GoPro. (Photos courtesy of the Cosumnes Fire Department, Elk Grove, CA.)

On October 10, 2019, the Cosumnes Fire Department (CFD) (Elk Grove, California) 19-01 academy recruits received their first fire behavior training and were “caught” in flashover conditions. Several of the fires were vent-limited with zero visibility. The hottest fire “flashed”–in other words, it did what fires do. In less than two minutes, it progressed from paper in a wicker basket to more than 950ºC/1,800ºF with heat flux measurements over 50kw/m2. The heat-release rate (HRR) was twice the energy needed for near-simultaneous ignition, but the recruits experienced all these fires from the comfort and safety of their air-conditioned classroom. 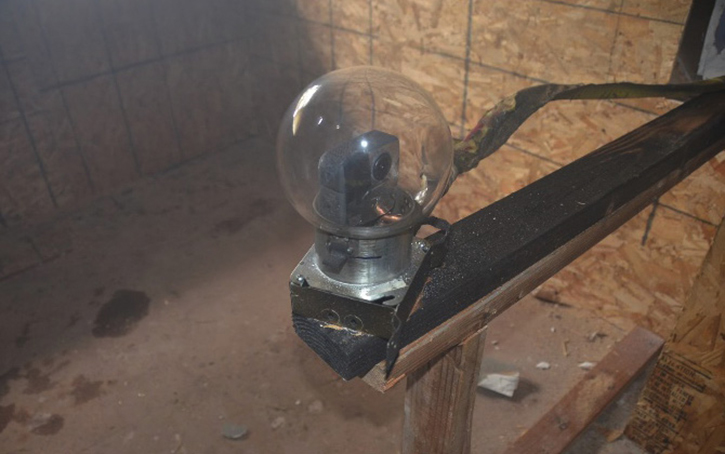 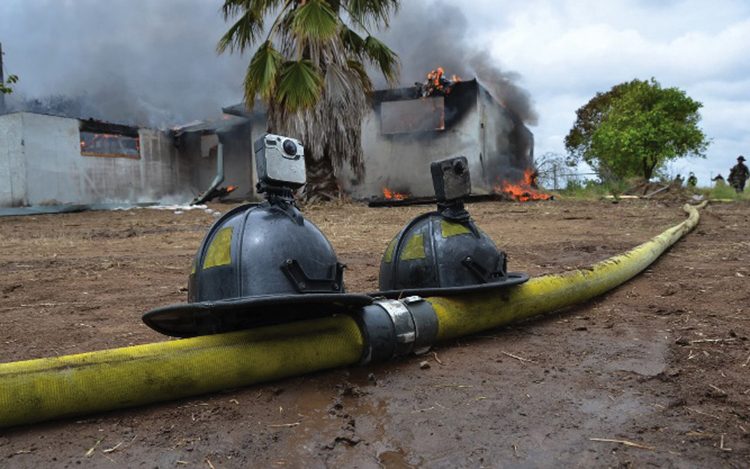 (2) (Top) A variety of 360º cameras were used to capture the burns. The interior cameras were protected with glass covers, and air was routed into the space around the bowl to keep the cameras cool. (Above) Additional data streams were captured with helmet-mounted and fixed cameras and drones with infrared cameras. (For water-cooled systems, see the National Institute of Standards and Technology’s “In the Eye of the Fire” study at https://www.nist.gov/featured-stories/eye-fire/.)

The training burns were captured by the CFD during an acquired structure training burn and separate partner test fires in support of emerging technologies with the Department of Homeland Security Science and Technology (DHS-ST) and National Aeronautics and Space Administration Jet Propulsion Lab (NASA-JPL). The “Classroom in a Box” uses a tablet or laptop linked to the user’s headset by a Wi-Fi router. The instructor can fast forward, rewind, stop, draw, instruct by microphone to the headsets, and individualize a student’s headset from the laptop with a simple push of a button.

The virtual reality (VR) system is designed to support the hands-on, tactical, and critical functional training the recruits and veteran personnel must engage in. It must be emphasized that VR is simply an adjunct to, and not a replacement for, hands-on training. Much truth remains in the words of the late Fire Department of New York Lieutenant Andy Fredericks’ address to the FDIC attendants in 2000,1 which contained the following message: “Progress, change, innovation; they are all important. But, firefighting today remains largely a gritty, risky, up-close-and-personal affair that uses tactics and techniques that date back decades.” These personal skill sets are paramount to firefighters’ success.

The recruit training started in the classroom with a lecture from CFD Battalion Chief Rick Clarke. The lecture covered heat transfer, the four stages of fire, and recognition of preflashover conditions. The recruits were then broken into three groups for rotational training stations. The first group was sent to the flash can. The second group was outside of the flash can “reading smoke.” The third group stayed in the classroom to be immersed in VR.

The first scenario for the recruits was a visual exposure to a fuel-controlled fire. The fire was a typical Fire Control 3 burn set in the center of a room and progressed through the first three stages of fire. The second fire was a ventilation-limited fire that was in a second bedroom with a similar set as the first fire but in the corner of a closet. The third fire was a 10 × 10 simulated children’s nursery with a fuel package consistent with the “real world.” The fuel package (HRR) was similar to what you would typically find in a bedroom nursery in a residential house. The fourth and final VR fire for the recruits was representative of the flash can training fire they would receive in their next group.

The recruits broke for lunch and then met in the classroom for another lecture on fire dynamics from Clarke. Flow path, heat flux, HRR, and thermal radiation feedback were discussed in the lecture. These learning objectives were achieved by again breaking the academy into three groups. The first group was in the flash can while the second group was out training with the Palmer Doll House; the third group was immersed in VR. 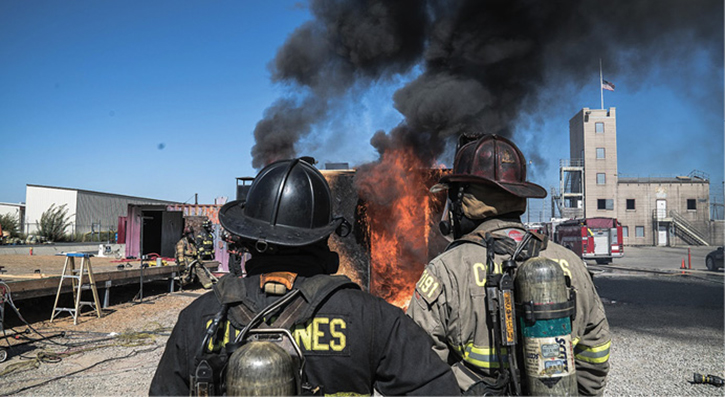 (3) The “hottest” fire of the day was conducted September 19, 2018, in DHS-ST and NASA-JPL, working on artificial intelligence for first responders, as chronicled in Fire Engineering online October 25, 2018.2 The 360 VR footage from this fire is a credit to Dr. James Mullin, Deakin University professor and FLAIM trainer. 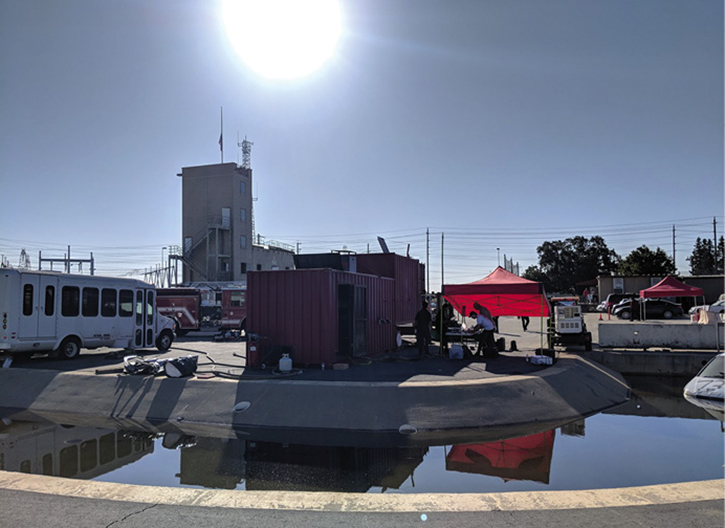 The cost vs. benefit equation is of primary interest. The value of Classroom in a Box is obvious compared to specifying and purchasing a flash can and the repeating costs of consumable fuel materials while taking units out of service and paying the instructors; it all adds up. The learning environment enables students to easily ask questions; the 360 VR incident can be paused and rewound to ensure absorption of the information. The typical fire behavior training takes multiple days and multiple burns before a recruit starts to be comfortable and can identify the key components of fire behavior and fire dynamics.

Every recruit filled out an anonymous evaluation form. Out of the 20 recruits, 80 percent thought that VR allowed them to absorb the most information. Fifty percent of the recruits thought VR reinforced the lecture the best. The most common written notes were that VR allowed the student to ask questions while the “fire” was paused. They also were able to watch the “fire” multiple times and pick up on important things that they would have missed.

The CFD started this project to train and educate the next generation of firefighters as well as our current firefighters. Training firefighters today is more difficult than ever. The cost to have burn instructors, materials, and the ability to burn on any given day has challenged us to look for alternative ways to conduct training. VR is a reliable way to enhance our training. It cannot replace the heat, smoke, and flames from the flash can, but one can enhance the level of student information absorption with VR. 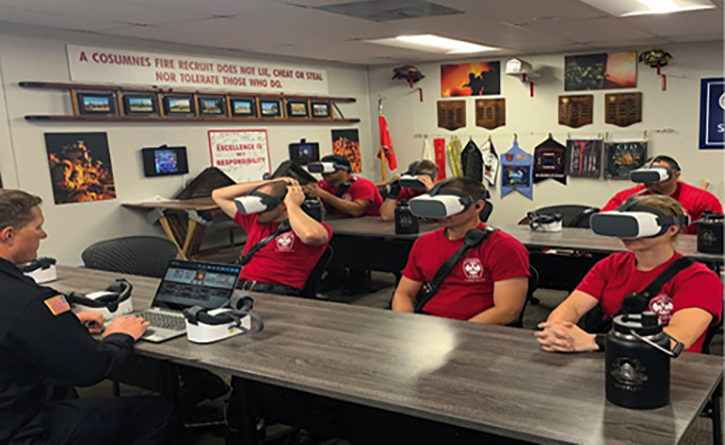 (5) The virtual reality group was immersed in four fires. All four of the fires were taken into flashover through different means.

(6) In less than two minutes, the crews will experience fire to the floor from the comfort of a classroom. 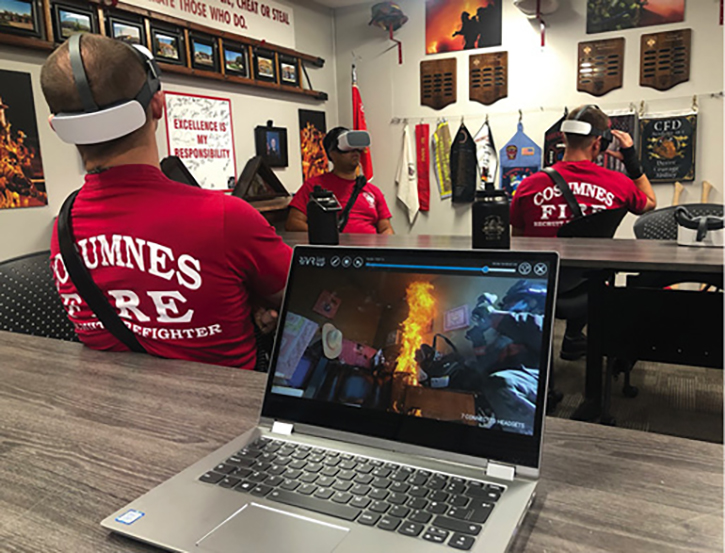 (7) The recruits were shown the same fires as before, but the concentration was on fire dynamics. They were able to watch subtle things that happen in a fire that are often missed in real-time “actual” reality. They were able to see this over and over from the learning environment of a classroom vs. being caught in full-room involvement.

Although this is only one day of a six-month academy, this training day reinforces the importance of the many other topics in which the recruits have received training such as ventilation, hose, nozzles, hose management, nozzle stream and reach, and aggressive fire attack. The advantages and disadvantages of various hands-on task completion techniques for many subjects have been ingrained into each recruit. Each recruit will continue to train on the drill grounds, pulling hose, moving hose, and flowing water. As Firefighter Aaron Fields of the Seattle (WA) Fire Department and lead instructor for the hands-on training class Nozzles Forward at FDIC International says, “No one has ever died with the nozzle open.”

Hands-on tactical training must and will remain the predominant need for fresh and veteran frontline personnel into perpetuity. Concurrently, with a worldwide slowdown because of the COVID-19 virus, we as an industry must push for new and effective ways to instruct, train, and advance our industry for our fellow firefighters and those they are privileged and sworn to serve.

Bobby Halton, editor in chief of Fire Engineering and FDIC International education director, sees it as follows: “The best way to look at the evolution of firefighting is that everything we’re talking about in the ‘smart world’ will augment, assist, improve, and enhance the capabilities of those brave men and women who are willing to risk putting their fragile humanity up against the dynamically complex world of physics where extremely painful fatal consequences await anyone regardless of preparation, education. or equipment due to the randomness of dynamic complexity. Smart technology will help us improve the odds, and that relentless pursuit of perfection will take another step forward.”

JUSTIN QUARISA is a firefighter/paramedic and an EMS, technical rescue, and VR specialist.

JULIE RIDER, a captain and public information and communications specialist, has more than 20 years as a front-line firefighter.

KIRK McKINZIE, a retired captain, founded 911-Go. He is a SMART community risk reduction protagonist and an adjunct professor on next-generation technology at the University of Cincinnati.

Drill of the Week: Physical Fitness I