Thick, acrid, black smoke could be seen for miles after a building caught fire on Saturday, June 15, 2013, on the outskirts of downtown Indianapolis, Indiana.

The Indianapolis Fire Department (IFD) along with seven other area fire departments put the term “mutual aid” to the test as they valiantly fought the large fire for more than hours before bringing it under control. Firefighters from IFD, Wayne Township, Pike Township, Speedway Fire, Decatur Township, White River Township, Airport Fire, and City of Lawrence persevered despite obstacles that forced them to adjust their strategy several times throughout the firefight. Crews had to deal with interior structural collapse, exploding propane tanks, difficult private hydrant access, high winds, CSX Train tracks, and spot fires caused by flying embers.

The former Link Belt factory building sits in a complex type area with a few private hydrants, however firefighters do not rely on the private hydrants to provide substantial water and pressure. Engine crews were faced with utilizing long supply line layouts to reach the city hydrants located around the area, which included laying lines across CSX Train Tracks. Although CSX was cooperative from the outset, halted incoming trains, one train that did not have time to stop ran over a 5-inch in supply line, splitting it in half, and forcingfirefighters to regroup and lay more lines. The tracks continued to be shut down for the next seven hours.

An interior collapse and approximately 30 exploding propane tanks (30 gal each) kept firefighters at a safe distance while mitigating the situation. Periodic loud booms could be heard throughout. One area of concern was a 500-gallon propane tank inside the building. Quick action by firefighters placed a master stream on the tank keeping it cooled. Maintenance personnel stated that only a ¼ of the tank was full (about 125 gallons) and was believed to have vented itself during the fire.

Destroyed by heavy fire, approximately 60 percent of the building collapsed. Large flying embers and brands became a problem when nearby buildings and dumpsters began catching on fire due to the strong winds. Several on scene units were allocated to a building across Belmont called Belmont Warehousing to extinguish a roof fire. That second fire took about an hour to put out and the building was monitored for additional embers the rest of the night. The dumpster fire was attended to in quick order. Reports of embers showing up downtown were called into 911 dispatch but no other fires were reported.

Indianapolis (IMPD) police officers and command staff were an integral part of the success of this fire operation from the start. Immediately securing a perimeter, IMPD command staff, district and patrol officers, ERG units and reserve officers coordinated an evacuation of the five block area east of the burning building due to the toxic smoke. More than 100 homes were evacuated by IMPD and residents taken by IndyGo busses to the Red Cross Building 441 E 10th street for shelter.

IEMS Medics checked out several residents complaining of difficulty breathing but none were transported. The Marion County Health Department, Environment Protection Agency, and the Agency for Toxic Substances and Disease Registry (ATSDR), a division of the Center for Disease Control, are monitoring the air quality and will decide when the evacuated homeowners can return.

Mayor Greg Ballard came to the scene early in the incident and offered his support to the firefighters and police officers. Department of Homeland Security assisted with concerns expressed by downtown area businesses making sure resources and information were made available. At the request of IFD, Citizens Water boosted pressure twice to the area city hydrants to assist with firefighting efforts. Indianapolis International Airport was also notified due to the large amount of smoke in the air but did not need to divert air traffic. The City of Carmel Fire Department sent apparatus to cover IFD stations and take runs in the downtown area. Indy Parks stepped up to offer two community parks for shelter if needed. The Department of Code Enforcement was on scene and will return once the fire is completely out. The fire is expected to smolder for several days. Investigators hoped to begin their investigation on Monday.

The coordinated suppression effort to extinguish the spot fires continued by IFD Firefighters 30 hours after the initial fire dispatch on Saturday. Suppression crews on scene were reduced to two aerial ladders and 2 engines. Several command staff officers continued to monitor the progress for a total of about 20 firefighters.

Four firefighters suffered minor injuries in the incident. Below some pictures of the structural damage to the Belmont Building caused by the fire. 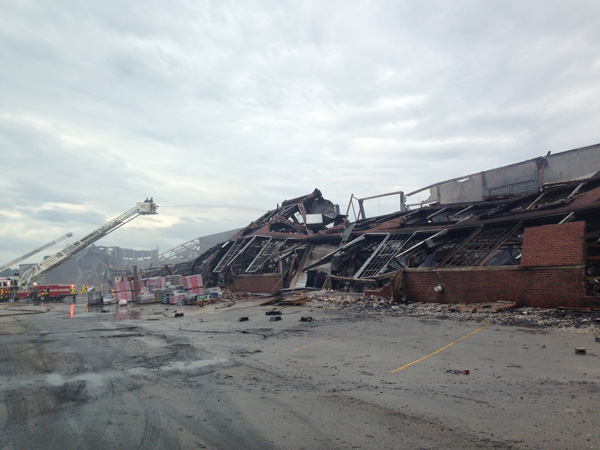 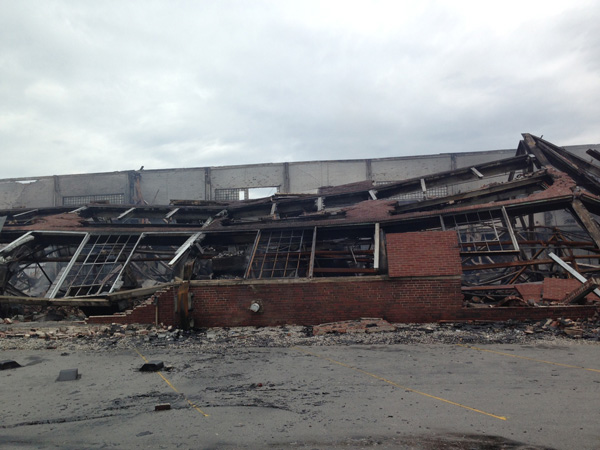 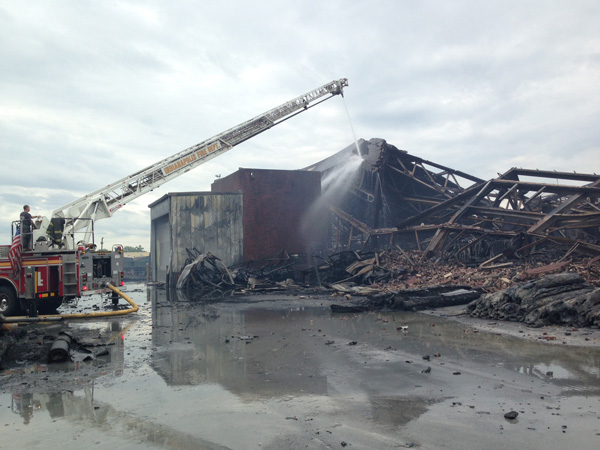 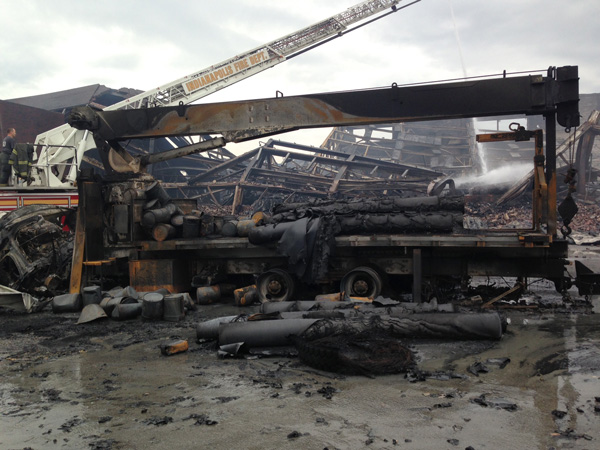 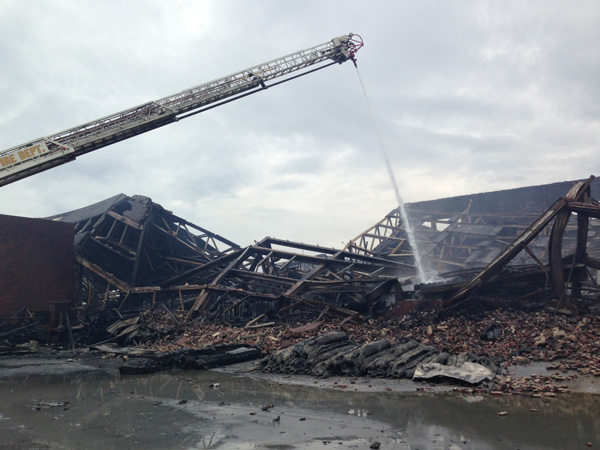 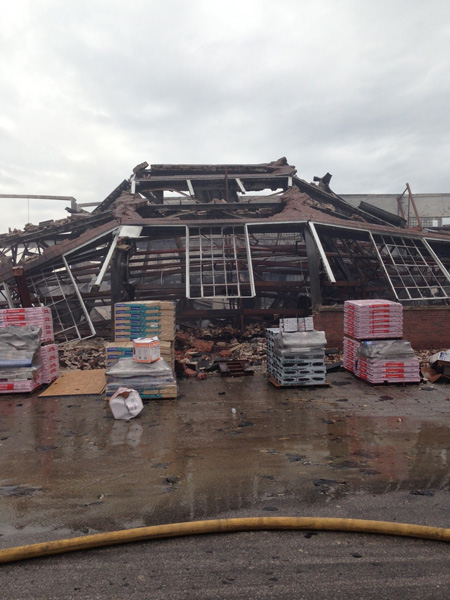 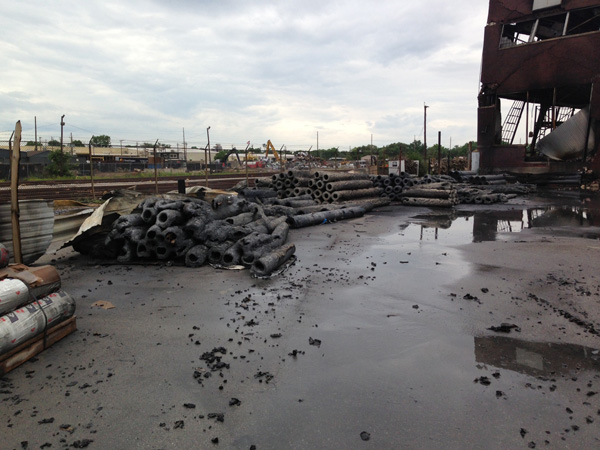 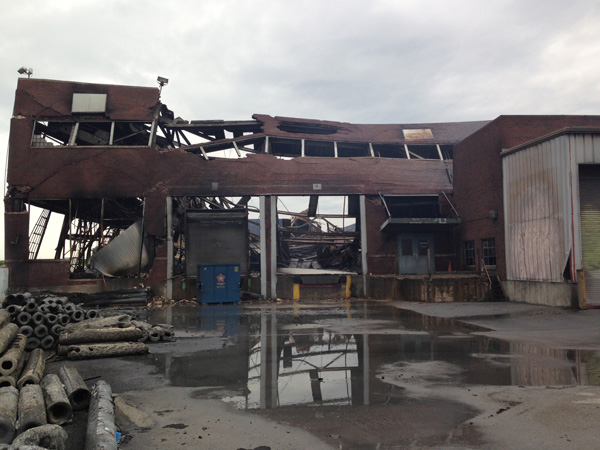 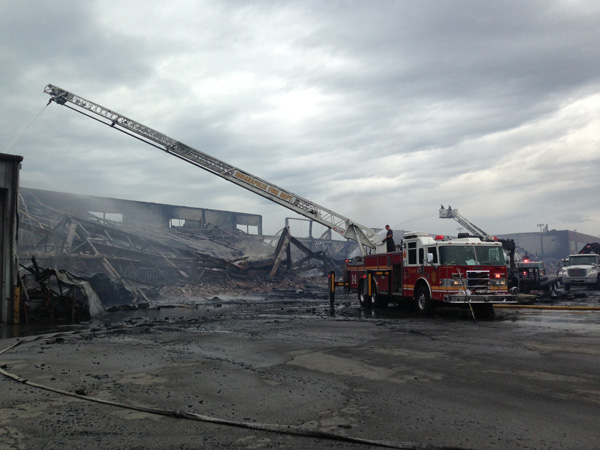