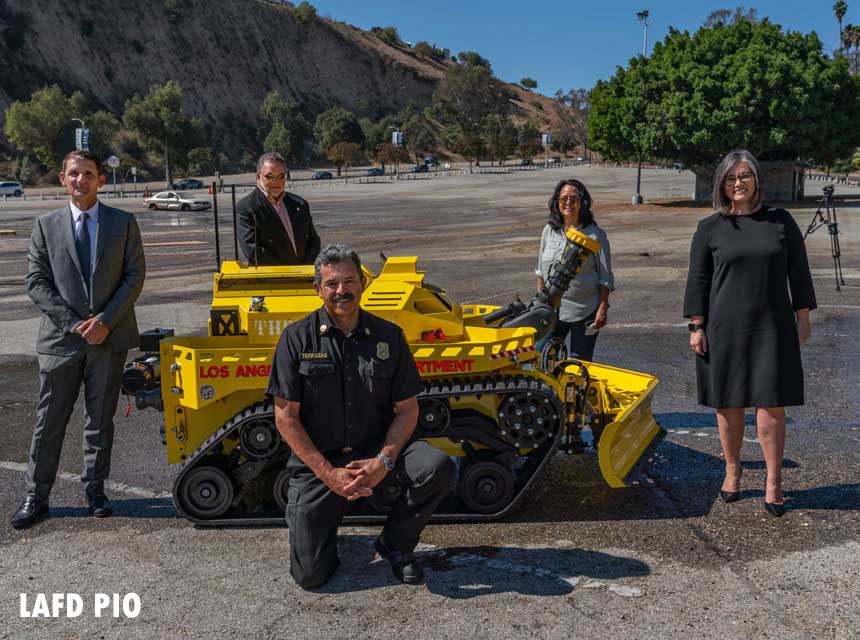 But this mini robot tanker is an inferno buster that pack a powerful punch of water or foam and can go where firefighters otherwise can’t. The LAFD on Tuesday became the first fire department in the nation to acquire the Robotics Systems 3, a droid on steroids.

LAFD Chief Ralph Terrazas said firefighters put their lives on the line when battling blazes. This year, 11 LAFD crew members were severely injured when a fireball engulfed four downtown buildings after a massive explosion that was ignited by hazardous materials.

Now, firefighters can use RS3 as a safer alternative in battling potentially explosive blazes and it allows the department to get inside a burning building when humans could not dare enter safely.

“I can afford to lose one of these wonderful machines, I cannot afford to lose a firefighter,” Terrazas said, admiring the control pad that remotely operates the firefighting drone.

On Tuesday morning, as flames engulfed a pair of industrial textile buildings in downtown L.A., firefighters did not enter alone. RS3 rode shotgun for the first time, Terrazas said.

As more than 130 firefighters battled the blaze, the droid got its first run maneuvering inside a fire so dangerous that department officials pulled crews from within. Terrazas said it used it plow front end to push its way into the burning structure. The robotic vehicle the size of a Smart car can turn on a dime and fit through a set of double doors.

In fires like the one Tuesday, the danger of collapse is such that firefighters have to pull back and go what they call defensive, spraying water from outside, Terrazas said. That is often effective to a point.

But the RS3 is a “game-changer,” Terrazas said. “We can fight the fire from inside.”

It can blast of 2,500 gallons of water or foam per minute — enough power to knock someone off their feet. Admiring the spray during a demonstration Tuesday next to the LAFD training facility, Terrazas said it can knock out walls and roofs.

“You can turn the water cannon vertical and turn it into its own sprinkler system,” he said. “It may make us rethink some of the ways we tackle fires when it’s available.”

It had its own RoboCop moment at Tuesday’s morning fire when it wheeled off the back of the trail and headed past firefighters up to the blaze. LAFD Capt. Erik Scott said firefighters who have seen everything over the years couldn’t keep their eyes off it. The RS3 had been diverted from its trip to a planned demonstration at LAFD training facility near Dodger Stadium.

During a demonstration Tuesday, it unleashed thousands of gallons of water, pushed a Chevy Celebrity like a USC lineman with its plow and sped over an assault course of railroad ties with its grippy treads. While designed for more urban uses, it is capable of ascending a 70-degree slope.

A firefighter can operate the robot remotely or can be tethered to it. A heat-shielding apparatus allows it to be operated for up to 10 hours. And its 5,000-pound winch can tow up to 1,750 pounds.

The technology behind the department’s latest firefighting tool has been used in Iraq, Afghanistan and elsewhere around the globe. Oil companies already enlist such flame terminators.

The chassis is patterned after U.S. Army robots — used to destroy improvised explosive devices — built by the same company, Howe and Howe Technologies, the brains behind the Ripsaw super tank. The chassis, designed to help disarm IEDs, has been tested at Aberdeen Proving Grounds and was found to be one of the most durable built.

It joins a fleet of other robots on the Los Angeles city roster, including the LAPD Bomb Squad‘s BatCat — a 39,000-pound remote-control vehicle that looks like a forklift truck on steroids and has a massive telescopic arm.

Like the BatCat, the RS3 can be the eyes and ears for its human counterparts in a potentially explosive situation. With multiple high-definition video cameras as well as an infrared camera, it can help locate people and the source of flames. Terrazas said the RS3 can literally wheel right up to the heart of the fire.

The RS3 is also assigned to Fire Station 3, one of Los Angeles’ busiest, as part of the Urban Search and Rescue team.

L.A. City Councilwoman Monica Rodriguez, the daughter of a firefighter who joined the department in the 1970s, said that she is amazed at the advances in safety since her father’s days fighting fires and that the machine makes the lives of firefighters so much safer.

“Los Angeles continues to be at the forefront of innovations,” she said, speaking alongside Terrazas. Rodriguez noted it was not public funds but fundraising by the nonprofit LAFD Foundation that made the acquisition possible. The money, she said, is much needed, “particularly when our budget has been so slammed by COVID-19.”

The foundation raised $272,000 to purchase the first-of-its-kind robot, according to Terrazas. The LAFD added a plow and a bunch of extra bells and whistles. The major donors that funded the RS3 include the foundation of billionaire tech entrepreneur Elon Musk.

Whether more robots will be added to LAFD ranks remains to be decided. Terrazas said this one can reach much of the city in a short period but given the size of Los Angeles, it does make some sense to consider staging others in locations across the metropolis. But, he said, a lot of that depends on how things go with the new firefighting machine.