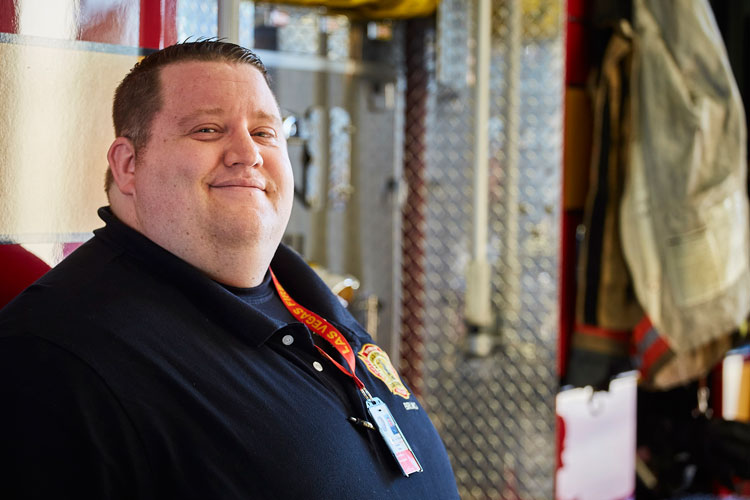 On October 6, the American Red Cross of Southern Nevada will hold its annual Everyday Heroes Awards Breakfast. One of the honorees is Anthony Bruno, Las Vegas (NV) Fire & Rescue Communication Specialist. Anthony works as a fire dispatcher at the LVFR Fire Alarm Office, which is the 911 communications center for fire and emergency medical calls in Clark County.

In the dead of night on March 5, 2016, Anthony left work and came across a serious vehicle crash on a remote stretch of US-95. He pulled off the road to watch the LVFR crews, including the Heavy Rescue unit, help extricate people from the wrecked vehicles. The patients were transported to local hospitals and crews began to leave.

As Anthony returned to his own vehicle, located on the other side of the road, he thought he could hear strange noises coming from the distance. He paused and listened to the sounds again. This time it sounded like someone moaning. Anthony decided to investigate and found another vehicle that had been involved in the previous crash. This vehicle, located far away from the road and in the desert, was overturned with a victim pinned inside.

Anthony rushed back to the original crash site to find a Nevada State Trooper still on-scene. He told the trooper that the responders had to turn around quickly and help this newly discovered victim.

Shortly after, firefighters were able to extricate the victim and transport him to the hospital. He had critical injuries, but survived.  Without Anthony Bruno’s attentiveness, this victim would never have been seen, or heard before it was too late. Anthony’s quick thinking saved this person’s life, which is why he is a 2016 Red Cross Everyday Hero.

The Red Cross would like to thank Anthony, and all of the other Everyday Heroes that will take the stage on Oct. 6 for their selflessness and heroic actions. They are all truly inspiring to the Red Cross and Southern Nevada community.

CLICK HERE for more information on the 2016 Red Cross Everyday Heroes Award Winners or how to become a sponsor of the event. Proceeds will go towards supporting the Red Cross mission in Southern Nevada.