After World War II, many retired couples moved to the Miami, Florida, area to escape the harsh winters in the Northeast; hundreds settled in modest singlewide mobile homes in one of the area’s many trailer parks. These trailers were manufactured well before 1976 Federal Department of Housing and Urban Development (HUD) regulations were established to improve mobile home fire safety. One of the most important improvements required by HUD regulations was limits on the flame spread ratings of interior finishes. Mobile homes manufactured before 1976 are likely to have interior walls and ceilings of flimsy wood paneling or low-density fiberboard, which readily ignites and rapidly spreads fire to flashover conditions. 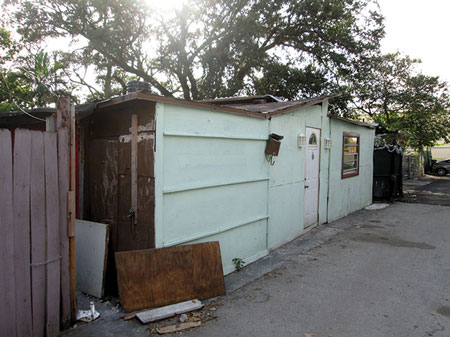 Today, most of these old mobile homes are now occupied by large families, predominantly from Central America, who have immigrated to the Miami area in search of a better life in the United States. To ease overcrowding, they commonly build additions on singlewide trailers-additions that are nothing more than poorly constructed wood-frame shacks that lack adequate exits and reduce what is already close spacing between lots. Some enterprising trailer owners build two or more additions and rent them as single-room occupancies. The 1950s vintage trailers (photos 1 and 2) have wood additions built on each side. 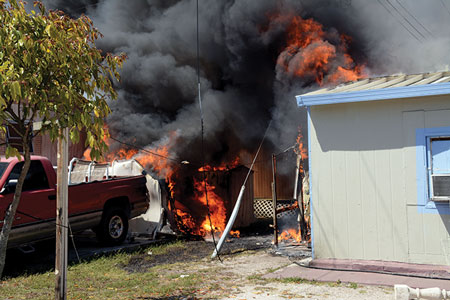 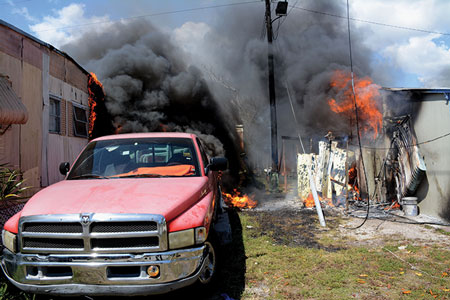 In photos 3 and 4, fire extended from the trailer of origin to the addition of the adjoining trailer; electric service wires were down. The hazard of fallen wires is multiplied when mobile homes are involved in fires because their metal roof and exterior walls can become energized. Similarly, wires that fall on chain link fences that commonly divide lots become an additional electrical hazard for firefighters. 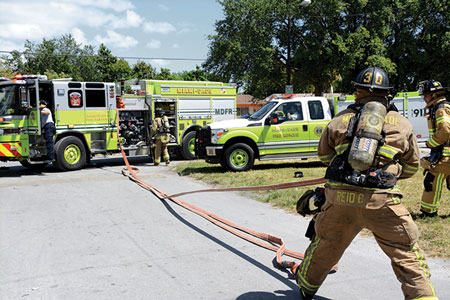 In photo 5, the engine company stretched a 150-foot, 1¾-inch crosslay preconnect configured in a “triple layer” load. The hose was connected and stacked in three layers before loading in the crosslay bed. Crews deployed it by pulling all three layers together; hence, a 150-foot preconnect will clear the crosslay bed when it is pulled 50 feet from the apparatus and will lay in an “S” formation ready to be charged.

Fortunately, the apparatus could be spotted at intersecting drives in the trailer park, which permitted firefighters to pull the crosslay at right angles to the apparatus. This, however, is rarely possible at fires in trailer parks because typically narrow streets obstructed with parked vehicles often block the passage of apparatus and interfere with pulling hose from crosslay hosebeds. 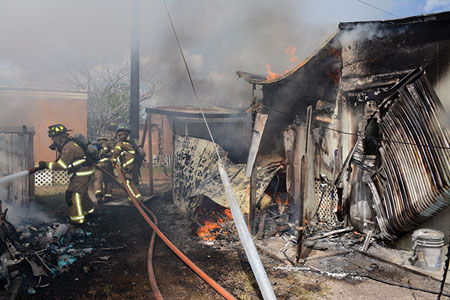 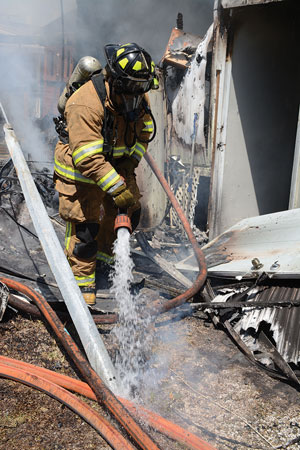 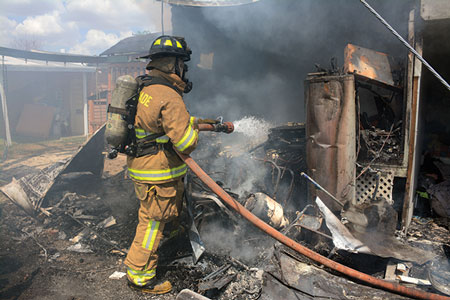 Photos 7 and 8 show a common problem of fighting mobile home fires: Hot metal and molten aluminum can melt the synthetic jackets of hoselines and cause them to fail. In photo 7, a firefighter directed a stream back on his hoseline to cool it. Years ago, fire hose was commonly covered with two jackets of woven cotton. Old hose, constructed with natural materials, was heavier and required more care than modern hose; but modern hose, constructed with synthetic materials, does not withstand contact with fire and hot surfaces as well as older hose. In photo 8, a 20-pound liquefied petroleum (LP) gas cylinder lay in the debris. As is customary in their homeland, these immigrants/occupants commonly keep LP cylinders inside their trailers and connect them right next to their stove. 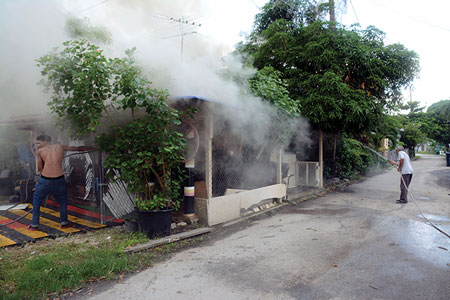 Miami-Dade (FL) Fire Rescue Department companies responded to a trailer fire that rapidly reached flashover while they were stretching hoselines. In photo 9, two civilians attempted to control the fire with garden hoses. Arguably, civilians extinguish many fires successfully using a garden hose before firefighters arrive. Additionally, a garden hose in the hands of truck or rescue company firefighters can be very effective in confining a fire before the arrival of an engine company. However, the following problems can arise when civilians attempt to fight fire with a garden hose: 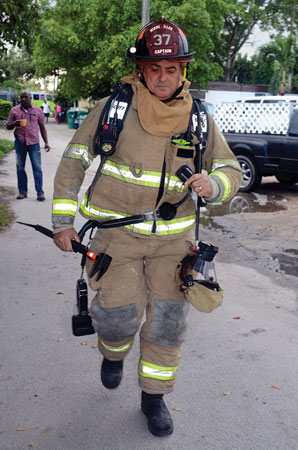 In photo 10, the captain of the first-arriving engine company ordered his crew to “stand fast” while he walked into the trailer park to conduct a size-up. This takes discipline because of firefighters’ natural inclination to immediately take action. Additionally, they are often approached by excited civilians who attempt to direct their apparatus toward the fire and who become angry when firefighters do not heed their instructions. A fast-spreading fire in a congested trailer park is an excellent example of why fire officers cannot allow civilians to do their size-up.

A primary size-up consideration is access for apparatus and hoselines. The precise location of the fire and how to reach it may not be visible from the street. A company that goes to work before a proper size-up can position the apparatus on the wrong street in a trailer park or under electric wires that may fall. Additionally, narrow drives in trailer parks may be impassable for apparatus, particularly at night and on weekends when they are blocked by parked vehicles. A company that attempts to drive into a trailer park without its officer walking ahead to see if streets are passable can turn the first corner and find the apparatus jammed between a trailer and a parked car.

In many cases, including this fire, it is better to position apparatus at a street entrance to the trailer park and hand stretch hose to the fire. This positions the engine closer to hydrants, which are rare inside trailer parks, and avoids exposing the apparatus to radiant heat, exploding LP cylinders, and falling electric wires. This fire officer had to accurately predict the fire’s progression to determine where the fire would spread before his company got hose on the ground and water on the fire.

Fires in trailer parks spread rapidly because of the close proximity of exposures. A miscalculation can result in firefighters trying to play “catch up” with a fire that has spread past their position. 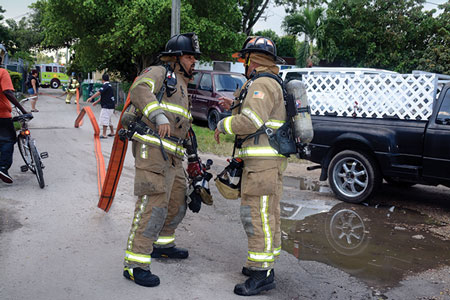 In photo 11, firefighters, with the unsolicited help of a civilian, hand stretched three-inch hose toward the fire. The three-inch hose can stretch beyond the reach of the 200-foot preconnect hoselines and can adequately supply two 1¾-inch hoselines using a wye without excessive friction loss. 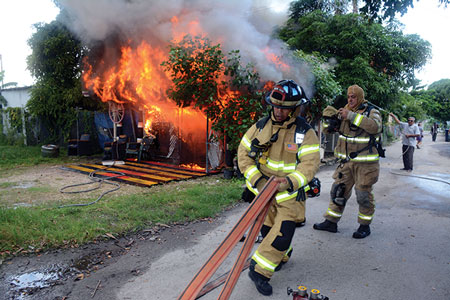 In photo 12, a firefighter stretched 1¾-inch hose to the wye. Firefighters pulled the hose from a crosslay preconnect bed and rapidly disconnected it from the apparatus using a 10-foot “pigtail” section that remained connected to the swivel outlet in the crosslay hosebed. 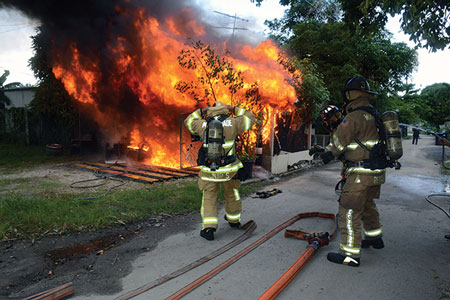 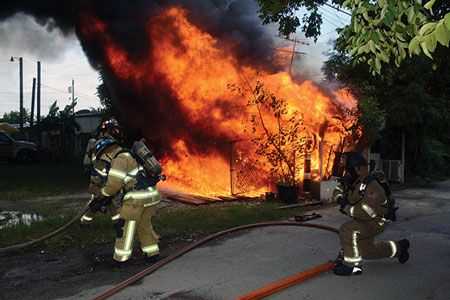 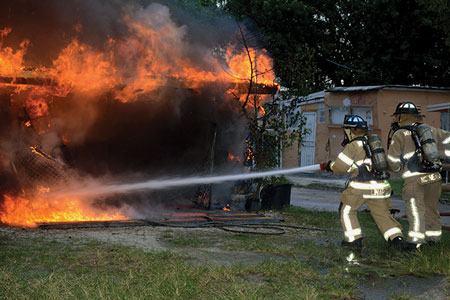 In photo 14, the 1¾-inch hoseline was charged; in photo 15, the company began the attack. Members’ intention was not to completely extinguish the fire from the exterior but to knock down as much fire as they could before advancing their hoseline inside. This was not a defensive tactic; it was an aggressive interior attack that began outside. Their intention was to take heat energy away from the fire in the fastest and most direct way possible. 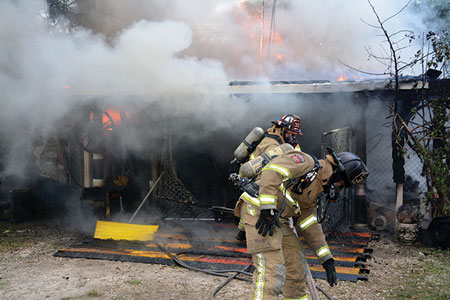 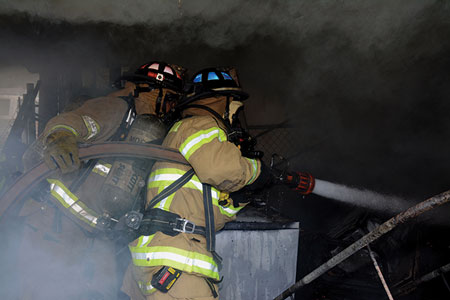 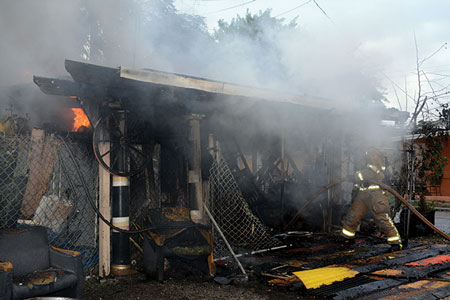 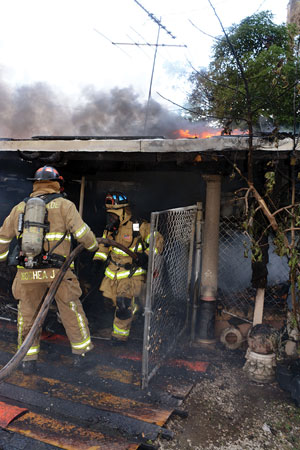 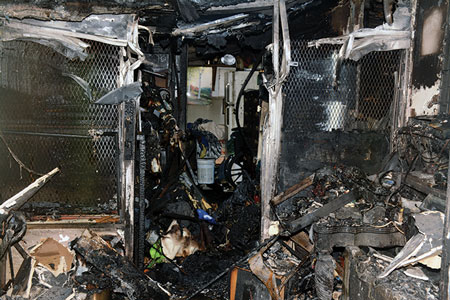 In photo 19, the officer and nozzle firefighter backed out because hoarder conditions (photo 20) blocked their advance. 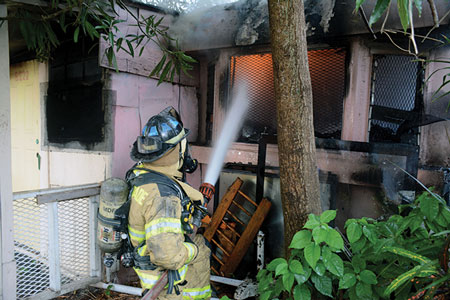 In photo 21, the hoseline was repositioned to the exterior and a stream was directed through a window covered with wire mesh for security. Note the stream’s angle and pattern: A straight stream was directed upward at a steep angle from the bottom of the window and impinged off the underside of the ceiling. Although it was not a factor here, this would allow steam to vent from the upper portion of the window. This technique was validated by the Fire Department of New York in collaboration with the National Institute of Standards and Technology and Underwriters Laboratories as a result of their research conducted on Governor’s Island in New York in 2012. 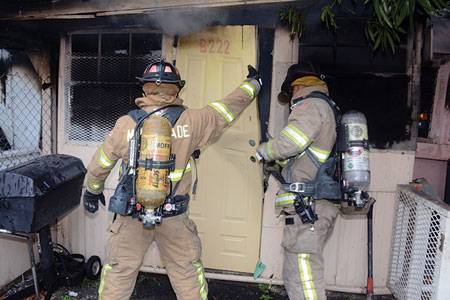 In photo 22, firefighters forced a door to the trailer’s addition with a halligan and an eight-pound ax to gain access for overhaul. The door, consisting of a polystyrene foam core and metal cladding, is typical for this type of residence and is relatively easy to force. As a consequence, such doors are commonly fortified with heavy iron security gates. 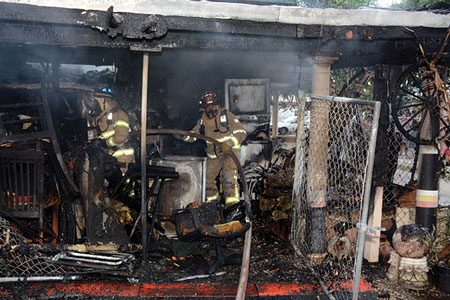 In photo 23, firefighters found overhaul difficult because of the amount of contents inside the trailer. This is a common problem with trailer fires in this area because many residents come from poverty-stricken countries and are not accustomed to discarding anything of value. 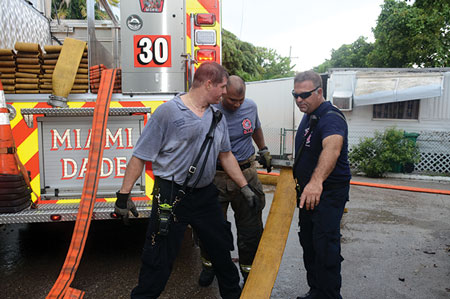 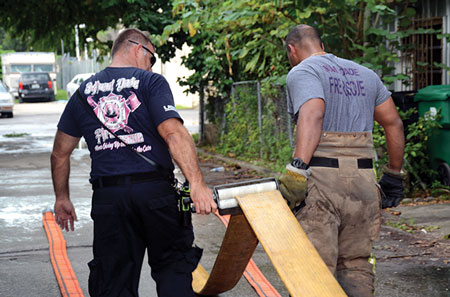 In photos 24 and 25, firefighters picked up their five-inch supply line laid from a hydrant to their apparatus. They had to drain water from the hose and purge the hose of air before reloading it in the hosebed. Large-diameter hose that is not purged of air can resemble an air mattress and take up too much room in a hosebed. To purge the air, you can connect a Storz cap to one end of the hose and use a hose roller. Rolling the hose toward the uncapped end creates a partial vacuum, which flattens the hose.

BILL GUSTIN is a 42-year veteran of the fire service and a captain with the Miami-Dade (FL) Fire Rescue Department. He began his fire service career in the Chicago area and conducts firefighting training programs in the United States, Canada, and the Caribbean. He is a lead instructor in his department’s officer training program, is a marine firefighting instructor, and has conducted forcible entry training for local and federal law enforcement agencies. He is an editorial advisory board member of Fire Engineering and an advisory board member for FDIC. He was a keynote speaker for FDIC 2011.