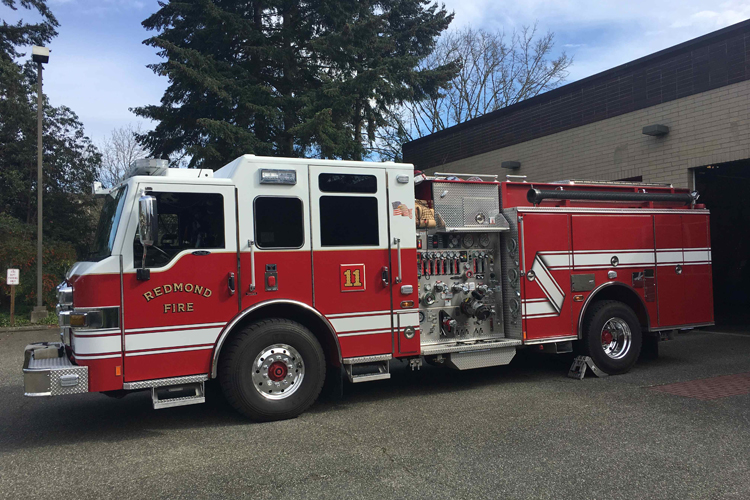 “The Redmond Fire Department responds to a wide range of challenges—everything from fire suppression and emergency medical services (EMS) to wildland firefighting—and relies on its equipment to perform at a very high level,” said Matt McLeish, senior vice president of sales and marketing of the Fire & Emergency segment. “We’re excited that these powerful, versatile, and innovative Pierce Velocity apparatus are now on duty in the home city of Microsoft and Nintendo of America.”

“Over the course of my 35-year career in heavy equipment industries of all types, I’ve learned that the price tag is only the beginning of the cost of ownership,” said Doug Jones, Redmond Fire Department’s fleet manager for the past decade and someone who plays a significant role in vehicle purchases. “I’ve told my colleagues that the Pierce product is superior in terms of quality, reliability, and dealer support.”

Mike Hilley is the Redmond Fire Department Medical Services Administrator, health and safety officer, and head of its EMS Division. “Our protection area is similar to other suburban departments, but it presents some unique challenges, including the wildland urban interface issue,” said Hilley. “The new Pierce Velocity engines will spend 90 percent of their time working the suburban neighborhoods, but they will also support wildland response throughout the county. The aerial platform will serve the city’s urban and commercial areas, including the Microsoft and Nintendo of America campuses.”

The pair of identical Pierce Velocity pumpers each feature a big block Detroit DD13 500-hp engine, TAK-4® independent front suspension, Command Zone™ advance electronics, and side roll and front impact protection systems. The vehicles offer seating for four firefighters (with a seatbelt monitoring system), a wide range of compartmentation for rescue tools and equipment, and an EMS cabinet inside the cab. Each vehicle’s firefighting system includes a 1,500-gpm single-stage pump, a Husky™ 12 single-agent foam system, and a 500-gallon water tank.

All three apparatus include idle reduction technology (IRT) to reduce engine emissions, prolong engine life, and improve air quality. “At an emergency scene, IRT allows us to shut down the main engine unless we’re in pump mode,” Hilley explained. “We’ll be able to run all vehicle systems with the IRT system while a small generator charges the vehicle’s batteries.”

“Our entire community is on board with clean and green technologies,” Jones added. “The IRT system will cut down on pollution, and it is so quiet that crews hardly realize it’s running. Plus, when the little generator is running, the big expensive engine is not subject to wear. That’s another big benefit.”

Some Ohio Townships Give Columbus More Fire and Medic Help Than...