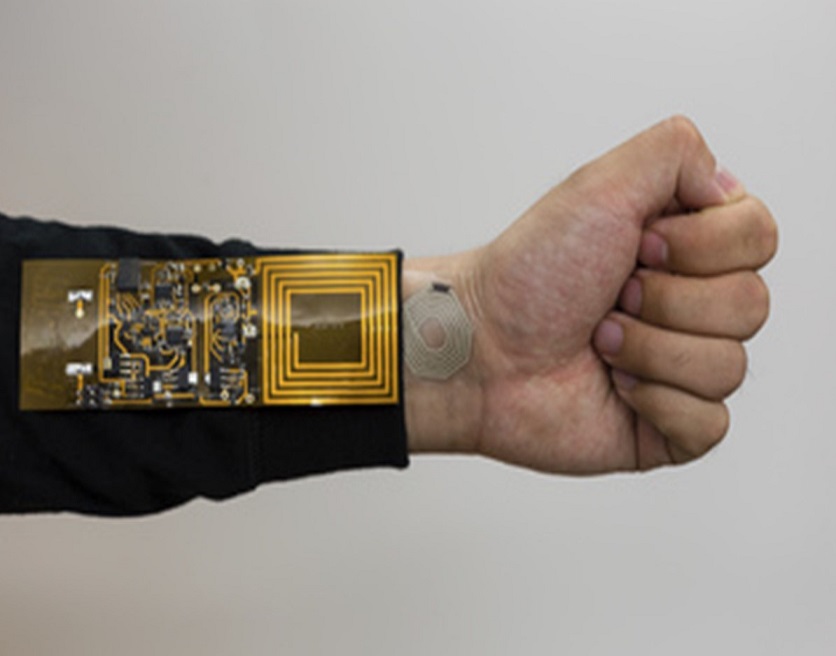 A soft, stretchable experimental battery developed by researchers at the Stanford School of Engineering uses a special type of plastic to store power, which the developers say is safer than the flammable formulations used in conventional batteries. Polymer electrodes have been used in lithium ion batteries to transport negative ions to the battery’s positive pole for some time now. However, they have been in the form of flowable gels that sometimes could leak or burst into flame.

“Until now, we haven’t had a power source that could stretch and bend the way our bodies do, so that we can design electronics that people can comfortably wear,” says Zhenan Bao, a chemical engineer who, with Yi Cui, a materials scientist, developed the stretchable battery.

In lab tests, “The experimental battery maintained a constant power output even when squeezed, folded, and stretched to nearly twice its original conventional battery.

One potential application for such a battery would be to power stretchable sensors that stick to the skin to monitor heart rate and other vital signs as part of the BodyNet wearable technology being developed in Bao’s lab. The team is working to increase the stretchable battery’s energy density, build larger versions of the device, and run future experiments to demonstrate its performance outside the lab. No timeline has been set for further testing.

The National Institute of Standards and Technology (NIST) is sponsoring the CHARIot Challenge. The Challenge consists of two contests: one based on augmented reality (AR) and the other on the Internet of Things (IoT). NIST says the entries must offer “solutions that deliver first responders [specifically, incident command officers and “boots-on-the-ground” first responders] AR interfaces leveraging data streams from buildings and city sensors.” The solutions are meant to assist first responders in the areas of wildfires, floods, active-shooter scenarios, and tunnel collapses. The interfaces should improve decision making and the capability to deploy resources.

Partnering with NIST in the Challenge are the First Responder Network Authority, Magic Leap, FirstNet, Built with AT&T, MSA Safety, and Blueforce Development Corporation. Total cash prizes of $1.1 million will be awarded to the contest winners. Submissions have been accepted since March 11, 2020. The final phase of the CHARIoT Challenge will end on November 18, 2020. Additional information is at https://www.challenge.gov/challenge/chariot.

Ever since the loss of six firefighters in a five-alarm fire in Worcester, Massachusetts, in 1999,  the Department of Homeland Security (DHS) has been on a quest for an accurate locating system that can be used inside a structure—including above and below grade—to guide the lost firefighters out and to navigate rescue teams in. The six firefighters lost in this fire were among the 73 responders dispatched to the smoke-filled warehouse. They became lost inside the building’s tight corners and ran out of oxygen.

A partnership between NASA Jet Propulsion Laboratories (JPL) and the DHS Science and Technology Directorate (S&T) has yielded the POINTER technology, which, according to Greg Price, first responder portfolio director for DHS (S&T), “will truly be a life-saving game changer.”

A research team at NASA JPL has developed the Precision Outdoor and Indoor Navigation and Tracking for Emergency Responders (POINTER) technology, which can identify a location reliable to within one meter. A command post can visualize the near specific location of the first responder wearing the mobile receiver about the size and weight of an iPhone 11. In addition, the new three-dimensional tracking system can identify the location, orientation, and floor on which the responder is for structures two to three stories high.

The POINTER system employs magneto-quasi-static fields (MQS) and the theory and algorithms developed by Dr. Darmindra Arumugam to analyze the electrical and the magnetic components of MQS fields – all of which are key to interpreting the MQS fields and their signaling. These fields don’t behave like radio and GPS waves; they can penetrate walls, offer increased non-line-of-sight capabilities, and even sense the different orientations of devices, alerting a team commander to whether a firefighter is crawling along the ground or standing still. This is where POINTER sets itself apart; it does not have the limitations of radio and GPS technologies, particularly inside of buildings.

The POINTER system will be unobtrusive to the first responder and will be self-deployed on arrival and activated at the emergency or incident scene. Transmitters will elevate from the fire engine while MQS fields transmit signals through any building materials. In the scenario where a responder becomes immobilized by fallen debris while in a building fire, the responder’s mobile receiver will signal the responder’s condition to the visualization system at the command post’s screen. The rescue team triggered by this notification will know the precise coordinates of the  location of the fallen responder.

The fire service has had input in this research: “POINTER is a great example of leveraging research across government in a way that allows for first responder input to create a product that can be game changing,” notes Josh Dennis, first deputy director of Chicago’s Office of Emergency Management and Communications. San Diego firefighter Steve Vandewalle observes, … “Anyone who puts their life in peril by entering a hazardous environment in which they could become lost or disoriented will soon have a tool at their disposal to know exactly where they are, as will rescue teams tasked with finding them when their need is greatest.”

The POINTER technology is set for commercialization in 2021 and will be available to all first responders. Version one will be designed for use in single-family homes, warehouses, and buildings that are three stories or less. Future versions will accurately track first responders in high-rise buildings, outdoors, and subterranean environments at a greater distance. For more information about POINTER, contact First.Responder@hq.dhs.gov/.

Nanoengineers at the University of California—San Diego (UCSD) have developed a safety feature they say will provide advance warning of the failure of lithium metal batteries by slowing down the flow of energy (and, consequently, heat) that builds up inside the battery when it short circuits.

The research was led by UCSD nanoengineering professor Ping Liu and his Ph.D. student Matthew Gonzalez. “We’re not trying to stop battery failure from happening. We’re making it much safer so that when it does fail, the battery doesn’t catastrophically catch on fire or explode,” Gonzalez explains in a paper published in Advanced Materials.

The team developed a separator that prevents dendrites, needle-like structures that grow on the anode after repeated charging, from piercing through the separator and creating a bridge between the anode and cathode, causing an internal short circuit. The resulting flow of electrons between the two electrodes will get out of control and cause the battery to instantly overheat and stop working.

Gonzalez compared the new battery separator to a spillway at a dam. “One side of the separator is covered by a thin, partially conductive web of carbon nanotubes that intercepts any dendrites that form. When a dendrite punctures the separator and hits this web, electrons now have a pathway through which they can slowly drain out instead of rushing straight towards the cathode all at once …. That’s the idea with our separator. We are draining out the charge much, much slower and preventing a ‘flood’ of electrons to the cathode. When a dendrite gets intercepted by the separator’s conductive layer, the battery can begin to self-discharge so that when the battery does short, there’s not enough energy left to be dangerous.”

The UCSD team deliberately chose to mitigate the effects of the dendrites instead of blocking them. The separators, they explain, still need to have pores that let ions flow through for the battery to work. As a consequence, when the dendrites eventually make it through, the short circuit will be even worse.”

In tests, lithium metal batteries equipped with the new separator gradually began to fail over 20 to 30 cycles as opposed to abruptly failing in a single cycle as would batteries with a normal (and slightly thicker) separator.

Although this study focused on lithium metal batteries, the researchers say the separator can also work also in lithium ion and other battery chemistries. The team is optimizing the separator for commercial use. The UCSD has filed for a provisional patent.

Widely used since the 1940s, the nonbiodegradable synthetic per- and poly-fluoroalkyls (PFAS) have contaminated many water supplies across America. Their resistance to heat, chemicals, and physical force have made virtually ubiquitous in industry and our everyday lives. You can find them in food packaging, stain- and water-repellent fabrics, polishes and waxes, firefighting foams, and carpets and carpet-cleaning products, to name only a sampling of industries.

The Environmental Protection Agency estimates that most of the population has been exposed to PFASs, which have been given the name of “forever chemicals” because they do not biodegrade and accumulate in the body over time.

Engineers at the University of California—Riverside have now shown in modeling experiments that using excess electrons shatters the carbon-fluorine bond of PFAS in water and leaves by-products that might even accelerate the process. The paper is published in Physical Chemistry Chemical Physics.1

Sharma Yamijala, a postdoctoral researcher in the Marlan and Rosemary Bourns College of Engineering, ran simulations on the most common PFAS contaminants in the environment (perfluorooctanoic acid and perfluorooctanesulfonic acid molecules) surrounded by water molecules. He found that they instantly lost their fluorine atom in the presence of excess electrons. The PFA molecules broke down into an intermediate chemical species whose composition could further accelerate the decomposition of other PFA molecules. The reaction also formed a hydrogen fluoride molecule. It has not yet been determined whether these short-chain molecules are carcinogens at typical concentrations in water.

“In a real water-treatment scenario, the excess electrons could come from metal-containing compounds placed in the water under ultraviolet radiation. The electrons from these compounds will interact with the PFA molecules and break them,” Yamijala said.

Scientists have been aware of the possibility of the process described in the simulations. Bryan Wong, an associate professor of chemical and environmental engineering and the paper’s senior author, explains: “People knew you could do this but didn’t know why. Our simulations define the bigger picture that we can refine to find ways to break down PFAS faster or more efficiently in the future.”

The research was supported by grants from the U.S. Department of Energy, Office of Science, Early Career Research Program Award No. DE-SC0016269 and the National Science Foundation Grant No. CHE-1808242.


Mary Jane Dittmar is the senior associate editor of Fire Engineering and conference manager of FDIC International. Before joining the magazine in January 1991, she served as editor of a trade magazine in the health/nutrition market and held various positions in the educational and medical advertising fields. She has a bachelor’s degree in English/journalism and a master’s degree in communication arts.