It is said that firefighters, as a breed, are an incredibly resourceful bunch. And as…a whole, the fire service has taken a page out of the proverbial playbook of the United States Marine Corps: Improvise, Adapt, and Overcome.

The Houston Fire Department (HFD) currently utilizes 4″ Large Diameter Hose (LDH) as its supply line. Engine companies load this hose in a variation on the split hose bed called a Combination Load where 1000′ of a single line or 500′ of dual 4″ lines can be laid. Typically, one single 4″ line is more than ample for the typical structure fire. At times though, dual lines are required, and this is why HFD protocol calls for a hydrant valve to be connected to the side discharge of a hydrant any time a LDH water supply is established. This allows for any uncommitted engine to lay the second 4″ hose without interrupting the flow of water to the attack pumper. 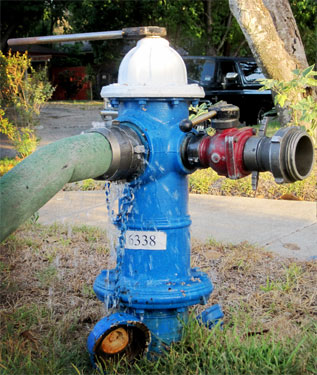 The next-in unit dresses the hydrant:
• Flushing the hydrant
• Attaching the hydrant valve to the side discharge closest to the fire
• Removing any and all Velcro/Milwaukee Strap®
• Charging the line on the engine chauffer’s command
• Addressing any kinks/hose in the middle of the road

The folds incorporate all slack necessary to make a kink-free connection. As well, the webbing initially wrapped around the hydrant by plug firefighter negates any need to foot-the-line as the pumper pulls away.

One caveat to this operation is that the engine chauffeur must ensure the supply line laid does not hinder other units from making their assigned location by laying hose in the middle of the street. If the scenario is changed to a case where only the engine and ladder are part of the initial box alarm, then the engine personnel can catch their own hydrant while the ladder passes the engine proceeding to the building. This greatly reduces the chance that the engine stops right in front of the building creating spotting difficulties for the ladder chauffeur. 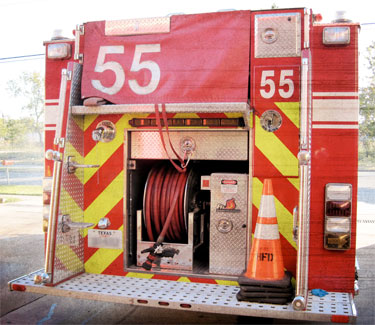 This setup is not for everyone: It has less value in areas where units are in close proximity to each other. Additionally, like any standard operating procedure, there is always an exception(s): An officer on a first arriving unit might skip establishing a water supply entirely if there are reports of trapped victims. Additionally, departments that operate in denser, urban environments will often have hydrants close enough where the chauffeur alone can simply stretch his supply line to the hydrant.