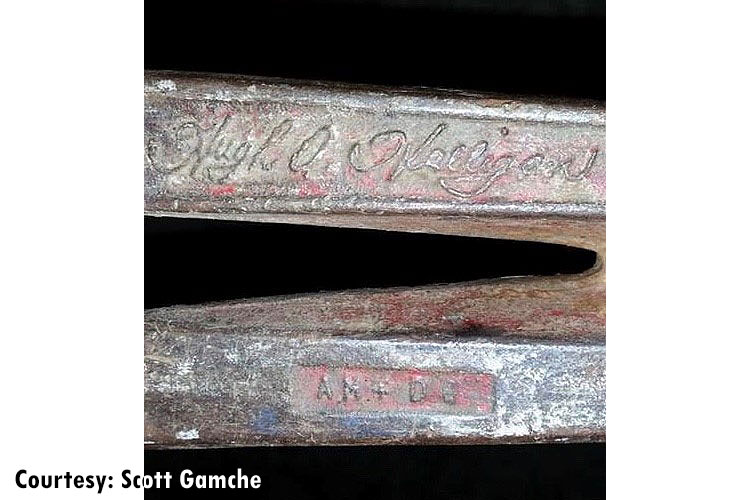 Photos by author except where indicated

The halligan. It is perhaps the most iconic tool when it comes to firefighting. But where did it come from? Why was it developed? Who made it? How have we progressed to our present-day halligans? A lot in the fire service have heard the back story, at least to some degree. If you’re into folklore, you may have heard the rumors about markings on the original halligans. If you’re a tool nerd like me, not only do you care about the history of the tool, but you also care about its quality, functionality, and not only whether the tool works, but how it works and why. This series is broken down into three parts: The history of the halligan from predecessors to the modern Pro-Bar, modern halligan comparisons, and finally the science behind the halligan, and why it works (levers and mechanical advantage.)

The Ins and Out of the Halligan: Part II: There Are Many Halligans But This One Is Mine | Part III: How It Works

In 1916, Hugh Halligan was appointed to the Fire Department of New York (FDNY) and served until 1959. For 43 years, Chief Halligan devoted himself to the fire service, having served in all bureaus of the department and having risen to the rank of deputy chief.  A few years after he joined the fire service, the FDNY adopted its first modern pry bar, the claw tool (photo 1). The claw tool was heavy, hard to use, and hard to strike with because of an off-center striking surface. It had a claw on one end and forks on the other. As the story goes in FDNY history, bank robbers set fire to a bank to cover their tracks. During overhaul, firefighters discovered the claw tool. Intrigued by its design and that it could be used to break into a bank, the firefighters adopted it, with replicas began being produced until it was the adopted forcible entry tool for the FDNY.

Some years went by and things changed, as they always do in the fire service. Captain John Kelly of Ladder 163 produced what was called the Kelly tool (photo 2). The Kelly tool was shorter, around 24 inches, and made of welded steel. The tool was still very heavy. The Kelly tool got rid of the claw and off-centered striking surface, replacing the claw with the adz. This placed the striking point in line with the shaft of the tool. The forks end was also replaced with a chisel end. This tool became a go-to for forcible entry, however, many firemen still preferred the claw tool for some specific advantages it had over the Kelly tool. Often both tools would be carried. We even have a version still floating around at my department called the Callahan tool. Many of our old heads still refer to the halligan as a Callahan.

(3) Hugh Halligan, from the pages of Fire Engineering.

Enter Chief Halligan. Chief Halligan thought he could improve on both these tools. Several years before the invention of the halligan, Chief Halligan was at a cellar fire, where he noticed many apparent disadvantages of the claw tool. He was so convinced of the need for a new tool that he approached the FDNY commissioner at the time, John J. McElligott. Commissioner McElligott ordered Chief Halligan to begin work on something new for the department. Chief Halligan was impressed with a tool that fire patrol was using at the time, which had a straight drive and a “sweeping claw.” The disadvantages of this tool were that it was welded and that it weighed a lot. Chief Halligan wanted something that was lightweight and easily handled but that was still strong and would not break in the heat of battle. The chief spent hours researching and using trial and error to come up with the perfect tool. In 1948, the halligan tool was born (photo 3). Chief Halligan stated that the original tools took 18 hours to make. The original tools had to be heated slowly, which several times led to some of the tools breaking under heavy usage. Chief Halligan refused to cast the tools knowing that they still would be susceptible to breaking when needed most. Chief Halligan decided on a drop-forged tool from one piece of No. 4140 (high carbon content) steel.

The halligan was placed on the market and was an instant success. By 1950, the Boston Fire Department had placed a halligan on every truck company in the city. Folklore has it that the FDNY would not buy the tools from Chief Halligan, as they thought it was a conflict of interest and that no firefighter should be making money off of the department. Chief Halligan patented his design to make sure to protect it. He would sell his bars to individual firefighters or companies but not the city of New York. The halligan caught on, however, and companies across the city purchased the tools.

One of my personal favorite folkloric stories of the halligan involves the stamps on the forks. Later editions of the halligan had AM+DG on one side of the forks (photo 4). Chief Halligan was a very religious man and it is believed to stand for Ad Majorem Dei Gloriam, Latin “for the greater glory of God.” It is said that Chief Halligan would hand make a rosary for each new member coming into the FDNY but that the task became too overwhelming. During my research for this article, I stumbled upon a comments section on hookandirons.com. On their Web site, they had related this same story. A woman named Virginia Rogers, who states that she is Chief Halliga’ns granddaughter, commented that AM+DG does indeed stand for Ad Majorem Dei Gloriam.

(6) Pinned forks of a three-piece halligan.

Around the time the patent ran out, other tool manufactures began to create copies of the halligan. The city of New York purchased these tools and began to issue them to companies across the city. It’s said that ladder companies continued to buy original halligans any time they could find them. As other tool manufactures continued to make copies of Chief Halligan’s design, the quality of the tools deteriorated. Three-piece halligans with pinned ends became very common in the 1970 as they were cheaper to manufacture (Photos 5 and 6). These halligans had their problems, but luckily another FDNY firefighter saw the need for a new tool.

Enter William McLaughlin. Have you heard of the K-Tool? Yeah, McLaughlin invented that too. The K-Tool was invented in 1972 and in 1975, McLaughlin invented the Pro-Bar (photo 7). McLaughlin and his cousin, Bob Farrell, an FDNY captain, wanted a tool with long, slender forks and a slightly longer adz than the original halligan. They also wanted an adz with a slight curve to it, unlike the pinned three-piece halligans that were on the market. They went through trial and error and, luckily for them, Bob was the captain of Ladder 31 in the Bronx. Their designs got plenty of use.

McLaughlin already had a patent on it and already owned a company, because he had been making the K-Tool for the past few years. The original Pro-Bars were made by the K-Tool Company. That is why to this day the forks are stamped with K-Tool Co (photo 8). Now when McLaughlin and Farrell were getting ready to go to market with their new bar, they went to Chief Halligan with the idea of keeping the name “halligan.” Although the patent on the halligan had long been out, names can be trademarked or renewed indefinitely. McLaughlin and Farrell told Chief Halligan how they had improved on his tool and how they want to keep his name. They offered to pay him a permanent royalty and continue to pay his family after he dies, since the family owns the name of the “halligan tool.” Chief Halligan thought all this was great but he had one question: were they going to sell to the FDNY? McLaughlin and Farrell said that they planned to sell to their own department, if the department will have it. That was a deal breaker for Chief Halligan, and he never gave them use of the name.

Captain Farrell was injured on the job and retired. He started the company Fire Hooks Unlimited in 1980. McLaughlin licensed the Pro-Bar and K-Tool to Farrell and Fire Hooks Unlimited, which continues to manufacture both today. The Pro-Bar is THE standard when it comes to halligan design and quality and is the forcible entry tool issued by the FDNY and departments across the country.

Hours were spent searching the internet for material for this article. I’d like to thank Sean Wilson of Royal Oak (MI) Fire Department and owner of Rise Above Fire Training, LLC for his help filling in all the gaps.

Clay Magee is an instructor with Magic City Truck Academy and a Firefighter/Paramedic with Birmingham (AL) Fire and Rescue and Chelsea Fire and Rescue. He is currently assigned to Rescue 20 at Birmingham. Clay began his career with the East Oktibbeha Fire Department in 2004 while attending Mississippi State University. He has been with Birmingham Fire since 2013. He has a passion for forcible entry and high-rise operations. He holds a bachelor’s degree in business administration from Mississippi State University, an associate’s degree in Fire Science from Columbia Southern University, and multiple certifications from the Alabama Fire College.