Many firefighters carry webbing as a go-to tool for any number of tasks, including firefighter and victim rescue. Rapid intervention team (RIT) training curricula often center around using webbing for harnessing down firefighters for removal, but how effective are these techniques in the high-stress, low-visibility, low-dexterity environment for which they are designed? The patented Multi-Loop Rescue Strap (MLRS) from Anderson Rescue Solutions LLC is designed to take the concept of a rapidly deployable webbing harness and modify it to function primarily in the fire and rescue environment.

Sewn out of one continuous piece of one-inch tubular webbing, the MLRS is seven feet long and sewn into 11 individual pockets. Designed to be used in zero visibility while wearing gloves, the MLRS has three physical locators that allow the user to orient himself on the tool. Both end handles are reinforced with an 11-millimeter static rope inserted into the webbing to make handles the user can easily manipulate when deploying the strap and enable him to find the strap even in fire debris should he drop it. The third locator is the midpoint, identified by a sewn-in aluminum rigging ring or a unique spring-loaded captive eye carabiner. This provides a central rigging point as well as a point of orientation during deployment.

The sewn pockets along the body of the MLRS allow for adjustability. If a firefighter deploys the MLRS around a small civilian victim vs. a firefighter in full gear, connecting to a loop closer to the body reduces the strap’s tail and gives the user greater control over the victim.

The deployment concept of the MLRS is centered on simplicity. It is explicitly not designed for comfort or as a class III harness. Rather, it is intended to be simple to deploy for high-stress rescues with the primary goal of victim survivability. To secure a victim, the user passes the MLRS around his chest and passes one end handle through the other, pulling it tight. Now girth-hitched, the user can drag, lift, or lower the victim from any number of scenarios. If the victim is in a confined space, the user can easily form end loops into wristlets to make a vertical lift. The midpoint is easily found through the rigging ring or the carabiner, enabling rigging in environments with zero visibility. 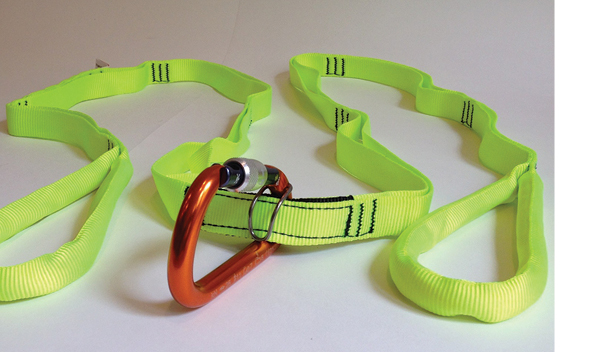 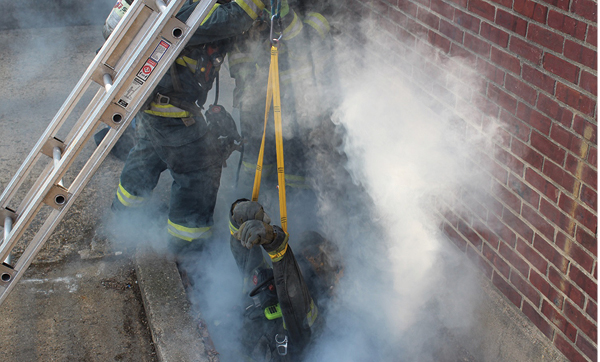 There are numerous options for horizontal movement by a civilian or a firefighter wearing a self-contained breathing apparatus (SCBA). Civilians can be girth-hitched as described above, or the user can simply run the MLRS around his back and under his armpits to make a rapid drag. When converting an SCBA into a harness, adding a MLRS can add substantial mechanical advantage when dragging. Simply pass the strap through the shoulder straps while girth-hitched or connect it with a carabiner to provide the rescuer with numerous options to increase the RIT’s ability to drag a firefighter horizontally. In addition to these simple deployment methods are techniques for rigging a seat harness or carrying a victim up stairs.

In addition to the MLRS, Anderson Rescue Solutions also designed a unique Rapid Deployment Bag to carry the tool and place it in service instantly. You can mount it horizontally or vertically on an SCBA strap, truck belt, or RIT pack; it closes magnetically and allows one end loop to remain exposed. When the MLRS is needed, simply pull the exposed loop, and the tool is now in service. Also available is a tactical version of the Rapid Deployment Bag compatible with modular lightweight load-carrying equipment (MOLLE), allowing the user to mount it to a ballistic plate carrier and other MOLLE-compatible bags and packs.

At an active shooter incident, the MLRS is an ideal accessory to ensure your team’s safety. The MLRS is a vital tool because of its size and simplicity. Designed to be carried in every firefighter’s pocket, it allows rescuers to begin operations on a civilian or a fellow firefighter immediately, greatly increasing the chances of victim survival.

Many studies on RIT operations indicate that most Mayday rescues are accomplished by the firefighters in the immediate vicinity of the Mayday event and not by the RIT standing by. The MLRS increases the odds in the victim’s favor when it is needed in the worst possible conditions.

The MLRS has been used in numerous rescues, including civilian rescues in fires, extrications from vehicles and mass transit, technical rescues, and the removal of an unconscious firefighter following a Mayday, proving its effectiveness in the most extreme circumstances.

TIM ANDERSON is the owner of Anderson Rescue Solutions LLC and the inventor of the Multi-Loop Rescue Strap. He is also a member of the Philadelphia (PA) Fire Department, assigned to Squad Co. 72. Anderson is also a tech rescue instructor and a rescue specialist on PATF1.