Since grade school, we have been trained and have calibrated our eyes to be able to divide a space into tenths and extrapolate between two known divisions or tic marks on a gauge or graph. Similarly, plotting X and Y coordinates is something many will recall. Given a supply pressure hallway between 50 and 60 pounds-per-square-inch (psi)—with 10 psi increments—we all would report 55 psi. If it was slightly off center, we would report 56 psi. If it was close to 60, but not quite, we may report 58 psi. This same process is used to determine the United States National Grid (USNG) coordinates on a map.

The USNG is the national standard coordinate system of the United States that is designed for ground-based operations. This fits into what the fire service does routinely. It can be used daily in dispatch information to identify locations of interest that are unique, combined with or in place of a street address. It also can be used by fire inspectors and preplan teams to mark hazards; utility shutoffs; fire risers; hydrants; and, with an easy-to-use set of characters devoid of degrees, minutes, decimals, or seconds. USNG is also mandated for use in multiple states during disasters when the paradigm of street address referencing is blown way, burned over, flooded, and so on. USNG may seem new, but it has origins to Military Grid Reference System (MGRS), circa 1949, and is known to U.S. military veterans simply as “grid.”

USNG has four components: the Grid Zone Designator (GZD), the 100-Kilometer (km) ID, the Easting, and the Northing. For local operations in your first-due area, in many cases, only the easting and northing is needed. For jurisdictions that contain grid boundaries, the 100 km ID and the GZD may be needed. For best use, USNG grid lines must be on your paper or electronic map such as a mobile data terminal and computer-aided dispatch displays. Also, USNG may be observed with free web tools and multiple smart phone applications. You can be a USNG user inside of 90 seconds.

USNG has the following general rule: “Read right, then up.” Thus, when reading a map, one always first moves to the easting, and then up to the northing. A typical USNG coordinate from Indianapolis, Indiana would read: “16S EK 7126 0204.” This means, into words, that GZD is “16S,” 100 km ID is “EK,” within one km grid square (71 02), the location of interest is 26 percent right and four percent up. The principle digits are always the leading two digits in the easting, and the northing and makes up the one km grid square. This location of interest is a center field light pole at Victory Field in Indianapolis.

USNG users have the ability to adjust precision. A one km square is four digits, such as “71 02.” A 100-meter square is six digits, i.e., 712 020. Finally, the 10-meter square is eight digits, i.e., 7126 0204. Note that many Web tools, such as global positioning system (GPS) receivers and smart phone apps will display 10 digits. Ten digits are not recommended for use because they represent one meter square; GPS receivers, and even maps, are not typically accurate to that level of precision. It is recommended that the highest precision for fire-rescue be eight digits. One advantage of this is that even pairs of digits are easier to remember, transmit, and copy over the radio.

USNG coordinates are never rounded up or down. Rather, they are truncated from right to left. Rounding results in error because the plotted location will be in an adjacent grid square.

Figure 1 shows a typical Internet map view, which is nothing more than a picture. It is what we are all used to seeing; but how usable is it? How does one easily obtain a coordinate for the LZ (helispot) from such display? Add a grid. Having A-Z, 1-9 in the margin is a “bingo” grid. This is not interoperable, nor would it be found in GPS receivers or smart phone applications. 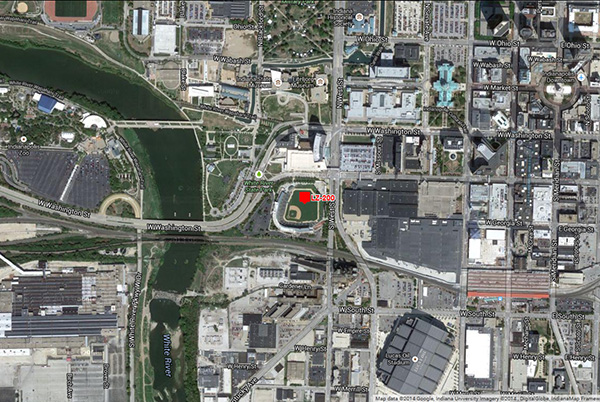 Figure 2 shows the interoperable USNG with one km grid lines. Combining the pump panel gauge analogy and the USNG general rule, observe that the LZ icon is 2/10s right from grid line 71 and 0/10s up from grid line 02. 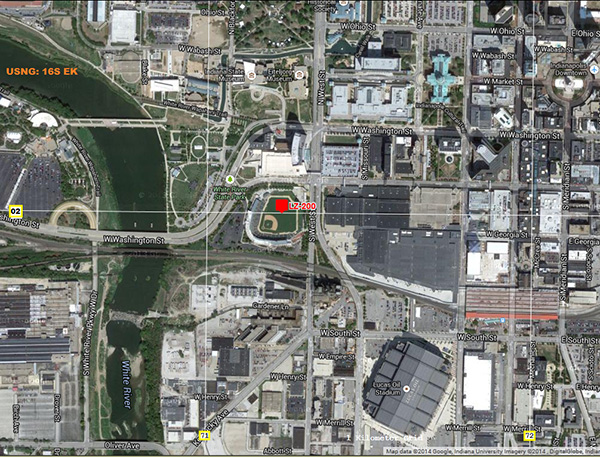 In Figure 3, we zoom in to see 100-meter grid lines. The LZ, in left field of the ballpark, is fully within grid square 712 020. Military and medical helicopter pilots interviewed indicate that 100-meter coordinates are the desired precision they need. Consider that for a moment; the word count over the radio could be as few as just six characters when using USNG. If the 100 km ID was needed to make the coordinate more regional, add just two more characters. Worldwide, a helispot can be identified in just 11 characters: 16S EK 712 020. 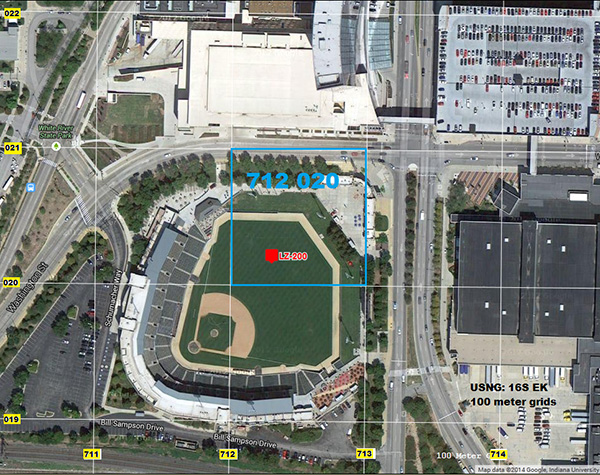 Figure 4 is a view of that grid square from the smart phone app MilGPS. 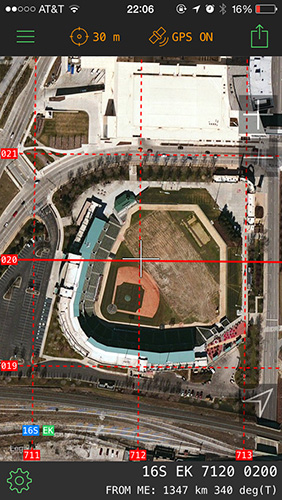 Given 100-meter grid lines, increasing precision by adding just one more digit identifies valves, hydrants, hazards and, utilities in preplans, reports, and other documentation or the center field light pole as discussed previously. In each case, from one km to 10 meters, read the tenth between the known divisions, just like the pump panel gauge.

USNG map-making tools exist in standard geographic information systems (GIS) software. Engage your GIS personnel or whoever makes your response maps to add USNG grid lines to the next revision. In the interim, USNG may be made operational rather easily. GPS receivers—hand-held and vehicle type—must be set to USNG or Military Grid Reference System (MGRS). If a smart phone is your electronic tool, search the app store for “MGRS” where free and low-cost options exist. On your desk computer, tablet, or your department’s dispatch console, add a Web tool such as Mission Manager. Such web tools can convert street addresses to USNG or any coordinate system in seconds or display a USNG coordinate radioed in succinctly from an incident.

If you were to read one document to corroborate the benefits of USNG, read Implementation Guide to the U.S. National Grid, issued in September 2013, by the National Alliance for Public Safety GIS.

Per the National Fire Incident Reporting System, 33 percent of requests for service are not a street address. When a street address does not fit, the easiest solution the fire service has available to them is the national standard USNG.

Al Studt, CFPS, is a 31-year fire service veteran and a lieutenant with Canaveral Fire Rescue in Brevard County, Florida. He is also a communications and structures specialist for Orlando, Florida’s, Task Force 4 Urban Search and Rescue team. Studt has been deployed to areas devastated by Hurricane Andrew and Katrina and has operated in suburban terrain that was devoid of its primary geospatial reference system. Since 2007, Studt has been an advocate and instructor of the U.S. National Grid, teaching emergency services and authoring numerous articles. He resides in Cocoa, Florida. Contact Studt at USNG08@gmail.com.

Apartment Building Explosion in Sweden Injures Up to 20

Apartment Building Explosion in Sweden Injures Up to 20