More
Home Apparatus & Equipment UAVs in Public Safety: The Next Steps in Technology 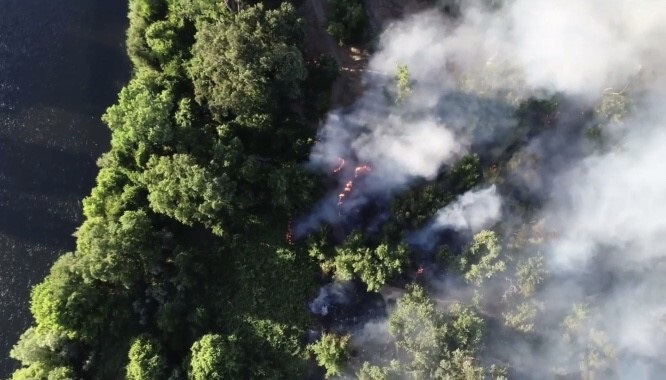 More and more public safety agencies are building unmanned aerial vehicle (UAV) programs, developing their operational models, and buying equipment. More and varied uses are developing constantly, and cooperation is growing among all levels of government, from the Federal Aviation Administration (FAA) down to local jurisdictions.

As with any new rapidly adopted technology, the current hardware offerings are often seen as “the” answer; but sometimes they’re just the “only” answer for right now, as is in the public safety UAV programs. Until now, only one hardware manufacturer has dominated the market and made significant contributions toward public safety UAV use. Competition is healthy, however, and hopefully changes to FAA restrictions and the public’s widening acceptance of the public safety use of UAVs will push further development by other hardware and software providers.

The Expanding World of Unmanned Aerial Vehicles in the Fire Service

Now that UAVs are standard pieces of equipment for many public safety agencies, UAV program personnel are wondering, what’s next? Better sensors? Smaller hardware? Streaming video? Something totally different? Yes! Many exciting technologies are on the horizon, and many are geared specifically toward public safety.

Several companies are working on next-generation obstacle avoidance. Although many current hardware platforms offer some level of obstacle avoidance, they are far from perfect and often restrict the aircraft’s movement in situations where there is plenty of safe airspace to move around the obstacle. One standout offers real-time 3-D modeling for the aircraft to better understand its environment and allow the pilot to move through it. Although the current rendition of this aircraft has other limitations, it’s exciting to see this real-time processing being leveraged so inventively.

Since most agencies use their UAVs to gain situational awareness on scene, the ability to create orthorectified, high-resolution maps has been desired for some time. Programs exist that create amazing 2-D- and 3-D-rendered maps, but many of these are geared toward industry, not public safety. As such, they either require high-end laptops to process the imaging or require you to send images to the cloud to be processed remotely, which often takes 10 hours or more. Faster options were available but offered much lower resolution and were still not terribly convenient.

However, one program has been built from the ground up to work on standard lower-end public safety laptops with the average public safety UAV and is amazingly fast. We can now process on-scene 2-D maps in near-real time using lightweight technology and share those orthorectified images with other incoming units. Other programs are also pushing the edge with their real-time mapping. As this becomes more and more prevalent, adding high-resolution maps to existing software or even as layers above whatever mapping system your agency uses becomes a real possibility at a minimal cost.

Among the most powerful parts of a public safety UAV are the sensors it deploys. High-resolution visual cameras with zoom function, thermal imaging cameras with enhancements, and low-light sensors are the standard that public safety agencies depend on. Looking beyond that, several companies have released small-format sensors that will be groundbreaking once they enter the public safety UAV market in force. Enhanced thermal imaging and range finding will certainly see quick adoption, but technologies from other industries using UAVs will also become “must have” tools. Laser imaging, detection, and ranging (LIDAR) uses light pulses to precisely measure distances (it is used in self-driving cars) and could become a tool for modeling buildings and to create maps for augmented reality (AR). Multi-spectral near- and mid-infrared scanners (currently used heavily in the agriculture UAVs) should be implemented in the wildland arena to preplan growth patterns, check for vegetative health, and gather information that could then be forwarded to predictive modeling software to look at historical fuel growth/moisture levels and the resultant fires that occurred (photo 1). UAVs are deploying handheld chemical sensors and radiological sensors using aftermarket brackets, and one manufacturer has even released a UAV-specific gas sensor. The next generation of chemical and radiological sensors could be further miniaturized and integrated such that they are simply part of every standard hazmat deployment, big or small (photo 2). 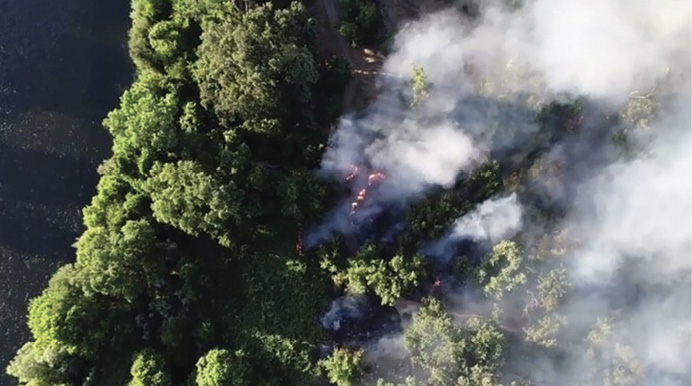 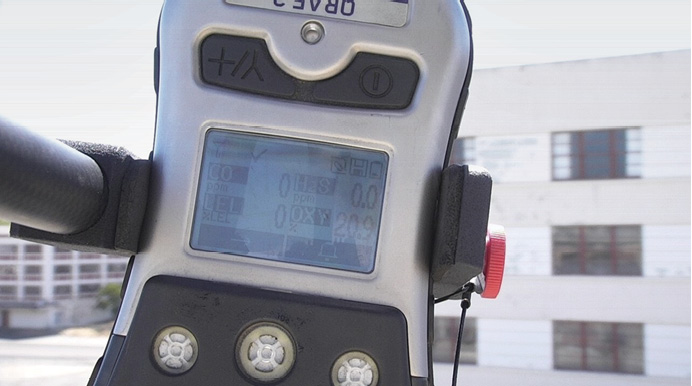 AR is among the most exciting, progressive technologies for public safety UAV. Several companies are working on impressive AR platforms. Two have programs that allow superimposed layers on top of the UAV’s camera layer to deliver street names, address numbers, and pretty much anything else you want to enter in a geographic information system layer. In the near future, this will allow the display of a multitude of information to the UAV pilot, which will greatly aid incident commanders (ICs) in decision making. The possibilities are endless and can be custom tailored for the agency. Possibly, this would include some of the amazing personnel tracking “beacons” coming into the fire service. Whether it’s tracking vehicles or individual crew members, this will be a reality for future ICs.

Although this technology is already being used in multiple forms, this is really why public safety UAVs have been so rapidly adopted. Three providers already offer solid software-only video streaming options, and one product allows hardware solutions. Each has advantages and limitations, and a thorough examination of your local UAV program should help determine which is the best fit for you. What’s exciting is that with multi-endpoint video, every person or vehicle operating on scene (and even those not on scene) can be allowed access to streams of information being gathered. Video from UAVs and from ground-vehicle, personnel, and public-domain cameras (e.g., red light cameras, public area cameras, etc.) could be quickly integrated into the overall situational awareness picture. The “future” “glass cockpit” incident command post is available now and could be implemented soon.

Indoor flight is a fast-growing use for UAVs in public safety. For law enforcement agencies, micro UAVs flown with AR goggles help clear rooms and provide detailed information of the building’s interior before officers make entry. Seen as an apex model for increasing officer safety before building entry, flying micro UAVs is usually much more difficult, requiring significant training because of the lack of stabilizing functions on aircraft that small. True acrobatic flying is much harder to master than flying a UAV with multiple flight stabilizing features. Additionally, flying immersed in AR goggles is a new and often disorienting experience. New to many in public safety, these very small, fast-moving, and agile micro-craft, adapted from drone racing, provide the pilot with imagery often viewed through immersive goggles. Advances in the digital goggle technology are making this option more of a reality (photo 3). 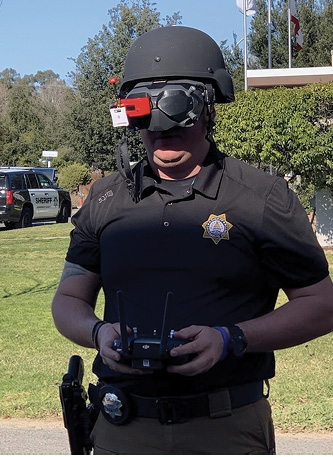 First introduced to the public by Intel, a swarm of dozens or hundreds of micro UAVs could be deployed rapidly to gather data over a large area in a very small amount of time. Using artificial intelligence, machine learning, and machine-to-machine communications, these swarms could travel like organic insect clouds, passing information among each other to better accomplish their mission. Especially intriguing is deployment in major disaster areas, where a swarm of micro UAVs could provide enormous amounts of data quickly.

Unmanned traffic management (UTM) and remote identification are two major topics for the National Aeronautics and Space Administration (NASA) and the FAA. Analogous to air traffic control for manned aircraft, automated UTM is being adopted for UAVs and eventually will be able to monitor the position of all aircraft in the sky. By reserving sections of sky for an upcoming mission, NASA’s STEReO project seeks to limit potential UAV-on-UAV incursions as the commercial sector grows in the next several years. The project is still in the early stage but shows great ingenuity and has sought to include public safety representatives in the discussion. Although the program still has to overcome obstacles, someday, UAV traffic will be monitored the same way that manned aircraft are monitored.

What Does NFPA’s Drone Standard Mean for Your Fire Department?

Remote identification would identify each UAV with a virtual “license plate,” which could be made available in the UTM just as manned aviation’s N-numbers are currently. In the current forms, however, UTM and remote ID are generally incompatible with public safety UAV operations. They limit immediate access to otherwise open airspace and require a strong, uninterrupted cellular connection, neither of which are a guarantee on any public safety mission. However, as the dialog continues and strong voices from the fire service and law enforcement present their cases, allowances and adaptations will certainly advance.

The ever-increasing cooperative public safety UAV groups forming across the country are the first step toward real standardization. Although limited generalized standardization from the FAA or in the National Institute of Standards and Technology Precision Flight props has its place, specific regional needs often drive public safety UAV operations. Whether it’s the availability of resources, geography, politics, demographics, or something else, public safety agencies’ call response and mitigation vary from region to region. Getting the job done safely, efficiently, and effectively is the hallmark of the modern fire service.

But, what’s efficient and effective in one region may not be in another. As public safety pilots and UAV programs seek to standardize their UAV operations in our industry, remember, each agency’s needs and scopes differ. DRONERESPONDERS and other groups are developing national level standards that include all regions. Dialog and meet with neighboring law and fire agencies to discuss UAV use and needs in your area.

Many agencies I speak to are unaware of others in their area starting unmanned flight programs, although every region in the country is seeing growth. Out of 10 neighboring agencies, at least six will have or be working on UAV programs. Regional operating groups are the most effective way to grow UAV programs and to gain administrative and public acceptance, assist with policy formation and training models, and provide mutual aid in the future.

The future of small unmanned aircraft in public safety and other applications will continue to advance. Fortunately, there’s widespread support at most levels of government for the safe use of UAVs in public safety. As we continue to move forward, it’s essential that we critique and shape new technologies into what we need to complete the mission; don’t just accept off-the-shelf technology.

Manufacturers and vendors see the potential for public safety UAV growth and want to be a part of it, but we have to guide them in the right direction with their offerings. So, the next time you talk to someone trying to sell you something for your UAV program, have a dialog about what you want, not just what they can provide.

Attend a UAV conference in your area. Learning and making your voice heard are the best ways to make your needs into a reality. Vendors listen! Technology is moving forward so quickly that what’s “impossible” now will be “standard” tomorrow. For those of us with a couple of years on the job, who would have thought we’d be deploying UAVs from fire engines to gather and stream visual and thermal data to the IC? Or aerially delivering personal flotation devices to stranded swimmers in the river? Or provide near-real-time orthorectified mapping of a scene? The future is amazing!

RYAN GIFFORD is a captain/paramedic for the Sacramento (CA) Metropolitan Fire District (Metro Fire). He is also Metro Fire’s unmanned aerial vehicle program manager, a district computer-aided dispatch coordinator, and an operation safety officer for the C-Shift. Gifford is also a medical team manager for the FEMA urban search and rescue team from Sacramento, CA-TF7.