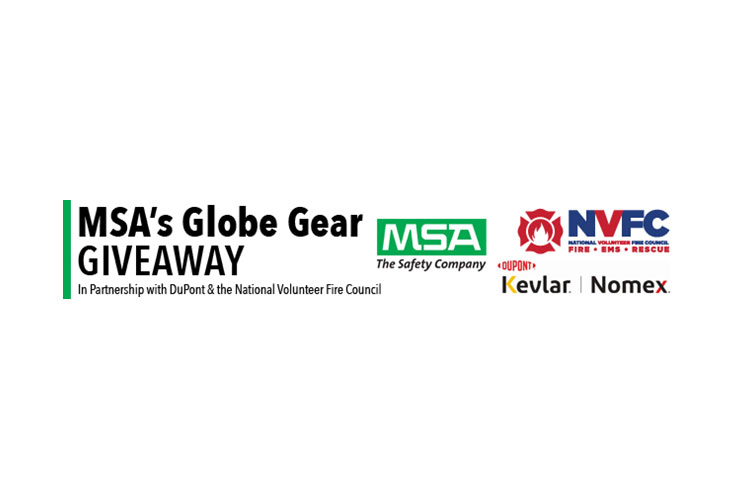 MSA, DuPont, and the National Volunteer Fire Council (NVFC) are helping volunteer fire departments obtain much-needed gear through MSA’s and DuPont’s Globe Gear Giveaway. Now in its tenth year, the program has provided over $1 million worth of gear to assist volunteer fire departments in need. In 2021, 13 departments will each receive four sets of turnout gear and four helmets to help enhance the safety of their firefighters. The first 500 applicants also received a one-year NVFC membership, courtesy of MSA.

The Geneva Volunteer Fire Department (GVFD) is an all-volunteer department located in rural southern Alabama near the border with Florida. GVFD’s 22 members protect a population of 26,270 over 100 square miles, responding to an average of 120 calls annually.

Of the 30 sets of turnout gear GVFD has, only five are less than 10 years old, meaning the rest are out of NFPA compliance. The department relies on a tobacco tax to purchase new gear, yet this source of income has dwindled year after year due to declining smoking rates. The local government is unwilling to raise taxes to provide GVFD with an alternative source of funding, and donations and fundraisers alone are not enough to cover both day-to-day operations and new gear.

“Due to the costs involved, large ticket items such as turnout gear are unfortunately beyond our financial reach,” said fire chief Ben Latimer, noting that the donation was their only hope for obtaining the much-needed gear. “Thank you for your support of our volunteer firefighters who proudly protect the residents of Geneva, AL.”

Located in rural central Indiana, the Hope Volunteer Fire Department (HVFD) is an all-volunteer department made up of 30 members. Serving a population of approximately 3,600 over 26 square miles, HVFD responds to an average of 425 calls annually. The department is committed to working with the town to ensure everyone has a safe living environment and is doing what it can to keep its firefighters safe.

HVFD only has eight sets of turnout gear that are in compliance with NFPA 1851, and many of these are nearing their expiration date as well. The department is striving to replace the outdated gear to make every member NFPA compliant for the next 10 years. However, they recently had to build a new fire station to replace a century-old building as well as purchase a piece of fire apparatus to replace one deemed unrepairable. With the payments on these items along with operating expenses, there is little left for other big purchases such as the new gear they need.

The donation of four sets of Globe turnout gear and four helmets will go a long way in helping HVFD reach its goal to make sure all firefighters have sufficient protection to do their job safely. “HVFD will place the new turnout gear into use immediately upon the completion of a compliant training program,” said assistant fire chief Christopher Allen.

Additional awards will be made monthly throughout 2021. Stay tuned to the NVFC web site, Dispatch newsletter, and Facebook and Twitter pages, as well as the Globe Facebook page, for additional information and announcements.

A Complete Line of Fire Apparatus