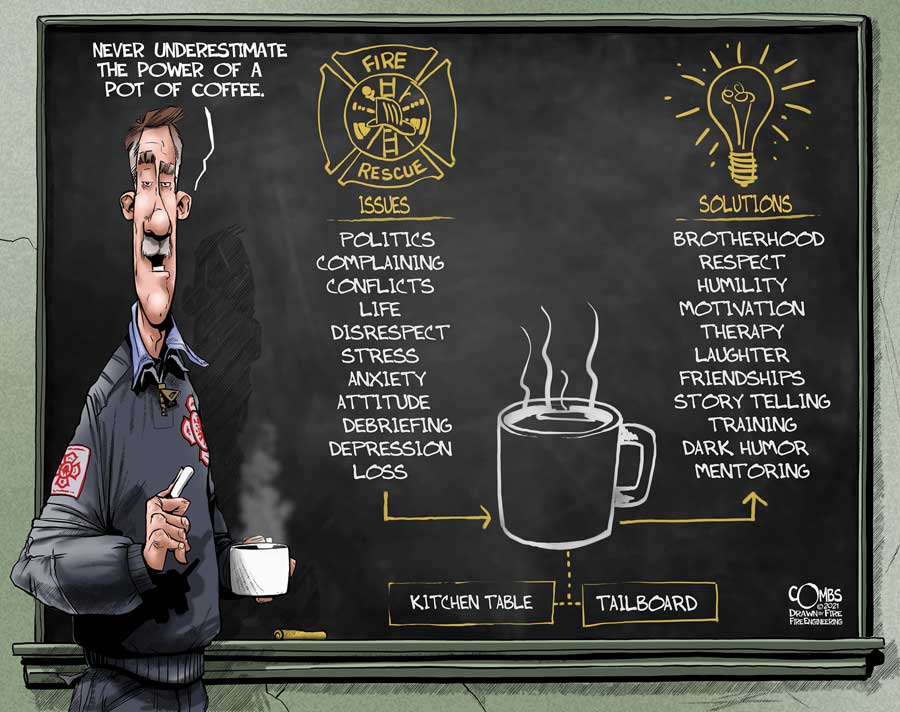 Ah, the firehouse kitchen—where all the world’s problems can be solved over a cup of coffee. It’s a special place where our “family” eats together, sometimes late in the evening after the food is cold. A place where complaints and conflicts were heard and the senior men “hold court.” A place where life lessons, financial guidance, marital advice, DIY instructions, and opinions (whether you want them or not) are given freely. But most importantly, it is a place where we learn our craft. Impromptu discussions have a way of turning into a two-hour drill, even at midnight. I miss that feeling of hearing over the loudspeaker, “drill in the kitchen.” When the officer or the senior man instructed the johnny to “drop a pot” (the term for making a fresh pot of coffee), you knew you were in for a good one.

I was extremely fortunate to work with some of the greatest men I know, who happened to be firefighters. Men who worked during a still-busy time in New York City were going to fires was not a question of when but how many. During my first night tour (6 p.m. to 9 a.m.) in Squad 41 in the South Bronx, we went to six fires and operated at four of them. I say that not to brag, but to express to you the caliber and experience of the firemen I had the chance to learn from. What was passed down from them are things that can never be learned in a manual. The value of just listening to these firemen talk about the job they went to last night has no price tag. Seventy-five percent of what I know was learned at the kitchen table, over a cup of coffee.

In a time before social media, your reputation came from your peers, not by how many likes you got on your Facebook page. To have someone you worked with say that you are a good fireman was the ultimate compliment, and accolades like that don’t come easy. A good friend once told me that in a 30-year career you spend the first decade making your reputation, the second decade proving your reputation, and your third decade living off your reputation. The people I learned from were not satisfied living off their reputations. They held everyone accountable on the fireground, from the probie to the chief. No one was immune to constructive criticism. Most importantly, the people they held most accountable were themselves. The look that you got from them when you messed up on the fire floor said it all. When we got back to quarters, there would be a discussion, at the kitchen, over a cup of coffee.

In August of 2006, we went to a fire in a 99-cents store, a one-story commercial “taxpayer.” While on the roof, I finished cutting a ventilation hole, and as I stepped away from the cut, my boot sunk into the tar. My mind immediately went back to a drill that Bobby was having one night about roof operations. I felt something was not right, but not quite sure what it was. Something that I learned, at the kitchen table, over a cup of coffee, made we want to pass on this information. As I turned around, my lieutenant was looking at something through his TIC. Before I could inform him, he ordered everyone off the roof. Minutes later, the section of the roof that we were operating on collapsed into the fire building. Mickey saved a dozen firefighters lives that day. Unfortunately, that fire would ultimately take the lives of two other firefighters who fell into the basement. Later I asked him what made him order us off the roof. Something he saw didn’t look right. I always wondered if what he saw, what made him make that decision that day, he learned at the kitchen table, over a cup of coffee.

Steve Gillespie is currently a captain in the Charleston (SC) region, and has more than 38 years of experience in volunteer and career departments. After 21 years serving in the FDNY, Steve retired as a lieutenant from Engine 43, having spent his entire career in the Bronx. During those 21 years, Steve spent 13 years as a firefighter assigned to Squad 41 in the Special Operations Command. As well as lecturing and instructing nationally at FDIC International and other fire industry events, Steve is a peer counselor who openly shares his struggles with PTSD in hopes of helping other first responders.