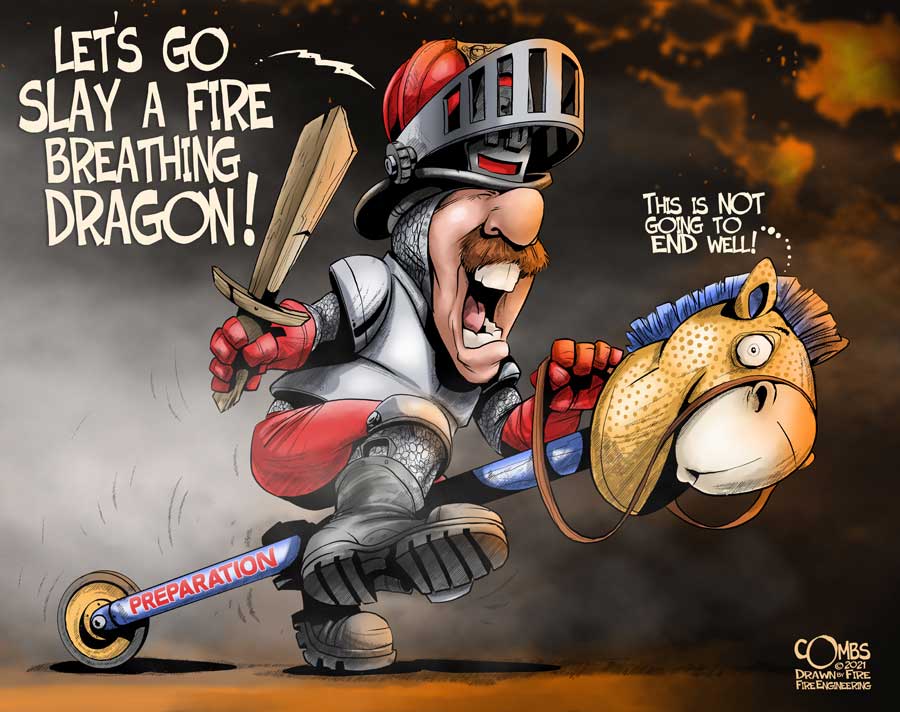 The moment someone calls 911, they need our help at that very second. Unfortunately even the largest metropolitan fire departments or departments with the highest ISO ratings aren’t able to place a firehouse on every corner. Due to this circumstance, firefighters are already behind the ball when it comes to dealing with life-threatening emergencies and fires.

There are many routines we do in the fire service that have become second nature, many of which we have done for years without ever thinking about the reasons behind them. As I reflect back on previous experiences, I realize when something wasn’t set up the way I expected it to be it affected my mental performance on the fireground. It is human nature that when the simplest things go wrong they induce stress on us. As that stress builds, it has a mental effect on the way we conduct ourselves on the fireground. How we prepare ourselves and our apparatus before the tones go off can shave seconds off our response and make us more successful at an emergency. Let’s look at some steps we can take to make us more effective during a response and upon arrival on the fire scene.

Having equipment set up in operational mode is a prime example of how being efficient can lead to being more effective. Have the halyard set in a continuous loop on all extension ladders so it doesn’t need to be untied and is ready for deployment to a window or roof as soon as it is in position. Paint or mark the balance point of portable/ground ladders so the firefighter doesn’t need to count the rungs to determine the balance point. Tools such as an ax, halligan, maul/sedge should be preset at the tip of an aerial ladder or stored in the TL bucket allowing members to grab when they reach the operational point. Have hydraulic lines preconnected to a power unit and color code the dump valves with tape to match the hoses to avoid any confusion. Have the fuel in the “on” position, the knob in the “run” position, and the choke pulled, so that all it takes to start the power unit is pulling the cord. Label airbags with tonnage and lifting height and label bottle jacks in the same fashion. Have the choke pulled out, trigger locked, and the decompression button set on the rotary saws so all it takes to start is pulling the cord.

Hoses should be racked to be easily deployed with different nozzles. If using a dead load, take advantage of folding the two lead lengths in a horseshoe or other bundle that works for your department. Research different types of preconnect loads and train on them to figure out what works best for the buildings in your response area. VSVG or adjustable nozzles need to be in the fight fire position and not in the flush position. Have all of the equipment you may need for a standpipe operation in one bag. While many are sold commercially, make up one that fits the needs of the high-rise buildings you respond to. The same goes for a hydrant bag and equipment needed to supply the FDC/Siamese or setting up a foam operation. When we have all the equipment we could potentially need in one compartment, it saves time and energy.

Always be ready to go at any moment. If you’re a volunteer, back your car in the driveway and have your clothes laid out by the bed next to your keys. If you’re career, be ready to ride from the moment you walk into the firehouse. Stage your fire gear on the rig/hook in the same fashion every shift so as to not waste time getting ready. Don’t be the reason the driver has to make up time on the road because you were last on the apparatus. Pay attention to the radio as other calls in the area may affect the response order of the apparatus. During a response critical information is often relayed by dispatchers or is updated on computers. Not fumbling for equipment allows this information to be processed and shared with the crew. During a response is the time to implement breathing exercises that have been practiced over time allowing you to slow down your heart rate. The same for visualization techniques which will allow you to mentally prepare for actions upon arrival.

When a call comes in, dress like you’re going to war. What does that mean? Hood on, gloves on, light and radio on your person, and SCBA on your back with straps tightened and ready to be pulled from the bracket. Chalks carried on the outside of gear would be another example of how to shave seconds. It is much easier to grab them off of a light or an outside loop than going through a pocket. Have any tools that are mounted in the cab in hand as the air break is set. Know where tools are on the apparatus and what tools you are responsible for according to your riding position. Keep in mind that nothing looks more foolish or wastes more time than running around the rig looking for a piece of equipment. This is something the public will notice.

Be proficient at performing all fireground operations with gloves on. This is something that can be accomplished via reps during training. The argument of getting off the rig masked up vs. masking up at the door will forever be a heated debate with pros and cons to both. I would much rather be able to take in the whole picture and not have to worry about issues such as fogging up. That being said, when I get to the front door or area where I plan to mask up, I do so with gloves ON. This, like any other skill is one that you master over time but can be easily accomplished through repetition. I have found having three straps preset and putting electrical tape on the last one has helped tremendously.

Take the time to set your stretch up for success. Laying the line out properly might take a few extra seconds but will save valuable time when making the push. Having a full length at the door ready to go, preloading a room, or stretching up a staircase are all examples of this. Do standard operating procedures or guidelines dictate you secure a hydrant every time? This decision is usually based on second-due company proximity, availability of hydrants in the area, and arrival conditions, but rarely takes into account a life hazard. The 30-60 seconds it will take to stop and wrap a hydrant could be the difference between life and death.

These are just a few examples that can be done at little to no cost to a department or individual other than the investment of time and desire to make yourself more effective on the fireground. The return on that is immeasurable, especially when it comes to saving a life.

Drawn by Fire: Me First

Commentary: A Year in Review