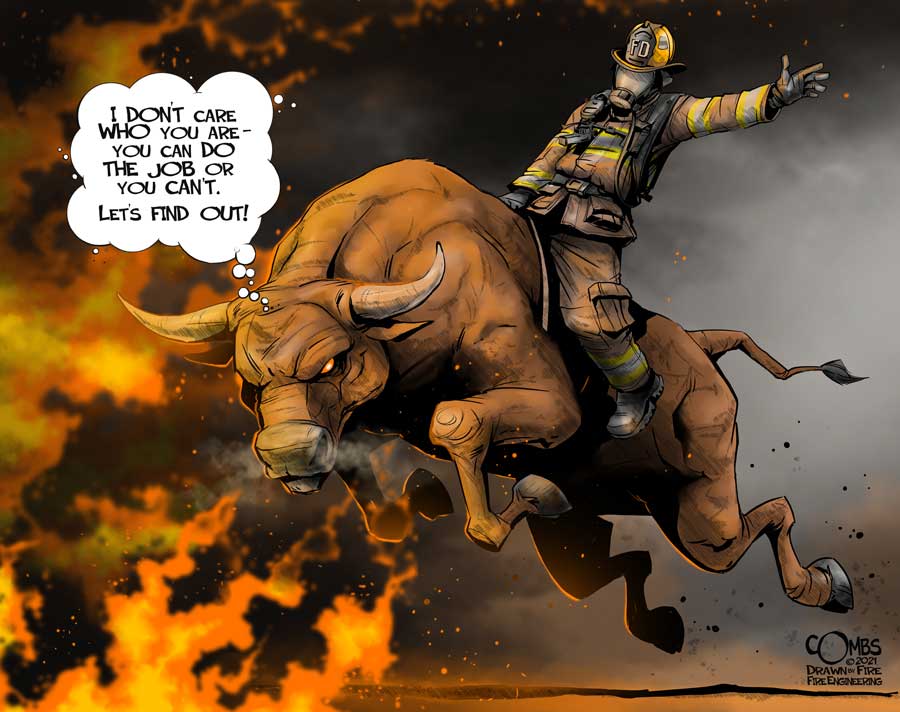 I live in Florida, where you must pay your way through the fire academy before you can start applying to fire departments. You also need to pass a PAT/CPAT along the way. The pre-hiring process will sometimes filter out those that cannot do the job or have background issues. I’ve personally seen the process for women go both ways, where some women have diligently worked hard to achieve success and others have skated by. I truly believe that there should never be leniency on a physical test for ANY gender, specifically a woman, who already are working to eliminate stigmas. Physical tests were made to ensure every prospective firefighter is physically ready to do the job. If the test can’t be passed, then it’s time to better prepare to do the job. Obviously, there are some instances where physical limitations like height or weight get the best of someone, even if they have a heart of a lion. For those, you have my greatest sympathy, because I have seen some fail who deserve it far more than those who pass with ease.

When it comes to being on the job, some say there shouldn’t be differences between a man and a woman: you can either do the job or you can’t. I’ve also been told that women don’t belong in the fire service. Let’s dive a little deeper. I think there’s an abundance of differences between men and women, however I do agree with the statement that you can either do the job, or you can’t. Women and men generally have different body types, where men usually have more upper body strength and women generally have more lower body strength. This means two things: First, women firefighters generally must be better at perfecting their technique and secondly, they may have to attack problems differently. As a woman in the fire service, you may need more reps to perfect the skill. Furthermore, I suggest attending as many training conferences as possible to arm yourself with as much knowledge, tips, tricks, and new techniques. In my experiences, I’ve found that once I commit to learning how to perfect the skill and master a technique that fits my body, I easily was able to perform the skills that are needed to be a good firefighter. For me, I’m a solid 5’4” and a half and I don’t throw a ladder the same way that a six-foot man does. However, others have invested in me and taught me how to adapt to my body style all while achieving the same outcome. As long as you can get the task done in a timely, proficient, and effective manner, it doesn’t matter if you do it the same way as someone else.

I’ve spent my entire fire service career going to as many conferences as I can. Attending conferences has driven me to be better. Learning from those who have come before you, who are from all different regions, is an irreplaceable experience. It has made a huge impact on my career and has increased my confidence in all aspects of the job. One thing I’ve noticed when operating in front of a crowd, generally all eyes are on the woman performing the skill. I know what they’re thinking: “Can she do it?” You can tell me that’s not true, but I’m thinking it, too. It’s not because I don’t believe in my fellow woman firefighter, it’s because there are two types of women, the ones you want to work with, and those you don’t. Here’s a reality in the fire service: every gender and every race feature a firefighter we may not want to work with. It’s not because they are not liked, but it’s usually because their dedication to the job is just not up to par. Most firefighters skate by and or become complacent in their preparation and training. I don’t think women are the problem, I just believe we are noticed more than men. I mean let’s be honest, if there’s 20 guys and one gal, don’t you think everyone is going to notice what she’s doing, how she works, what she’s good at? It’s natural.

If the perception is most women can’t do the job, I have a message to my fellow women firefighters—it’s time to rise to the occasion! Train harder and be better! Does it suck that you get noticed more and people expect more out of you? Sure, but use that to fuel yourself. Be the woman that everyone says: “I want her working with me; she can do the job.” It is a constant struggle. I must work out all the time. I must throw ladders more just to stay sharp. I must deal with way more rumors. Many women firefighters can attest to that. All I can say is, you’ve made it! Keep going. My goal has always been that I want to be the best fireman; not just “good for a girl.” I strive to be called a “FIREMAN” by good Firemen. To me, that’s the greatest badge of honor this woman firefighter can achieve.

Here’s another struggle that kind of sucks: you can sometimes be excluded from the rest of the company. You’re the woman, and sometimes that means not being included in group chats, invited to crew outings, or being able to form a close bond with the rest of the company. It’s difficult not having the same camaraderie, or brotherhood. Sometimes the guy’s wives don’t like that you work with them. Brotherhood is so important on the job. It’s your second family. So, all I can say to that is find your pack. It might not be your immediate crew, but there will be other firemen you will be able to go to and bond with. If you get invited to a company outing, make friends with the wives. Gain their trust so they are happy you work with their guy. When you have their trust, it makes the crew bond much more feasible.

With all this being said, I’m not saying you have to be perfect and better at each skill than every other guy on the job. Sometimes, it can be intimidating. There’s more pressure not to fail because you can feel like you’re under a microscope. But here’s something that most everyone can appreciate…keep trying. Be the first to try a rep at a conference or training, even if everyone is looking and you fail. Try again. Get it right. Don’t be afraid to fail. Embrace the uncomfortable and learn from your failures and mistakes. Ask for help. I don’t know if you know this, but there are a lot of egos in the fire service. One way I’ve found to break down the ego of the guy who gives you a hard time is to ask for their help. Admit you’re struggling with something and ask them to teach you. They change their mind from “this chick sucks” to “she works harder than everyone here.” Prove your intent and your worth to the company. When you do that, you don’t even have to fight your own battles anymore, they’ll fight for you, and they’ll protect you. You prove you can do this job, and the guys will stick up for you and have your back when the naysayers come around.

One last opinion that you can take or leave: I’ve noticed a lot of women are offended or don’t want to be called firemen. To me, being called a fireman is pretty much the highest regard someone can call you. It means you’ve made it and you’ve earned the respect of that title. Men don’t just call women firemen to offend them. If they wanted to be offensive, trust me, you would know it. Take it as an honor that the men are considering you as an equal and someone they respect on the job. When I’m called a fireman by any of my fellow firemen, it makes me feel like I’ve made it…that I’ve risen to the calling.

It’s simple, do your job, never stop training, remember why you wanted to be a part of this great profession. When we all took this oath, it was for THEM, the citizens. That simple oath gets lost in translation sometimes between egos, attitudes, seniority, and doubts. Don’t worry about what other people think of you, be the fireman that the people want showing up. Be trained, fit, and ready for battle. I don’t have a problem with other women in the fire service; I have a problem with anyone who just looks at this as a job and just tries to get by. This is bigger than just a job. It’s an oath, a sacrifice, and a calling. Be worthy of the calling. Ignore the mutts and remember why you’re here.

Commentary: Life Over the Fire Service