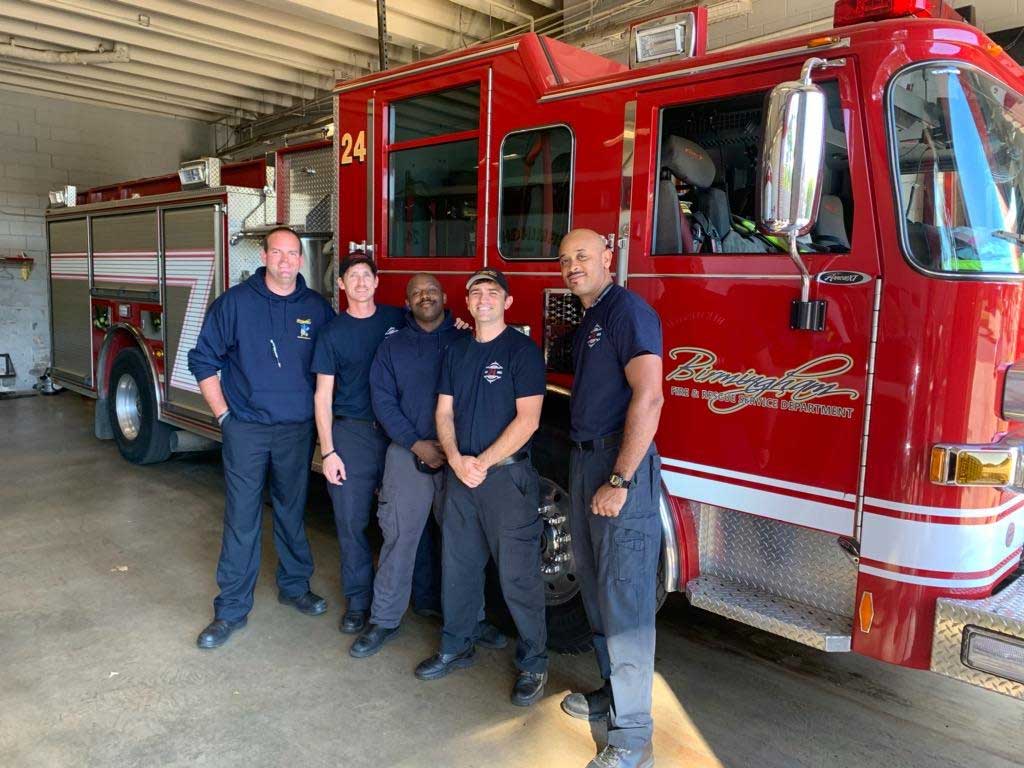 Almost three years ago I filled out the application to test for lieutenant. I didn’t want it. I wanted that driver’s spot that so many guys on the job want. I wanted to increase my level of responsibility without all the added stress of being in charge. I wanted to be in a position where I was still one of the guys. Also, and rightfully so, I wanted to move through every rank to learn the job and be a well-rounded guy. Fast-forward a couple years. Not a single person had been promoted on my job. City hall held all promotions up for a few years. Spots started piling up in all ranks. But by the end of July, I found my name on the list of 43 lieutenants scheduled to be promoted on August 15.

This wasn’t something I had prepared for lately. I was content and had consigned myself to the fact that I wasn’t going anywhere anytime soon. “I’ll make it on the next round,” I told myself. Now, out of nowhere, I’m a newly promoted lieutenant and had to transition from one of the guys to “one of them.” I had to find my leadership style and who I want to be as an officer. I spent the last six months finding myself. I reviewed information from countless classes I’d taken with Curt Isakson, Mike Gagliano, Frank Viscuso, Mark von Appen, and Todd Edwards. I read books from numerous authors on leadership. All this was undertaken in an effort to learn more about leadership and to supplement my personal experience.

Words of Wisdom for the New Company Officer

The Job: Issues for New Officers

Tips for Helping a New Officer Cope with Personnel Problems

From the Bay Door to the Front Door: The New Company Officer

FROM “BUDDY” TO “BOSS”: LESSONS FOR NEW COMPANY OFFICERS

A leader is a mesh, and the leader’s perspective a woven fabric of your collective experiences. Those experiences can be personal, those that you experienced firsthand. Or they can be intellectual, those that have been relayed to you through someone else’s experience, such as through a lecture, a story, a podcast, or a book. Your personal experience can be derived from having had a great leader and thinking you want to emulate him or her. It can also stem from having had a bad leader or watching others deal with their bad leaders. You can learn as much about what to do in leadership by doing the exact opposite of what you’ve perceived as bad leadership. I’ve had leaders win me over with a single act of grace.

What follows are some of the insights I’ve gleaned in trying to get ready for the role.

Without giving specifics, several years back I had a new lieutenant assigned to my firehouse. We made a fire, nothing special. We had a different officer riding the battalion that day than our normal chief. That particular day, I operated as I normally would on any fire, but questions started getting asked. That lieutenant took the blame for me. In an instant, my new lieutenant won me over. I saw that he cared about his people. What could have been trouble for me wasn’t much for him to take. Leaders need to protect their people. You are the go-between your crew and your boss.

Sometimes things will be out of your hands. I’ve had a member of my assigned unit, on a different shift, have a disagreement with another engine officer over something simple. He lost and was written up for insubordination. But the firefighter had a point. So, I wrote an email up the chain of command, not calling for his reprimand to be removed, but sticking up for him in the situation and asking that the department address this issue. Nothing came of it, but he knows I tried. Be a buffer and protect them when you can. It’ll go a long way in earning their trust and favor.

I’m in a weird spot. I’m a junior lieutenant who is also a paramedic. In my organization that means my assigned spot is to a rescue unit, but you spend your time bouncing all over the place, filling open spots some days or others riding your normal assignment.

On my first shift as lieutenant, my rescue and my engine ran a call for a childbirth. When we showed up, one child had already been born and the second was on the way. My captain looked at me and said: “Don’t you think we should call for another rescue unit?” Immediately I requested a second. He took off with the second rescue and the first baby. We got the lady down from the upstairs apartment and loaded up in the rescue when she started to give birth to the second baby. I coached one of the EMTs off the engine through delivering this breech baby. Everything went great. High fives were all around at the hospital when we all met up again.

The next shift, my captain informed me that he wrote a letter to admin to request recognition for myself and for the firefighter. Nothing ever came of his letter, no certificate of recognition for a job well done. But that letter being sent showed praise to the two of us. It’s the same as being told, “Good job kid.” That act alone of him taking the time to write it meant a lot to me and the young firefighter.

Your Guys Want to Be Trained

Most of them do, anyways. I love to train. My captain loves to train. We work together to come up with things every shift, whether it be stretching hose, watching various Webcasts, or reviewing ground ladders.

We like to train on the basics. This is something our crew has not been used to over the last few years. We strive to expand their horizons and open their eyes to other ways. With a little luck, they’ll be coming to you to ask what training we are doing today. You’ll find us out in the yard throwing ladders or maybe in the bay practicing mask ups.

We were told at the dinner table one night how much they are enjoying getting to train now. One thing we have talked about lately is what happens when it’s not a preconnect fire or a ground floor fire. Recently we had watched a presentation on engine operations that emphasized rope stretching. We had discussed it before and even practiced it once at the drill field, but this time it was fresh on the captain’s mind.

The next shift I got shipped off to the neighboring engine. Both our engines got dispatched for a stove fire, unfortunately to the wrong address, which was the rear of the apartment complex. I got off the engine and walked around while my engine backed up. When I rounded the corner, smoke was rolling out the third-floor apartment door. The captain pulled up right then, and I directed them to the appropriate driveway. I passed command and me and my backstep firefighter made the third floor and made entry to check conditions and keep it at bay with the pump can. The captain recognized the need for a quick play and called for the rope stretch. It went seamlessly and made my normal company look like rock stars. Not only that, but our junior guy got to pump his first fire, and it reinforced why we train.

It’s catchy and even the title of a popular book, but it’s the truth. As quoted by General Jim Mattis, Field Marshal William Slim, a British general in WWII, stated: “As officers, you will neither eat, nor drink, nor sleep, nor smoke, nor even sit down until you have personally seen that your men have done those things. If you will do this for them, they will follow you to the end of the world. And, if you do not, I will break you.” That drives home the point. Am I telling you to eat last? Not necessarily, but it is important that you show your firefighters that you care. When they know you care, they will buy in. And buy-in is what you need to accomplish your mission.

“Attitude reflects leadership, captain.” One of the best lines from the movie “Remember the Titans.” That movie is full of important lessons for all of us about teamwork and about being human beings. This short quote is powerful, accurate at all levels of the department, and a great benchmark for you as an officer to gauge your leadership. Are your guys all in? Do they have a great attitude? Are you building the family atmosphere that your house should have? Regardless of what’s going on above you at the political level of the department, your house can have a great attitude about the things you can control. Work hard to have a good attitude, but you don’t have to be a company man. It’s okay to let your people know how you feel about certain things and that those things affect you, too. It’s okay to show your people you care and gauge your success based on the attitudes around you.

The ultimate reason we come to work is to accomplish our mission. Make your mission, or as General Jim Mattis calls it, “commander’s intent,” known from Day One. Maybe your reputation has proceeded you. Maybe it hasn’t. Regardless, you need to make your mission known from the start and give your expectations that support that mission. I hope your mission is serving your citizens. It’s cliché but what we do day in and day out to prepare determines who lives and who dies, or at the very least how much property we save. “Expect fire and expect victims” can sum up my mission. We swore an oath to protect life and property. It is your job as a leader to make sure your people are reminded of this and help them see why we train.

CLAY MAGEE is an instructor with Magic City Truck Academy and a fire lieutenant and paramedic with Birmingham (AL) Fire and Rescue. He began his career with the East Oktibbeha Volunteer Fire Department in 2004. He has a bachelor’s degree from Mississippi State University and an associate of fire science degree from Columbia Southern University. He has been published in Fire Engineering and contributes to the Fire Engineering Community. He is an organizer of the Deep South Fire Conference. He has taught HOT classes at the Alabama Fire College, LSU FETI, Metro Atlanta Firefighters Conference, Firemanship Conference Portland, and multiple departments across the state of Alabama.

Drawn by Fire: No Luck Needed