Look back at your rookie years for just a moment. I’m sure that if you look back far enough, you might find a younger, hungrier version of yourself. Sometimes it is good to reflect on how things were back then. Think of all the changes that you have seen in your time on the job. Do you still put your turnouts on the truck every morning with the same sense of pride? Do you still top off your air bottle before your tour starts? Does the bell still sound the same to you?

Change is inevitable, and it’s not much welcomed either. We talk about wanting things to change, yet we also talk about how much we hate change. There never seems to be a common ground to stand on in this job. The brotherhood stays strong in a sense that we can all agree to disagree, shrug it off, and get back on the truck. This is how we tend to keep our egos off our shoulders and in check.

We learn so much on the road to retirement that we forget to teach along the way. Being a master of none means being disciplined and staying humble. At the end of the day, my fellow firefighters have my back, and I will have theirs. Being a master or achieving mastery simply refers to “having great skill at something or total dominance over something.” In this profession, it is very important to be a jack-of-all-trades, but we should never forget that we are also masters of none.

Being a master of none is simple. It means that we maintain proficiency without becoming too good for this job.

When I was in my rookie academy, a very wise chief said to me, “When you think you know more than the next guy, you should just quit.” It wasn’t until I worked with a couple of toxic crews later in my career that I realized exactly what the chief meant by this. When we think that there is nothing more to learn, we become a liability. We cannot be taught, we cannot be coached, and this is a disaster waiting to happen.

We see so much of this mentality in our veteran firefighters, those who should be leading the training and mentoring. They are on the sideline because they already know everything, and that’s the way it has always been. What can we give to the next generation of firefighters? Not everyone is a “Jack”; in fact, the older members call them “Jakes.” I have met a couple of Jacks or mentors who have helped me become a better probie, a better rookie, a better senior, a better driver, a better leader, a better person, a family man, a loving husband, and the list goes on. We are all here doing this job together because we all serve the same purpose, and most of us share the same experiences.

Lessons from the Caesars: Where Is Your Moral Authority?

Leadership in the fire service today is a difficult undertaking. Simply being placed into a position of leadership does not make one a leader. Becoming a good leader takes hard work not only in learning one’s trade but also in dealing with people and all their issues.

It would be nice if every fire service leader made correct decisions day after day. However, it seems a week does not pass when one looks at the various news feeds and sees a headline about some type of charge being brought up against fire officers and leaders for one reason or another. Why do these events occur?

One possible reason is the lack of a “controlling moral authority” among these people. I define “controlling moral authority” as an entity that places restrictions on moral decision making. Some people seem to feel that, at least for some of their actions, they are not accountable to anything or anyone. These actions may include sexual misconduct, misappropriation of funds, and theft.

I recently finished reading a book written nearly 2,000 years ago by the Roman historian Suetonius, entitled Lives of the Caesars. You might be wondering how this or any book on the ancient Romans could pertain to the fire service in 2019. The answer might surprise you. The book documents the lives of the first 12 Roman Caesars following the end of the Roman Republic.

Beginning with Julius Caesar, Suetonius documents the lives, rule, and activities of these 12 very powerful people. One very ominous theme throughout the book is that 11 of the 12 were assassinated or were “assisted” in ending their lives. You might think that all of these men being murdered would be tragic. However, once you read the book, it is easy to see where there were justifications for most of the assassinations. I do not condone political assassinations, but these men were brutal, callous, and sometimes deranged and demented Roman rulers who let the power of their position as leader of the Roman world go to their heads. Their behavior would make our current batch of political leaders look like angelic cub scouts.

I asked myself why these men behaved as they did. One thing all of them had in common was that they were at the top of the pile when it came to authority and were held accountable to no one. Some made themselves gods. In the end, each had no controlling moral authority. They did what they did because they could. Power literally went to their heads. They could be as benevolent or as brutal as they wished because, at least in their minds, no one could do anything about their behavior. They ran their kingdom the way they wanted and had the ultimate say in the way things went. This behavior eventually led to their early deaths.

Think of some of the people you have encountered who were “leaders” in the fire service. Having pride in yourself is one thing, but thinking you are above everyone else should be a giant red flag that tells you problems are around the corner. If you feel that your answers are better than all other answers and you do not feel the need to get others’ opinions on matters, you may have an issue with a lack of controlling moral authority.

While at the National Fire Academy recently, I had the opportunity to discuss leadership with many fire service leaders. One story that was shared popped into my head after I read the book on the Caesars. Without being specific as to location, a major city hired a new fire chief. After his arrival, other neighboring fire chiefs began to notice behavior that was out of the norm. This new chief, being powerful and knowledgeable, felt the need to order collar brass with an extra bugle, six bugles, to set him apart from the other fire chiefs in the area, who wore only five bugles. Today, that man who wore the six bugles is in prison for criminal offenses. He was a classic example of a person not having a controlling moral authority.

As a leader and fire officer, where do you want to take your career? Great leaders will often surround themselves with even greater people and will wisely listen to their counsel. They are controlled by law and morals and are accountable to each employee under them and to the citizens whom they protect. The decisions we make impact many people. Make your decisions count. Make sure you understand your controlling moral authority. 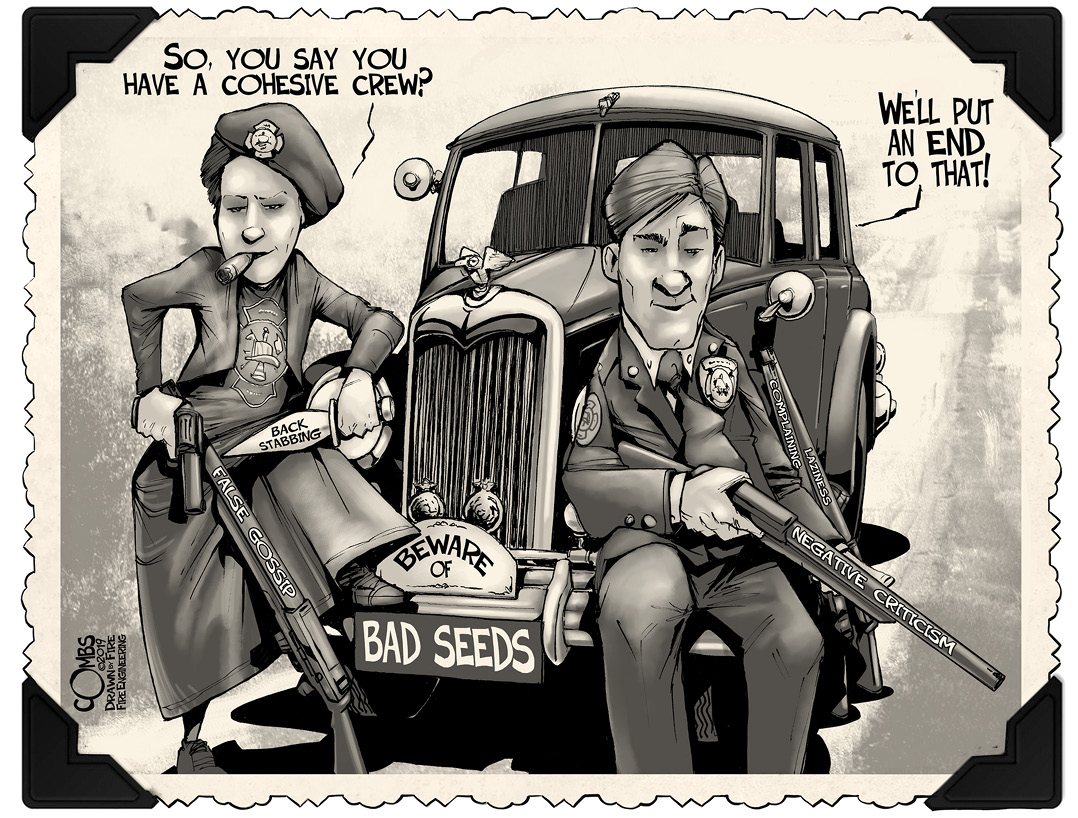