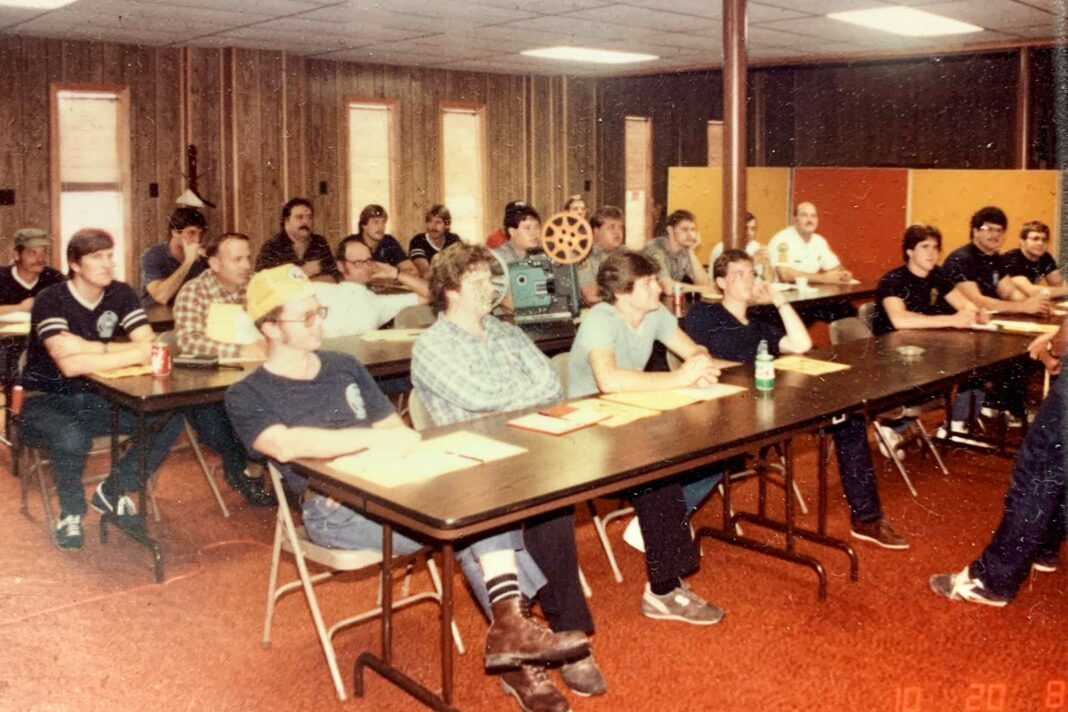 When I first joined the Hanover County (VA) Fire Department (now Hanover Fire-EMS) back in June of 1982, one of the highlights of the year was the Annual “Fall School,” which was a regional school conducted in cooperation with the Virginia Department of Fire Programs.  Hanover had one of the most well-known regional schools in the state for its diverse selection of high-quality courses, which was typically held on the second weekend in October.  This was where you could take a 16-hour SCBA Confidence Course with Fairfax Maze, which instilled terror in the minds of many young firefighters.  I recall standing nervously at the entry door of that maze wearing a steel cylinder and seeing my classmates being walked out of the maze by an instructor.  Your only wish was to somehow find your way out of the other side of that maze in one piece and still on-air.  It was a walk in the park compared to today’s training, but back then, it was quite intimidating. You could also take the Flammable Liquids Fire Class, which culminated in 60-foot high flames blasting from the flammable liquids pit that once existed at our training center.  The Fall School was a training event unrivaled in the State, and if you weren’t around in those days, you may not be aware that such an event existed.

Aside from the awesome educational opportunities at the Fall School, the famous seafood feast on Saturday night was not to be missed.  The department’s finest chefs prepared all manner of seafood and firefighters gathered from all over to talk shop over a cold beverage.  You would be dog tired and beat up, but that seafood and beverage never tasted so good as you enjoyed the cool fall night with your brothers and sisters, only to be back at it again in class the very next morning.

Over the years, the courses offered at the Fall School started to expand. The first non-traditional class offered in the program was called “Saving Our Own,” which was delivered by Rick Lasky, Tom Shervino, and Dave Clark from the Illinois Fire Service Institute (IFSI).  The program was brand new and Hanover built the first-ever “Saving Our Own Prop,” which is widely used around the country today (Fire Engineering, May 1998).  IFSI Instructor Seth Dale created the original design on a bar napkin, photocopied it, and faxed it to the Hanover training office (There was no email yet.) The staff spent countless hours on the corded phone talking with Seth to ensure it was constructed properly. Needless to say, the program was a tremendous hit with attendees, pushing students in ways they had not been pushed before.

After that program, the training staff worked with Rick Lasky to bring that type of training to Virginia.  After much planning and preparation, Greg Martin (Hanover (VA) Fire-EMS), Kevin Bartel (Henrico County (VA) Division of Fire), Tommy Hicks (Henrico County (VA) Division of Fire), and I traveled to northern Virginia to propose a program entitled, “Mayday-Firefighter Down,” to the Virginia Fire Services Board.  It was a tough sell, but the program was adopted by the State and is part of the basic training curriculum today.

After Saving Our Own Program, the theme continued at the Fall School as we brought in instructors from Chicago Fire Department, FDNY, and many others from around the country to provide unique hands-on training opportunities using acquired structures and live fire.  This training provided a strong influence that became the tactical base we work from today.  For a time, firefighters across the state knew they would find a new and challenging training opportunity at the Fall School. At its peak, the school attendance topped 300 firefighters from all over the region.

I’m not sure when the Fall School started, but I’ll never forget how it ended. The last year we planned the Fall School was 2001.  We had planned to try something different that year by bringing in three nationally known speakers for big room sessions over the weekend.  The location was to be the theater at King’s Dominion.  The lineup of speakers was Alan Brunacini, Rick Lasky, and Andy Fredericks.  We had completed most of the final details and were 30 days away from the big day when September 11, 2001, occurred.  As you probably know, we lost Andy and Squad 18 in the north tower that day.

Once the country settled down a bit from the attacks, we decided to press on with the school.  I reached out to another nationally known instructor, Scott Millsap, with ESE Training Associates in Atlanta. Scott was known for his incredible leadership and team-building programs. Scott had been battling cancer but agreed to step in for Andy. We offered Scott what we were going to pay Andy for the program, but Scott insisted that we give that money to Andy’s wife, Michelle.  That’s how cool Scott was! Unfortunately, Scott’s condition quickly deteriorated to the point that he could not travel, and he passed away a short time after.

That was the end of the Fall School. The loss of two instructors was all we could handle that year. The last time I talked to Andy in person was at FDIC 2000 on that Wednesday afternoon.  I was sitting in the 2nd-floor lobby writing the first article about attitude with Scott Thompson (Lewisville/Colony, TX) when Andy came walking by with a notebook. We all joked and chatted for a bit and asked what he was up to. He said that he figured that he better go write his keynote for the main session tomorrow. Scott and I weren’t sure if he was kidding or not, but if anyone could pull that off, it was Andy. Turns out, he was serious! That next morning, Andy hit the stage and delivered his talk called, “Don’t Worry About that Nozzle Kid, ‘Cause We don’t go to Fires Anymore,” holding the notes he had written the night before in his hand. My later conversations with him about the Fall School topics we wanted him to cover involved me telling him to, “Just do that thing you did in Indy.”

I miss Andy, I miss Scott, and I miss the Fall School. That event had a lot to do with shaping me as a young firefighter and that program went on to shape a large part of how we operate in our department today. Every time I see a regional school announced today, I remember the old Fall School days and smile.

Drawn by Fire: Ready to Fight