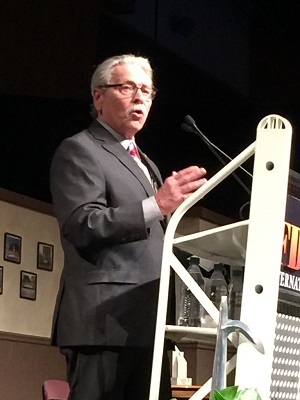 DR: What does receiving this award mean to you? What is its significance?

JT: I would not be here today if it were not for Fire Engineering and the FDIC. It gave me the acquaintance with the great minds and leaders in the fire service. The relationships I was fortunate to forge through the FDIC gave me the instruments of support to achieve surmountable success in the development to better understand fire behavior on the fireground. The research that I became involved with provided not only data but also live video that was the clincher to prove the business case I brought before the administration of the FDNY. Those results and video were the defining evidence in convincing the FDNY to review its policy and procedures in high-rise fire operations. The most profound consequence of this research was the fact that it was conducted by NIST in collaboration with Brooklyn Poly Technical University of NYU, and the results of the study were made public to the world. The impact of the information caused a ripple effect throughout the fire services nationally and internationally to also review their fire operations in high-rise structures. It also provided understanding and clarification to some of the most devastating events including line-of-duty deaths experienced in past history. This award is not about me; it represents proof to all of us that if we continue on a path to develop our skills and knowledge in this profession, we can achieve greatness.

DR: How long have you been teaching in the fire service? How did you get into instructing?

JT: I began teaching in 1987. I had attended a promotional course of study with Fire Tech Promotion Courses Inc. and was approached to become an instructor to teach young firefighters for promotional exams. In 1994, the FDNY held its first seminar open to the fire service on high-rise operations, and I was asked to present “Responding to High-Rise Hotels.” I was first accepted to teach at FDIC in 1997, and that experience and associations have broadened my abilities in developing training programs and public speaking.

DR: What do you look forward to at FDIC?

JT: I look forward to meeting with firefighters with the same passion to learn from the best of the best, the crѐme de la crѐme of the fire service. The FDIC experience has broadened my knowledge and appreciation to the collective challenge in the fire service to evolve in excellence of duty and service. It excites my passion in this most rewarding profession. It provides clarity of purpose to us and the public we serve.

DR: What message would you like to give to a first-time attendee or to someone who has never been to FDIC?

JT: It is rewarding enough just being a firefighter, paid or volunteer, in the fire service. As a civilian in private industry, I had no idea the breadth of knowledge required to not only enter into battle with fire in building structures but to deliver the service and demands at the many emergencies to which we are called each and every day. Today that includes all-hazard emergencies, including terrorist actions and threat. The FDIC offers instruction both in lecture format and hands-on training in all of these subjects. You will be guaranteed a better understanding of what we do, how we do it, and why. You will acquire the tutoring to not only improve on your career skills and performance but to prepare you to become a mentor for other firefighters.

DR: What do you think is the most pressing issue in the fire service, and what can be done about it?

JT: A conundrum in the fire service today is how to integrate technology and science applicably within the respective departments. There are various impediments for implementation of the latest science and technology, most notably the pushback and interpretation of the written results and personal analysis by some of the most influential individuals in the fire service. They acknowledge the science of late on fire behavior and methods of extinguishment but in some respects discount its relevance on the fireground.  I find that astounding! What I perceive is they believe some of the findings are in conflict with their perspective and position that professes aggressive interior attack no matter what fire circumstances we are confronted with on arrival. These individuals should participate in the science rather than interpret the data to their own experiences. I personally believe I could not live long enough on this earth to make every mistake imaginable: In other words, if I cannot learn from others, I cannot learn enough.

FIREFIGHTING OPERATIONS IN HIGH-RISES UNDER CONSTRUCTION

Jerry Tracy is the recipient of the 2016 Tom Brennan Lifetime Achievement Award. He retired as a battalion chief with the Fire Department of New York (FDNY) after 31 years.

He was a shipboard radio operator in the U.S. Navy from 1964-1968 and served in Vietnam aboard the USS Weiss. Among his decorations and citations were the National Defense Service Medal, the Republic of Viet Nam Campaign Medal, and the Viet Nam Service Medal with One Bronze Star.

After FDNY recruit training, Tracy was appointed to Engine 90 in the Bronx. He then became a member of 108 Truck in Williamsburg Brooklyn, in 1982. In 1987, he was promoted to lieutenant and was assigned to the 9th Battalion in midtown Manhattan and then detailed to 4 Truck in the heart of Times Square/the Theater District. He would eventually be permanently appointed to 4 Truck, where he honed the skills of high-rise operations and prepared a training course in high-rise operations for the Captains Development Course immediately after his own promotion to captain in 1993. He was then assigned to Brooklyn’s 15 Division. He and John Salka, then the captain of 48 Engine, developed an Engine Company Operations: “Back to Basics” course that became a buzzword throughout the fire service after it launched in FDNY.

In 1996, Tracy transferred to Tower Ladder 35. In January 1997, Ladder 35 arrived first due to One Lincoln Plaza for a fire on the 28th floor in the apartment of legendary jazz musician Lionel Hampton. This prompted his belief that such wind-driven fires could be attacked with alternate strategies and approaches rather than the direct frontal attack. He began a personal campaign to propose the use of a nozzle from the floor below the fire in situations where windows failed to a fire area. He set up a demonstration later that year with the members of Rescue 1, commanded by then Captain John Norman. It was to demonstrate that the 10-foot Navy Nozzle modified to flow in excess of 150 gpm in mist could be deployed effectively from the floor below a wind- driven fire. The department administration accepted the report but did not implement the concept or use of the tool. High-rise wind-driven events in the minds of a few were rare.

At FDIC Tracy met seasoned fire research engineer Daniel Madrzykowski from the National Institute of Standards and Technology (NIST). They waited  a decade for the acquisition of a structure suitable to conduct the research with live fire.

Meanwhile, in 1998, Tracy was called on to form and command a new elite unit within the special operations command, Squad 18 of Manhattan. Tracy was promoted to battalion chief in May 2000 and assigned to Battalion 49 in Queens.

The availability of a high-rise structure to conduct research finally materialized in June 2006. Deputy Chief (now retired) John (Skip) Coleman of the Toledo (OH) Department of Fire and Rescue assisted in the acquisition of a 30-story vacant office building in downtown Toledo. Live fire was not possible, but they were given the full use of the building to examine the prospect and efficiency of pressurizing the stairwells sufficient to render them smoke-free during fire operations with portable blowers (fans).  Tracy invited the Chicago (IL) Fire Department to join this initiative. This research had to include live fire to substantiate the concept.

A 16-story vacant residential high-rise was made available to conduct live fire research in November 2006.  Underwriters Laboratories joined the project. This research substantiated the use of portable fans to clear stairwells of smoke and maintain pressures to keep them smoke free in the majority of fires encountered.

In 2008, the FDNY was granted funding from the Department of Homeland Security to finance NIST in collaboration with Brooklyn Poly Technical University of NYU to conduct research specific to wind-driven fires on Governors Island. That project consisted of 12 wind-driven fire events in a period of 21 days. This research validated the use of fans to pressurize stairwells, cover failed windows effectively with wind control devices, and also extinguish fires with a nozzle device from a position of safety–typically the floor below the fire. The data and results of the research revolutionized FDNY’s policy, procedures, and response matrix to fires in high-rise commercial and residential buildings.

Tracy’s tenacity and commitment to firefighter safety, study in fire behavior, and development of tactics appropriate to the fires of today led to an outstanding career and much-deserved recognition with this Lifetime Achievement Award.

The Lifetime Achievement Award is named for Tom Brennan, who was the editor of Fire Engineering for eight years and a technical editor. Brennan had more than 35 years of fire service experience, including more than 20 years with the Fire Department of New York and five years as chief of the Waterbury (CT) Fire Department. He was co-editor of The Fire Chief’s Handbook, Fifth Edition (Fire Engineering Books, 1995) and the recipient of the 1998 Fire Engineering Lifetime Achievement Award.