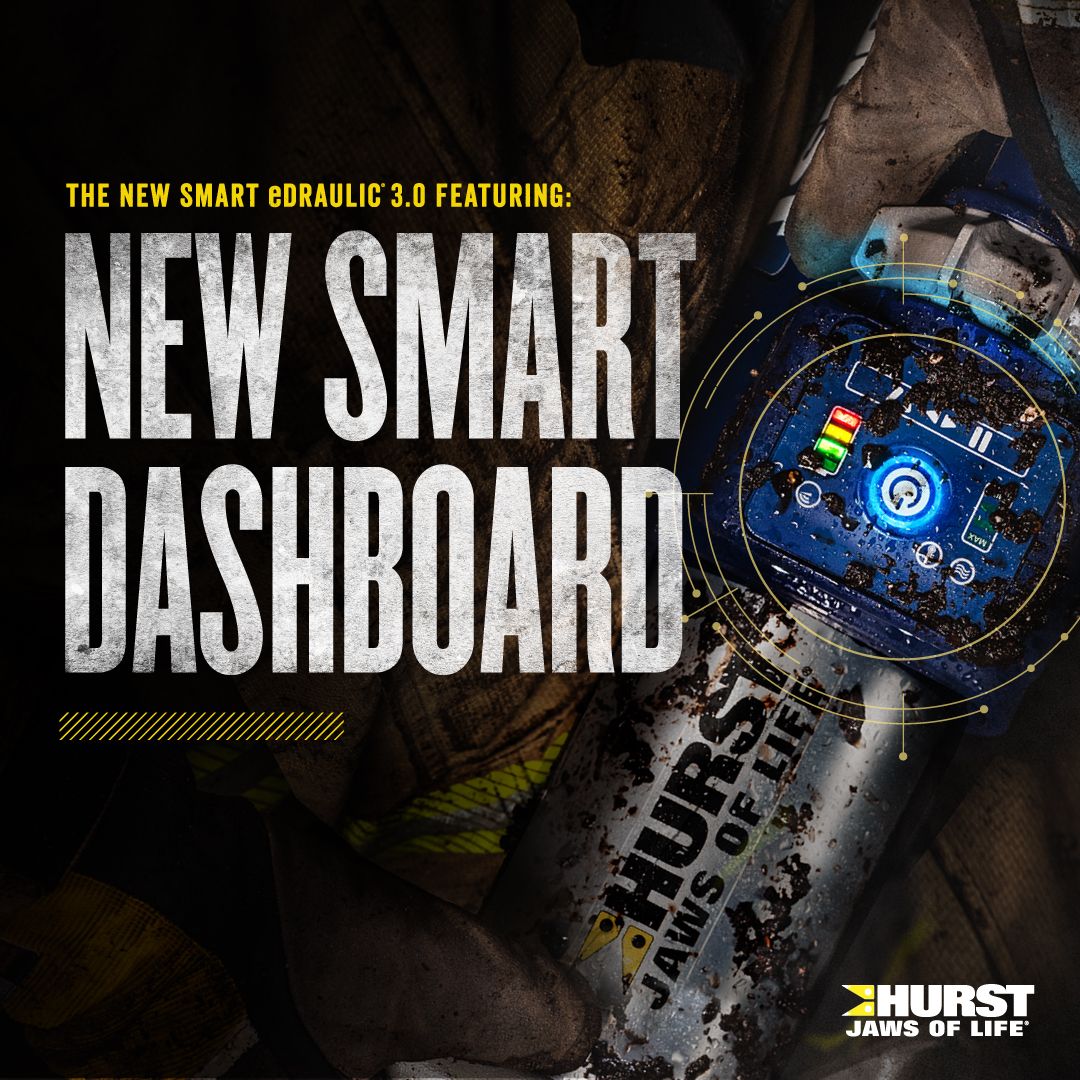 HURST Jaws of Life has introduced eDRAULIC 3.0, taking its fastest and most powerful battery-powered extrication tools and making them faster, operational in both fresh and salt water, and now also the smartest through a smart dashboard display that provides operators with real-time feedback on tool status.

“With the launch of E3, HURST Jaws of Life has taken the fastest, most powerful tools in the industry and made them also the smartest, giving first responders an at-a-glance dashboard for tool performance that allows them to keep their focus on the patient,” Hawkins said.

The E3 smart tool dashboard provides the tool operator with live, visual and easy-to-see tool feedback in three key areas: roll warnings, which assist the operator with cutter positioning; power level indicator, which alerts the user to real-time power level, so they can reposition the tool for another cut; and a battery charge status indicator, ensuring the operator is aware of runtime in real time.

The E3 line builds on the game-changing 2019 launch of the HURST Jaws of Life eDRAULIC Watertight Extrication Tool (EWXT) line, battery-powered tools that have a longer battery life and stronger cutting force, plus are completely operational when submerged in fresh water. E3 offers all the features and benefits of EWXT, and then some. In addition to E3’s smart dashboard, E3’s new turbo function adds increased user-controlled speed, and the tool’s patented watertight design allows operation in both fresh and salt water.

Other features and benefits of HURST Jaws of Life eDRAULIC 3.0 rescue tools include a brushless DC electrical motor for more efficiency and performance, an ergonomic design, LED lights and an optimized weight. All HURST Jaws of Life tools meet NFPA 1936 2020 standards for NFPA performance ratings.

HURST Jaws of Life introduced the industry’s first rescue tool in the 1970s and revolutionized the industry again in 2010 with the first battery-powered rescue tool line, giving first responders freedom from external power sources and faster deployment at the scene of a rescue. In 2014, HURST launched the next generation of eDRAULIC battery-powered rescue tools with the debut of the E2 line, which was stronger, lighter and easier to handle. The debut of the industry’s first watertight, submergible tool line in 2019 and the 2021 introduction of E3 with its smart dashboard continue the company’s tradition of innovation.

“Since the official introduction of the first HURST Jaws of Life rescue tool in 1972, we’ve raised the bar again and again for extrication tool performance,” Hawkins said. “E3 is the launch of a new generation of HURST Jaws of Life tools, and they’re going to continue to get smarter.”

About HURST Jaws of Life

HURST is the only manufacturer of the Jaws of Life® brand. There is no equal to saving lives. The company’s commitment to research and development and dedication to quality engineering and manufacturing has resulted in a line of innovative products known for outstanding safety, durability and performance. HURST Jaws of Life Inc. is a unit of IDEX Corporation, an applied solutions company. For more information about HURST Jaws of Life, please visit www.jawsoflife.com.