Firefighter Rusty Brown, Cobb County (GA) Fire and Emergency Services, was awarded the 2018 Ray Downey Courage and Valor award at FDIC International. Brown, a nine-year member of the fire service, responded on October 10, 2017, to a call for assistance from the Monroe County Fire Department. Two brothers, ages 17 and 12, had fallen from the top of the waterfall in High Falls State Park. Bystanders on scene located the 17-year-old standing in the waterfall and called 911. 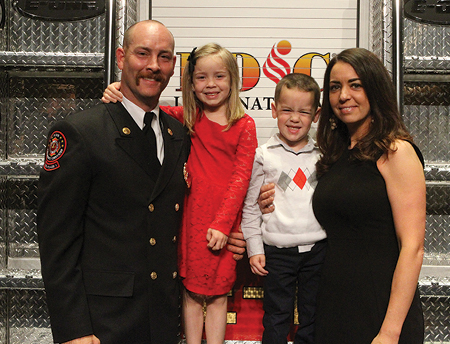 Brown responded with the pilot of a helicopter as part of the Georgia State Patrol Aviation. They assessed the situation and developed a rescue plan. Brown had to operate without a personal flotation device because of the size and turbulence of the waterfall. In fact, the waterfall washed him out and away from the victim on his initial approach. Brown had to make several attempts to get the rescue strap around the victim. Ultimately, Brown was lifted by his legs with the victim attached to him. Brown was inverted with his head under the water. He was injured in the rescue.

The late Robert F. Biolchini, former chairman of the board of PennWell Corporation, was remembered with a tribute and a moment of silence at the Opening Ceremony of FDIC International on April 25. Biolchini designed and initiated the Ray Downey Courage and Valor Award and had presented the award to the recipients since its inception. This year, Mr. Biolchini’s son, Tobin, made the presentation.

In his memorial address, Bobby Halton, educational director of FDIC and editor in chief of Fire Engineering, noted: “Longtime FDIC loyalists knew Mr. Biolchini from his appearance at FDIC to greet the fire service members and to present this award. What you may not know is that he admired and loved all firefighters, very, very much. He was moved beyond words by Chief Downey, you, and every other man and woman who made the necessary sacrifices to be a firefighter.”

The sons of Ray Downey expressed their appreciation for the honor Mr. Biolchini bestowed on their father and the fire service. “On behalf of the entire Downey family, we thank our Dad’s friend, the late Mr. Biolchini, for all he did to honor not only my Dad but the fire service as a profession,” stated Fire Department of New York (FDNY) Battalion Chief Joe Downey, son of Ray Downey. “He was truly my Dad’s friend; they bonded, as men of consequence and purpose do, in unspoken but deeply personal ways.”

FDNY Battalion Chief Chuck Downey added: “As a family, we have been blessed. We live in the greatest nation of all time. We serve in the greatest profession of all time. We are grateful for our good health, loving relationships, and strong faith. And among those wonderful gifts is this moment, which Mr. Biolchini is responsible for and to whom we will always be grateful. May he rest in peace.”

Goldfeder, a deputy chief in the Loveland-Symmes (OH) Fire Department, has been a firefighter since 1973, when he joined the Manhasset-Lakeville Fire Department in Long Island, New York. He has been a chief fire officer since 1982 and has served as a chief in Ohio, Virginia, and Florida. He is a 1993 graduate of the National Fire Academy Executive Fire Officer Program and the former chair of the International Association of Fire Chiefs VCOS Committee. He has been actively involved in the fire service and has many notable achievements. 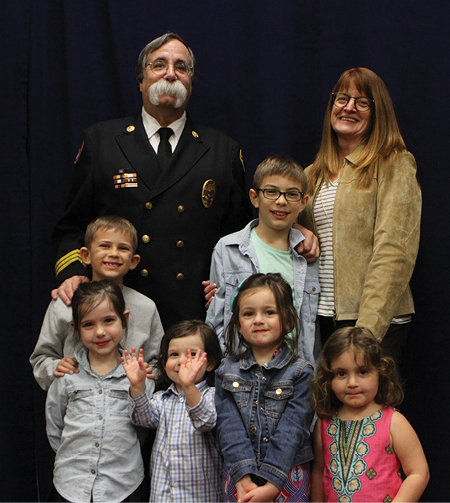 Probably one of his best-known activities is his affiliation with www.FireFighterCloseCalls.com, a 100-percent, noncommercial, independent, and free site with firefighter survival as its sole focus. In 1998, he, along with the widely recognized authority on risk in public safety Gordon Graham, created that Web site. Goldfeder is a news and editorial columnist for Fire Engineering.com and FirefighterNation.com and has a monthly column “Nozzlehead,” which has appeared in FireRescue for the past 20-plus years. He is the author of the best seller PASS IT ON; the royalties derived from its sale are being donated to the National Fallen Firefighters Foundation and the Chief Ray Downey Courage and Valor Scholarship Fund. Royalties from his second best seller Pass It On … The 2nd Alarm will be distributed to the same beneficiaries and the Firefighter Cancer Support Network.

The Lifetime Achievement Award is named for Tom Brennan, who was the editor of Fire Engineering for eight years and a technical editor. Brennan had more than 35 years of fire service experience, including more than 20 years with the Fire Department of New York and five years as chief of the Waterbury (CT) Fire Department. He was co-editor of The Fire Chief’s Handbook, Fifth Edition (Fire Engineering Books, 1995) and the recipient of the 1998 Fire Engineering Lifetime Achievement Award. 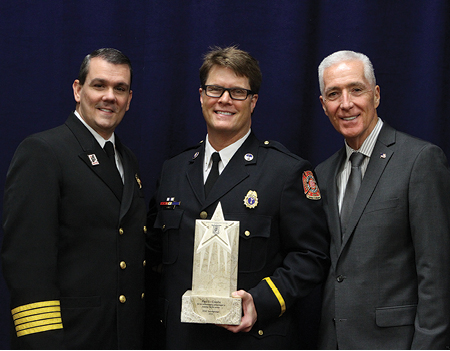 “Please know this recognition doesn’t belong to me but to everyone who has helped me along the way, and to my family, who supports my crazy dreams,” Combs noted. An instructor since 2000, Combs also instructs through his cartoons depicting timely fire service issues. They appear in Fire Engineering, FireRescue, and JEMS.

The award incorporates the Fire Engineering Training Achievement Award previously presented at the FDIC. It is named for George D. Post, a long-time member of the ISFSI and a member of the Fire Department of New York. Post was an illustrator for fire service publications and developed instructional materials. Many consider him to be the father of visual training materials for fire service personnel.