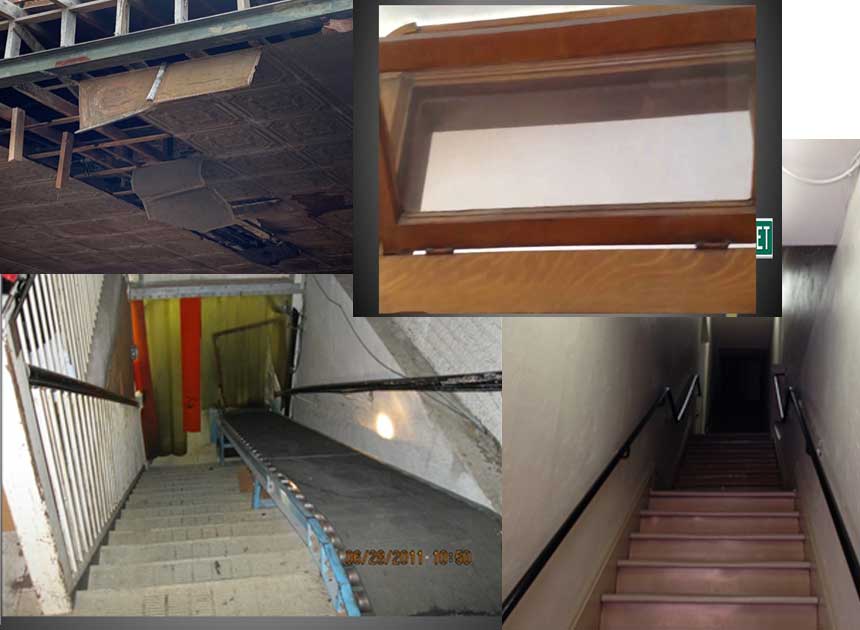 Article and photos by Joe Pronesti

In part one of this three-part series on seeing common but oft-forgotten issues specific to legacy Type III Ordinary Construction, we reviewed those common to the exterior of these structures. In this article we will review interior “optics” (items that need to be seen and attention paid to).  These lists are not all-encompassing, so readers should continue studying and reviewing these buildings as fires in them are not as common as the single-family dwelling. The mindset when facing these fires is very much different than any other single, standalone structure of Type II or V construction.

Let’s look at a few of the many interior optics that are specific to these legacy structures and should always be searched and thought of when dealing with a “Main Street” fire.

The better the historian you are, the better the firefighter you will be when it comes to working in a Type III building. When you review and size-up these buildings prior to the fire, you must be able to take yourself back in time to a time when there wasn’t air conditioning or LED lighting. Some of these buildings standing today may have even used gas lighting. What does this have to do with firefighting? When these buildings were built, they needed more space and light to enter the building naturally. Windows were larger and, when these buildings were attached to others, shafts and skylights were needed to bring in light over hallways and interior stairwells. Ceilings were usually 12 feet high to allow more light. Many of these buildings were the predecessor to the Big Box store, dollar store, doctors and health clinics, etc. in that they needed room and lots of light.

Over time and with improvements to HVAC and lighting, and, during the ‘70s, a focus on energy conservation, ceilings were lowered. False ceilings created voids where fire can travel freely and cause many firefighters a headache. It’s not uncommon to have the original tin ceiling (tin ceilings were used as an original fire stop and an alternative to plaster), a two-foot drop to a false ceiling using relic combustible acoustic tiles of combustible cellulose, which can rapidly spread fire. During remodeling, many old lighting structures and lamps are left in place but hidden from view. These can fall when an unsuspecting firefighter pulls them in a heavy smoke condition—a good friend of mine on my department was disabled when an old metal fluorescent light frame fell from a void space onto his head and neck.

A common issue on tin ceilings comes is the difficulty in pulling them. Many textbooks describe how to do it, but when responding with limited staffing, a fast-moving fire may get ahead of your crew. If you have a ton of responders available, have at it, but don’t expect a two-member truck company to pull real tin ceilings in a 120-year building.

When conducting walk-throughs and prefire planning in a Type III building, bring along a hook and/or step ladder to check the void spaces. If our buildings are like my town, you will be shocked at the amount of space above.

Compared to a residential dwelling, the stairs to the upper floors in these Main Street buildings will most likely be located on the exterior at the street front. This gives us a good shot when sending companies to the upper floors above a first-floor fire, and firefighters may have some protection, along with the occupants above. The stairs may be offset and not right at the sidewalk because of the depth of this type of building. This distance must be taken into consideration when stretching to upper floors. Every day in America, the preconnect line, mostly 150-200 feet, is sufficient in a residential dwelling. But in a two-story ordinary multi-use building, the first two sections may be used up in the street and entry to the first step going up. As mentioned by many other writers, we must have a maximum of two lines in a stairway; if you need more, find a different way to stretch these additional lines.

Many ceilings of stairwells heading up above a Main Street occupancy may also have combustible acoustic tile. Be ready to open hoselines up, and commanders must consider the placement of rapid intervention team lines to protect members above should these ignite.

Need something large from a Big Box store? It’s either going to be on a very high shelf on the main floor or in a small rear “employees only” area. A century ago, the stock from a Main Street hardware store was kept in a basement, and the stair access to the basement may have had a conveyor belt or lift of some type. Fast forward to 0300 in a smoke-filled area trying to get a line below, these items will at the very least slow you down. When going through these buildings prior to your fire, note the location of these conveyor belts. The hardware store may be only a memory, but the conveyor belts will still be there.

Today’s fire attack focuses on making an exterior hit on a residential basement fire. In a Type III building, this probably won’t be an option and you may have to get down the stairs to get first water on the fire. An old tactic that must be considered in today’s firefight is to keep a member at the top of the stairs.

We all know just how dangerous basement and cellar fires can be, and the hazards are even more pronounced in a commercial building, An old tip that saved many lives 50 years ago needs to be remembered today’s fire environment. On October 17, 1966, 12 firefighters perished when a floor collapse occurred in building of ordinary construction on 23rd Street in Manhattan.

Taking It to the Streets: The 23rd Street Fire

When encountered with a working fire in the cellar, the order comes to advance down the stairs. It’s a standard tactic to order another line at the top of the stairs to protect the crews, but what about when conditions first encountered don’t seem bad, staffing issues are delaying that protection line, or we have crews in the cellar? Firefighter Nicholas Cicero of FDNY Engine Company 5 was stationed at the top of the interior stairs located in the front half and leading down to the cellar of the Wonder Drug Store 23rd Street. His job, typical protocol dating back to the days before portable radio use on the fireground, was to keep an eye on first floor conditions. He was watching his company’s “six” as members had advanced a line down to the cellar to check for fire along with a truck company. While companies were not encountering poor conditions, just a few feet past them, concealed by a concrete wall, was a blazing inferno that would soon cause the collapse of the rear first floor of the Wonder Drug.

Cicero noticed an unusual rush of air on the first floor and noticed a three-foot square piece of cardboard move rapidly toward the rear of the store. He immediately yelled for his captain to advise him of something unusual happening. As his captain moved towards the base of the stairs to hear Cicero more clearly, the heat from the first-floor collapse occurring in the rear caused Cicero to get down low and protect his face with his coat. He repeated his warning again and then proceeded to the front door to escape. Engine 5 and Ladder 3 members began taking up in an orderly fashion from the cellar when hearing Cicero’s first warning, but then expedited upon hearing his second.

The crews were just able to make it out intact, but several members were burned. They survived. Cicero’s warning kept at least eleven more members from severe harm or death that night. The wise legacy firefighting tip of keeping a member at the top of the stairs saved their lives. What about today? Do we think about assigning someone to this position? In today’s modern environment, one doesn’t need just a collapse to occur to encounter a rapid change of conditions. Given today’s communication and reduced staffing levels, we no doubt let this one slip by, sending entire companies down, sometimes without protection of a firefighter or hoseline.

We all want in on the action, but when heading to the cellar, even when conditions appear “light” or “minor,” remember Firefighter Cicero and leave a member at the top.

In 1920, if you needed a lawyer, doctor, dentist, or so forth, you probably went above a store to a second and third floor in an ordinary constructed building. Today these offices are now possibly open-floor concept living areas, bars, or, in depressed areas like mine, simply vacant or transient single-room occupancies. The entry doors compared to a modern-day garden style apartment may not be self-closing These doors may also have a common feature in a legacy style door, a transom, a type of window set above the transom of a door. The wood door may sustain a heavy amount of fire, but the window in the transom may fail quickly, exposing a hallway to heat and smoke.

Many of today’s landowners will keep separate first-floor occupancies but knock down walls above several buildings, making one combined apartment building. The only way to understand these layouts is to go through them prior to the fire.

A basement fire on Main Street will probably be the worst-case scenario for your department. The fire will obviously expose not only the entire building and upper floors but maybe the entire block!  As with upper floor optics, you must get eyes on what’s below your Main Street buildings. Are there sub-cellars? Have walls been opened, created one large basement under what appears to be single, individual, first-floor occupancies?

The cockloft on Main Street legacy buildings were an early HVAC issue to allow ventilation and insulation. They can range from just a few feet in height to large enough to stand in. Firefighters must consider fire travel and fire behavior issues. While not a hard-and-fast rule, a fire originating in the rear of a building may be more of a concern than the front because of the slope of a cockloft.

Skylights were very common, especially on a block of attached structures, to allow light for stairwells and large rooms located on the upper floors. Failure to recognize the presence of these features combined with a lack of fireground intelligence gathering may lead command to believe the fire is “through the roof” and collapse has occurred or is imminent.  Command may write off the structure when in fact fire is being vented. Note their presence using many of the Web-based software options available to look above your Main Street.

JOSEPH PRONESTI is a 29-year veteran of the Elyria (OH) Fire Department, where he is a shift commander. He is a graduate of the Ohio Fire Chiefs’ Executive Officer program and a lead instructor at the Cuyahoga (OH) County Community College Fire Academy. He is a contributor to fire service publications and sites, including Fire Engineering and firefighternation.com. He will be teaching “Main Street Fires 2020: Are You Ready?” at FDIC International 2020.