Imagine the following scenario: You and your partner respond to an auto pedestrian crash on a moderately busy street in the center of a small city. Because of traffic delays, the response time is not the best—10 minutes to the patient—but, it is not extremely bad by any measure. You find a middle-aged female lying in the road; she never lost consciousness and has moderate lower leg trauma. The patient is belligerent because of the perceived slow response and is inconsolable. Despite your best efforts at verbal deescalation, the woman continues to berate the crew. This harassment becomes too much, and you feel your emotional control slipping away. Just as an insult fusillade is about to emerge from your mouth, you look up to see multiple parties holding out cell phones and videoing the entire encounter. Your anger becomes instantly displaced as you now want to shout at every person acting as a modern-day voyeur at this emergency scene. What do you do next?

Does this situation sound unrealistic? Absolutely not. North American roadways do not seem to be catching up with population growth, leading to an increase in crashes and scene response delays. Public safety workers have always taken the brunt of the public’s ire when service has fallen below anything considered spectacular.

And cell phones? There is only one word to describe their penetration into society—ubiquitous. They are literally everywhere. Every person on the streets nowadays has the capacity to be a live-action reporter, and the impact this has on society is tremendous. Remember one of the earliest incarnations of this “viral video” phenomenon—the videotaping of the March 1991 Rodney King beating? Instant video capacity means we are all potentially under surveillance at any time. 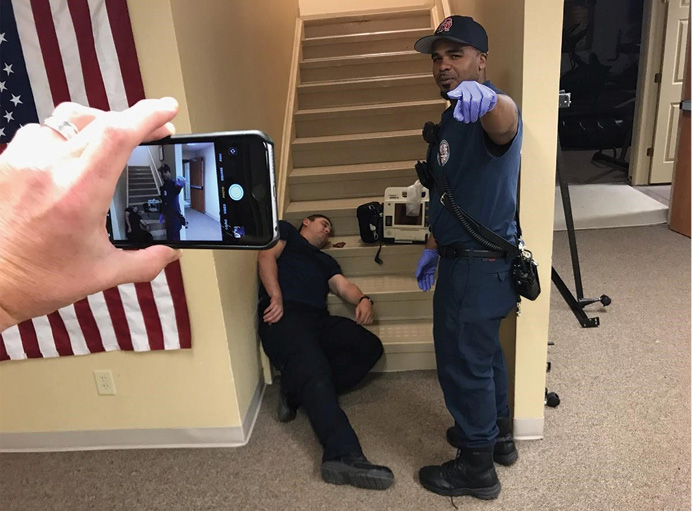 (1) How would you handle this situation? Is this a situation in which you can do anything about the video recording? (Photo by author.)

The issue becomes whether the nature of emergency medical services (EMS) work, which involves medical care and potential confidentiality issues, somehow affects what can be videoed and when. Should EMS workers be concerned when they see the general public scrutinizing their actions at an incident scene? Can they insist that the voyeur stop what he or she is doing? This article examines those parameters and suggests tactics to address the situation.

The Legality of Video

No rational person would accept a perfect stranger’s walking into someone’s house and video recording the everyday affairs of the occupants. A homeowner’s expectation of privacy inside his residence is paramount. In one case in California,2 the wife of a patient who died of a heart attack was permitted to move forward with her lawsuit against a film crew that followed paramedics into the house to record medical interventions without asking the homeowner’s permission. The footage was later used on a television show without the spouse’s permission or knowledge, causing the wife great emotional distress.

In the EMS sphere, the obvious place someone would expect privacy to be honored is in the back of the ambulance. Once the crew and the patient are loaded, it is foreseeable that potentially invasive procedures may occur and that seclusion should be the order of the day (think of disrobing a female patient to acquire a 12-lead ECG).

However, even this is not so clear-cut. What if you load a critical patient, stay stationary to perform some critical procedures (for example, intubation or securing an IV), and you do not shut the back doors to your rig? What if someone video records all your actions standing outside the ambulance with the doors thrown wide open?

Once again, the general rule is that these recordings are legal. Recording events that would otherwise be private (such as the goings-on at a private citizen’s property) from a public vantage point does not intrude on a person’s seclusion.3 This general rule even extends to video recording from the street what is happening inside a vehicle through a car window.4

Consequently, we should conclude that the law in the United States is generally favorable toward the average person recording the goings-on in public. There are two major reasons for this. First, the First Amendment of the United States Constitution guarantees a free press. With the advent of cell phone technology, it has become extremely easy for the average citizen to become a reporter by simply hitting the “record” button. Thus, the courts have become very hesitant to define who is a “reporter” for news purposes.5 Second, the courts have recognized that a citizen has a protected interest under the First Amendment to record the activities of public officials or contractors carrying out public functions (such as EMS) under a right to know the government’s goings-on.6

It should be obvious that there are times when a person should not be on video. The sick and injured are having a bad day. These people would not want anyone making recordings of what may amount to the worst day of their lives for other people’s entertainment on YouTube.

However, as the legal ramifications of video recording explained above show, people in public generally have no right to privacy. So, should the members of an ambulance crew just throw up their hands and say, “Oh well!” when they observe the actions of the video recorders and the patient’s pain being recorded?

No, they should not. Here are a few tips for EMS professionals to, hopefully, stop a video recording being made at an inopportune time:

The ubiquity of cell phone technology and Web sites where recorded material can be posted nowadays means that all of us run the risk of instant (and potentially unwanted) Internet fame. This is especially true of EMS work. The fact that EMS scenes involve lights, sirens, big equipment, and the sick or injured means that ambulance crews are likely to be the center of video attention. Because numerous EMS calls happen in public settings, your hopes of privacy are basically nonexistent. However, using common sense and these tips can help you and your patient get the upper hand on privacy again.

JAY FISHER has practiced law for more than 17 years in Georgia and Colorado. He specializes in civil litigation. He is a volunteer fire medic with the Rattlesnake and Kiowa (CO) Fire Protection Districts and works part time as a paramedic for American Medical Response in Boulder, Colorado.

Legal Minute: Issues That Get Fire Departments in Trouble