Emergency medical services (EMS) have grown considerably since our humble beginnings in the late 1960s and early 1970s. Cardiopulmonary resuscitation, endotracheal intubation, and intravenous (IV) therapy are among the interventions and therapies that were in their infancy in EMS and continued to develop and advance through numerous studies and clinical trials.

Gaining vascular access is crucial to administer resuscitation medications and fluids to critically ill patients. In many cases, especially with critical patients, veins tend to collapse and be unavailable for paramedic access. Intraosseous (IO) vascular access became the solution to this problem.

IO access was introduced in 1922, but it did not gain in popularity until the 1980s.1 IO access was frequently used to administer drugs to children during the 1940s. During the 1950s and 1960s, a more practical disposable IV catheter was created, as were improved insertion techniques. IOs lost their popularity until the 1980s, when several reports were published demonstrating the value of IO access, especially in children.2 Adult use lagged behind largely because adult bones were more rigid and difficult to penetrate with the IO devices available at that time.

In 1985, the American Heart Association advocated the use of IO access rather than endotracheal tube administration of resuscitation medications in patients without IV access. The American College of Surgeons Committee on Trauma’s “Advanced Trauma Life Support” course also advocated the use of IO in trauma patients.3 Following these recommendations, the technology improved, and IO access in critical adults became a standard of care.

Today in the United States, EMS providers treat about 20 million patients in the out-of-hospital setting.4 To achieve a high standard of care, EMS units must carry the necessary tools and equipment, which includes equipment for IO access in both adult and pediatric patients.

When a patient is in cardiac arrest or hypovolemic shock, veins have a propensity to collapse, making IV access nearly impossible in the prehospital setting. IO cannulation not only provides a quicker access in many cases, but it also provides noncollapsible intravascular access owing to the rigid structure of the bony matrix. (2)

Typical IO access sites include the sternum, tibia, and humerus. Once through the skin, the IO needle penetrates the outer compact bone layer and then travels through to the medullary canal (or cavity) where the bone marrow is stored. The fluids introduced into this canal flow into the central circulation by traveling through Haversian (or central) canals that are within the compact bone layer. These canals are connected to the bone marrow and to each other by the Volkmann canals, which feed into the central circulation (Figure 1). This creates a noncompressible space by which to administer fluids and medication when other veins have collapsed. (3)

The first devices used to gain IO access were manually inserted needles used for bone marrow aspiration. These devices require considerable manual force to insert. (1) The two manual IO devices available for use today, the Jamshidi Illinois IO infusion needle (photo 1) and the Sussmane-Raszynski IO Infusion needle (photo 2), are approved and recommended only for pediatric use. Their manufacturers recommend placement of these needles in the proximal tibia for children up to six years old and in the distal tibia or distal femur for older children.

To find the landmark for the proximal tibia in infants and small children, extend the leg and locate the patella. The site is just below the patella and one finger width (1 cm) medial along the flat aspect of the tibia. By pinching the tibia between your fingers, you can find its center.

For adults, the site is in the same area, but the measurements are greater. The site is two finger widths (3 cm) below the patella and one finger width (2 cm)5 medial along the flat aspect of the tibia.

Using the appropriate landmark, insert manual IO devices through the skin to the bone with firm downward pressure. At this point, with continued downward pressure, advance the needle assembly by rotating it in either a steady clockwise motion or a twisting motion (depending on the IO brand) until you feel a slight give or pop. At this point, the needle should stand upright on its own.6

Two other manual IO devices currently available are activated by pressure: the Bone Injection Gun (BIG) and the FASTResponder. The BIG was developed in the 1990s; it is available in two sizes: one for adults (photo 3) and one for pediatric patients (photo 4). This spring-loaded, impact-driven device delivers a trocar and a needle directly into the bone. The trocar is removed; the needle is left for administration of medication and fluids. BIG is recommended for use in the proximal tibia and humerus (adults only). (3)

To identify the landmark for the humeral insertion, the patient must be lying supine. The patient’s arm should be bent at the elbow in a 90⁰ angle with the hand resting on the abdomen over the umbilicus. Begin by sliding your thumb up the anterior shaft of the humerus until you reach the greater tubercle. This is the surgical neck. The insertion point is approximately one centimeter above the surgical neck. (3)

Once you locate the site, place the barrel of the BIG over the insertion site perpendicular to the bone. Use one hand to stabilize the device at the base of the barrel and the other hand to remove the safety. Once the safety is removed, rest the palm of the same hand on top of the BIG, and grasp the winged portion with two fingers. Gently apply pressure with the palm of the hand to deploy the cannula and trocar. The trocar is removed leaving the cannula to be secured when ready to use. When using the humeral insertion site, the arm must be secured to the abdomen, and the site must be protected to prevent dislodgement of the cannula. (3)

The FASTResponder device (photo 5) is the only IO device currently approved by the Food and Drug Administration for sternal access for patients 12 years of age or older. (3) Per the manufacturer’s instructions, insert the infusion tube in the manubrium, which is 15 mm distal to the sternal notch, where the bone thickens to 13.30 mm. Find the insertion site by aligning the notch on the device with the patient’s sternal notch.7

This device relies solely on operator force for insertion. Once you locate the insertion site, place the FASTResponder perpendicular to the manubrium. Use two hands to deploy the infusion tube by pushing down completely to the chest. The bone probe needles and the depth control mechanism prevent overpenetration. Remove the delivery device, leaving the infusion tube. (7)

The EZ-IO is the only battery-operated, power-driven IO device currently on the market (photo 6). It can be used in the humerus, proximal tibia, and distal tibia in adults and pediatrics and an additional site, the distal femur, for pediatrics only. Three needle lengths are available so that it can be used on pediatric and adults patients of all sizes. Each needle is marked with a black line five millimeters from the hub to assist the user in determining correct length. Once you locate the insertion site, advance the needle through the skin until it touches bone. The black line on the needle must be visible at this point, or the needle must be replaced with a longer one. (5)

With the variety of IO devices available, several studies have suggested that attempting peripheral IV access rather than going directly to IO access may delay or hamper treatment for critically ill patients. One trial compared the success rates and time to insertion between IO and IV access in severely dehydrated children requiring fluid resuscitation. IO access was successful 100 percent of the time within five minutes as compared to a 67 percent success rate within the same period of time for peripheral IVs. (2)

Another study of 300 children (ages 0 to 18 years) found that the younger the child, the less likely a paramedic will be successful with peripheral IV access in the prehospital setting. IV access was successful in two-thirds of the children, but in children less than six years old the success rate dropped to 49 percent. (2)

IO access might be faster than peripheral IV access, but are the infusion rates any different? Studies suggest that the IO route is just as effective as the central venous route and may be superior to the peripheral IV route during cardiac arrest. (2) Although complications have been reported to be minimal (<1 percent), problems such as fractures, compartment syndrome, osteomyelitis, and extravasation of medications and fluids into the soft tissue have been reported. (2) The main contributor to these complications is poor antiseptic or placement techniques. (1)

Two main contraindications apply to all IO devices. First, IOs should not be placed in a bone that is fractured or was previously penetrated (i.e., used for another IO attempt). Second, an IO should not be placed where there is vascular injury or interruption in tissue or muscle near the bone. For example, if the pelvis or abdomen has sustained an injury, placing distally (as in the tibia) would not be recommended. When possible, avoid the following: areas with cellulitis, burns, or osteomyelitis involving the site or patients with osteogenesis imperfecta (a genetic disorder characterized by bones that break easily) or osteoporosis. (2) Also avoid the proximal humerus on the side of a mastectomy. (5)

Each device has its advantages and disadvantages, as several studies have concluded (Table 1). All have similar success rates, despite advertising claims to the contrary. The manual and impact-driven devices have an average range of insertion time of from 17 to 50 seconds. The average insertion time for the battery-powered IO is less than 10 seconds. (4) The EZ IO is the only battery-powered device on the market and requires less force to insert compared to the other devices. (5) The FAST Responder is the only IO currently approved by the FDA for sternal placement but is also the only one not approved for use on younger children (< 12 years of age). (3) Additionally, FAST Responder necessitates interrupting cardiopulmonary resuscitation for insertion. (7) Although the majority of IOs (except the FAST Responder) are approved for use in infants less one year old, current studies recommend use of manual needles or battery-powered devices in infants. (2) 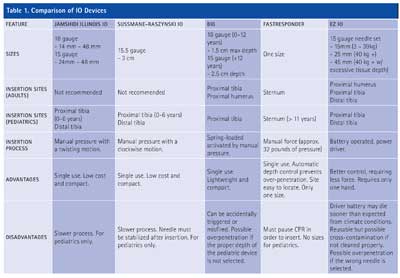 With the growing needs our society is putting on EMS, we must be prepared and ready to treat those who require our help. From mass-casualty incidents to a growing number of cardiac arrests, having a variety of alternatives to gain vascular access is crucial to our success in saving lives.

CONNIE PIGNATARO is a lieutenant for Oakland Park (FL) Fire Rescue. In 2011, she was the first female to be promoted as an officer in Oakland Park. She has a bachelor of applied science degree in public safety administration and certifications as instructor III, live fire instructor, and vehicle and machine rescue technician. She was introduced to the field of fire rescue as a volunteer for her local Community Emergency Response Team in 1998. This experience prompted her to change careers. She returned to school and, in 2002, was hired by Oakland Park Fire Rescue.