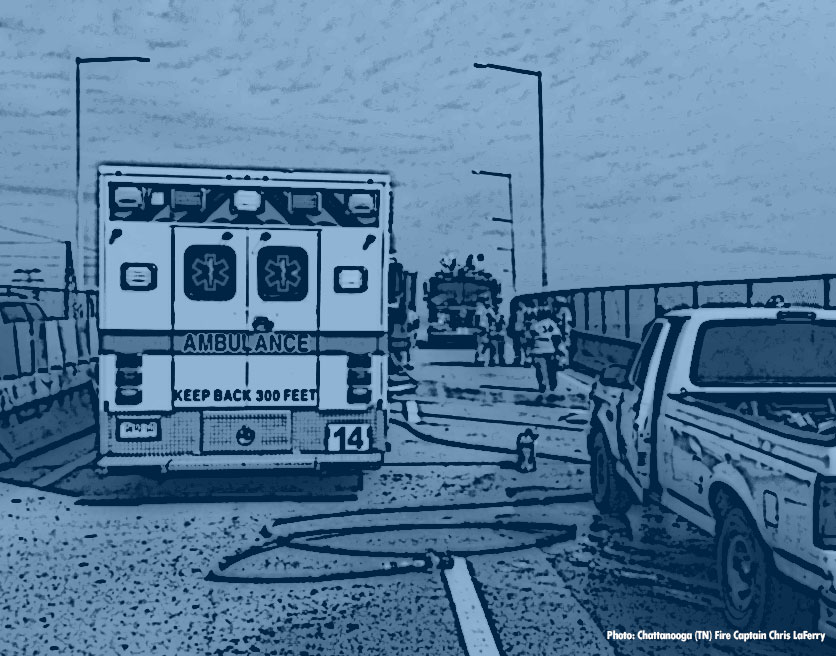 Although most fire departments have taken an all-hazards approach to emergency response, the primary mission of the fire department remains fire suppression. Fire departments are well-equipped to provide emergency medical services (EMS), and in the United States, 45 percent of fire departments provide an ambulance service.1 Members of these departments, especially those assigned to ambulances, spend much of their time carrying out EMS-related responsibilities. Although some communities assign their ambulance personnel strictly to EMS duties, with the proper equipment, training, procedures, and culture, the fire-based ambulance can be a valuable asset on the fireground.

Fire-Based EMS: The Role of Ambulance Crews on the Fireground

The exterior of the ambulance should have dedicated compartments for each member’s fire suppression personal protective and other equipment. Having everything stored in one place allows the crew to quickly get ready to go to work on the fireground. Keeping the members’ equipment in separate compartments allows them to get ready quickly without getting in each other’s way. Keeping fire suppression gear in compartments separate from EMS gear is more efficient and prevents cross-contamination.

In addition to their gear and SCBA, the following tools should be kept on the ambulance: a thermal imaging camera, a four-gas meter, an eight-pound flathead ax, a halligan, and a six-foot roof hook. The tools on the ambulance should be in good condition and of top quality. Many times, the ambulance gets older, low-quality tools. Nothing kills morale faster than getting equipment that is left over from the engine. Give the ambulance crew equipment in which they can take pride, and they will!

An example of a poorly defined procedure would be assigning an ambulance as the initial rapid intervention team (RIT) without giving any further guidance as to the responsibilities of that role or to whom they should report. This leads to a varied approach to this task that can range from the crew’s aggressively performing initial RIT functions such as a 360° size-up, gathering equipment, and softening the building to a crew that shows up and stands in the front yard. To get the most out of the fire-based ambulance crews, it is essential that they have a clear understanding of their responsibilities and to whom to report.

Quality equipment and well-written procedures mean nothing if they cannot be properly used and implemented, which is why training is so important. Training should always start with the basics: masking up, stretching and moving hoselines, forcible entry, search, and ground ladders. These tasks can be done individually or at the company level. In stations that have both an engine or a ladder company and an ambulance, the company officer should make every effort to include the ambulance crew in company drills. Also, the ambulance crew should be encouraged to drill on its own.

Although many of the above mentioned items are the responsibility of administration or necessitate a group effort, there is one thing that is always the sole responsibility of the individual ambulance crew member. That is mindset. The importance of showing up for work with the proper mindset cannot be overstated. No matter how slow of a station you work at, you must show up to work every day expecting to go to a fire. This will affect everything from how you put on your gear on the truck to how you check your equipment to how well you take care of your mind and body. You cannot allow yourself to become complacent.

Many tasks can be assigned to the two-person ambulance crew. They include, but are not limited to, forcible entry, search, roof, hoseline advancement, and RIT. With the proper training and equipment, the ambulance crew can complete these tasks independently or by assisting another company on the fireground.

Forcible entry. It can be completed independently or as a two-person team. Having an ambulance crew that is proficient in single-person forcible entry allows the crew to split and force multiple doors to a structure. Should a difficult door be encountered, the crew can work together to accomplish the task.

Search. A two-person crew is ideal for primary search in most residential occupancies. The crew size allows for quick, efficient movement that necessitates minimal communication and maintains crew accountability. Multiple search crews may be necessary for larger buildings.

Roof operations. In many fire departments across the country, truck companies are understaffed or nonexistent. In the case where the truck company is committed to interior operations, the ambulance crew can be sent to the roof. Although the roof is most often associated with vertical ventilation, many other important tasks take place on the roof. A crew on the roof can be vital to size-up by checking the C side of the building, investigating the building construction and observing any rooftop utilities, as well as checking for fire extension.

Hoseline advancement. The fire goes as the first line goes. If the first-due engine needs additional personnel to stretch and advance the initial attack line, the ambulance crew should assist them in this task.

The present-day fire department is constantly asked to do more with less. Fire-based EMS is not a new concept, and it is important to remember our primary mission: the protection of life and property from unrestrained fire. By effectively using fire-based EMS crews, fire departments can maximize their effectiveness on the fireground.

TIM GRISWOLD began his career in the fire service in 2000 as a Fire Explorer. He attended the University of New Haven, where he earned bachelor’s degrees in fire administration and fire and arson investigation. He joined the Portsmouth (NH) Fire Department in 2012 and has been primarily assigned to an ambulance. He is a staff instructor with the New Hampshire Fire Academy.