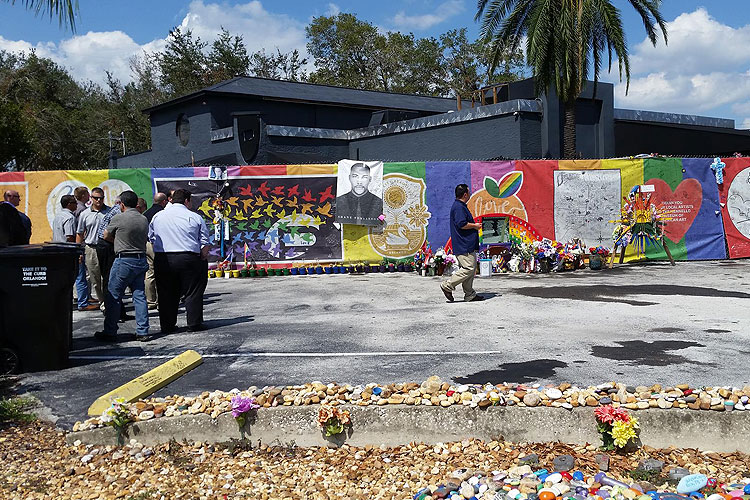 In the aftermath of the Pulse Nightclub terrorist attack, the community has turned the site into a living memorial of sorts. Committee members visited the site during a recent development meeting in Orlando.

On June 12, 2016, Omar Mateen walked into the Pulse Nightclub in Orlando, Florida, and began an attack that at the time rivaled that of any previous active shooter incident. When it finally ended four hours later, 49 people were dead and dozens more injured. The aftermath of the shooting paralyzed a city and shocked the nation. Mateen had pledged allegiance to a terrorist organization and carried out an attack of a scale hardly seen since 9/11. Orange County (FL) Fire Rescue Chief Otto Drozd III contacted the National Fire Protection Association (NFPA), requesting that the agency start developing a standard for responders and stakeholders to help with guidance in preparing for an active shooter or terrorist attack in their community.

Fast forward a year and a half later and that standard has been written. More than 50 subject matter experts dedicated their time and energy to produce NFPA 3000, Standard for Preparedness and Response to Active Shooter and/or Hostile Events. In December, NFPA 3000 was approved for expeditious development and release of a provisional standard. This will be only the third time in history that the American National Standards Institute (ANSI) has authorized the fast-tracking of a standard once completed. This month, NFPA has released the standard for public input and review. This open period will close on February 23, 2018. This too is a fast-tracked comment period, with expected release of the adopted provisional standard sometime in April.

NFPA 3000: A First Step Down a Long and Perilous Path

Additionally, the standard is not directed or geared solely towards the fire service. The standard, in its current draft, consists of nearly 80 pages and 20 chapters. In particular, the chapters include competencies for not just fire and EMS but law enforcement, as well. Recovery, incident command, 911 centers and communications, risk assessment, and facility readiness are all covered in depth, as well as financial management, public education, training, and personal protective equipment. The standard was developed in cooperation with experts and stakeholders from every aspect of emergency response imaginable. This included private organizations, training experts, emergency managers, federal, state, and local law enforcement personnel, and recovery disaster experts.

The standard was written with all responders in mind, regardless of whether they are from large or small organizations. Municipal and rural communities were well-represented by the vast number and diversity of the committee members. Active shooter and hostile events are dynamic and have not been prejudice to a jurisdiction’s size or complexity. To create a standard that took this into consideration was quite challenging, to say the least. Many days and hours of meetings, with some passionate discussions, resulted in a broad standard that can easily be applicable in every jurisdiction in the country.

The committee not only recognized but took into account that some communities will respond to these types of emergencies with very limited resources. Further, the ability for these areas to budget monies to equip responders with the kind of training and equipment available on the market for active shooter response is not feasible–some departments do not possess the money to keep a fire truck in service. Conversely, recommendations for equipment and training provides larger organizations the ability to plan and prepare their budget to meet the standards intentions based on their size and risk for such an event.

RELATED: Violent Scene Response for Fire and EMS Agencies | Steven C. Hamilton: Terrorism in 2016 | Selection and Use of Ballistic Protection for Fire and EMS Personnel | Responding to Scenes of Violence | Active-Shooter Incidents: Planning Your Response

The committee’s work is far from complete. After the release of the provisional standard, the committee will continue to review and revise as needed throughout the next few years to complete and release the next addition. As these types of events continue to occur and the tactics of the aggressors change in an attempt to inflict more casualties, the standard will need to morph and change in response to and in anticipation of the aggressors’ adaptation to our preparation.

Follow the link www.nfpa.org/3000 to review the standard and submit any input, questions, or concerns for the committee to review. Members will meet again in March to discuss the national feedback submitted and revise the standard as needed. In April at FDIC International 2018 there will be a special presentation of NFPA 3000 during the pre-conference workshop class, “Responding to and Preparing for Acts of Violence.” You are highly encouraged to attend the class at this conference as well as review and comment on the draft standard while it is in the open comment period.

STEVEN C. HAMILTON has been a member of the fire service since 1996.  He is a Lieutenant with the Fort Jackson (SC) Fire Department and a Senior Reserve Deputy with the Richland County Sheriff’s Department.  Hamilton is a certified Fire Officer III, Instructor III, Arson Investigator, as well as an EMT and an EMT instructor. Hamilton proudly served his country in the United States Air Force for four years and has been a member of volunteer departments in SC, TX, and NY.  He is also the author of “Responding to Scenes of Violence,” a Fire Engineering Books and Videos release, and an FDIC educational advisory board member.