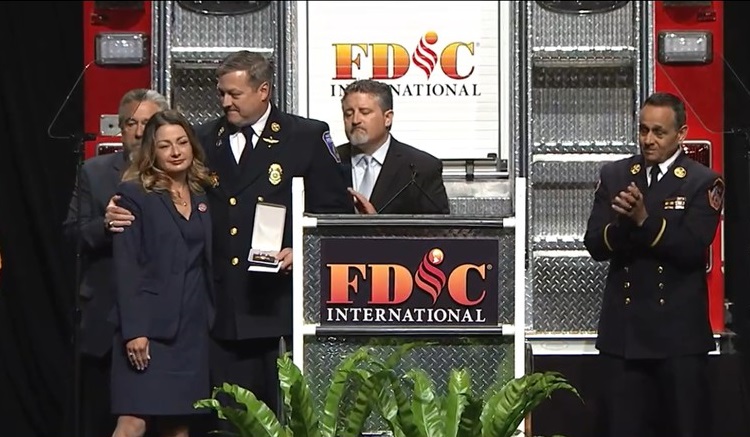 I had the great privilege of attending FDIC International 2019, and it was, as always, a wonderful experience. A shot in the arm. A reacquaintance with like-minded souls who are more than friends; they’re family. I always bring something back with me, a lesson learned as I move among the firefighters gathered there, something that I hope to carry always; never forget; and, hopefully, to share with others. This year, my keepsake is a story of courage and valor on a whole new level.

Every year during the FDIC International opening ceremonies, an award is presented to a firefighter that displays extraordinary heroism. This award commemorates the life and career achievements of Deputy Chief Ray Downey, who died on 9/11 while commanding rescue operations at the World Trade Center. Chief Downey was a 39-year veteran of Fire Department of New York (FDNY) and the most highly decorated firefighter in the history of that department. His sons present the Ray Downey Courage and Valor Award to a deserving recipient in honor of their father. Many names are submitted; firefighters perform courageous acts every day, but only one is chosen. This year, the presentation was especially moving because it is awarded posthumously and placed in the hands of the woman there to accept it: the firefighter’s grieving widow, Melanie Clark.

On October 11, 2018, Hanover (VA) Fire-EMS was managing a heavy call volume because of the impacts of Tropical Storm Michael. At 0900 hours, Lieutenant Bradford T. Clark was on the phone with his loving wife Melanie when the tones went off yet again, summoning Clark and his unit [Engine 6 E6)] to an accident on I-295 South. He told his bride he loved her and promised to call her back when he returned safely to the firehouse, a promise he had never before failed to keep. But he would that night, for the first and only time.

As he was dismounting the engine to size up the incident, Clark observed a tractor trailer speeding toward the unit when he rounded the front of the apparatus. In that split second, Clark could have simply dived to safety, thus saving his own life, but this isn’t who he was. Instead, he turned toward the engine and stayed in the path of danger, shouting warnings to his crew as they too were preparing to exit the engine. Clark’s warning gave them a chance to gain cover and brace for impact. One firefighter heard Clark’s cries and dove head first back into the cab as the tractor trailer struck E6; he emerged from the wreckage without any significant injuries and was able to immediately treat his fellow firefighters on scene. The driver of E6 and the jumpseat firefighter sought cover, but still received significant life-threatening injuries. The impact drove the engine over the top of Clark where he stood, pinning him underneath. He was killed instantly. His selfless actions resulted in the survival of his entire crew as he gave them just enough warning to move. His concern for the safety of his brothers exemplifies the highest traditions and values of Chief Ray Downey and those firefighters who gave their lives on 9/11. Lt. Brad Clark is the embodiment of courage and valor, of putting the lives of others ahead of his own. This story is exemplary, but it doesn’t end there.

Melanie Clark is not at FDIC International just to accept her husband’s award. She is there to teach a class as well, entitled, “My Lt. Didn’t Come Home: The Devastation of Distracted Driving.” The description of it reads as follows: This class highlights real-life incident where Lt. Clark died in a line-of-duty-death and two other firefighters were seriously injured during a highway incident. The program provides critical information on how fire departments can better prepare to operate on the roadways and what to do when things go horribly wrong, tactics for working on roadways, and key lessons on ways departments can help their responders prepare individually and as a department. 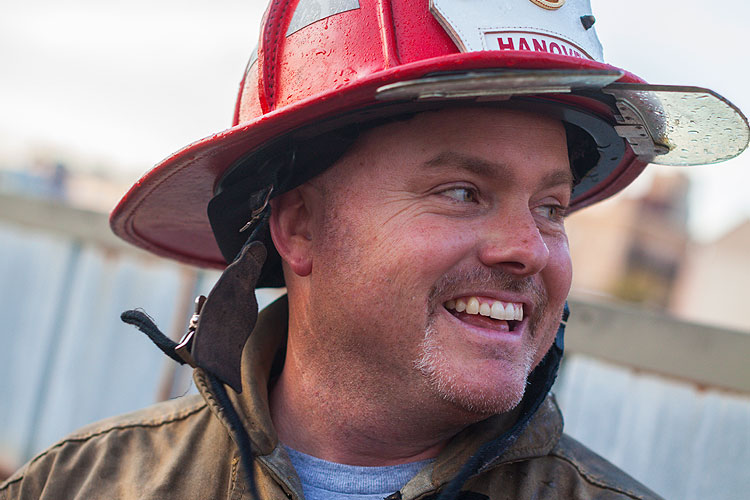 I decided to go to this class, which was right after opening ceremonies, instead of sitting front row center in my husband Mike’s class to cheer him on, which is what I usually do. Believe me, I don’t want to go to Melanie’s class—this topic is every fire spouse’s worst nightmare—but I feel I must go for two reasons: (1) I wish to support her, I truly do, and (2) I happen to have a unique platform with which to share important lessons for the spouses and families of firefighters.

I fear this class will be a major tearjerker, just as the award ceremony was, and I selfishly don’t want to be wearing mascara down my cheeks for the rest of the day. “Perhaps I’ll be able to fight back the tears,” I think as I take my seat. But I won’t—this will be an exercise in futility. The tears flow almost from the moment Brad’s smiling face appears on the screen and Melanie begins to speak. It doesn’t help that those seated around me are sniffling and wiping their eyes, including my dear friends FDNY Captain Mike Dugan and Wallingford (CT) Fire Department Battalion Chief Jim Duffy. As Duffy gazes at Clark’s picture, he says to me, “I like his face. It’s a nice face. I can tell just by looking at him that we would have been friends.” I realize very quickly I’m fighting a losing battle and instead focus on taking clear notes through blurry, watery eyes.

Melanie Clark somehow manages to present her tale with clarity and dignity and strength despite her shaking voice and the frequent loss of it. As the class unfolds, I’m struck by this profound truth: The Courage and Valor Award is aptly named not only for Lt. Clark but for his fellow firefighters and, most especially, for Melanie herself. The lessons learned and conveyed by her will stay with me always, and these I will share with you all in my next column; they are far too noble and grand to be confined to just one article.

If you’re interested in my book, Challenges of the Firefighter Marriage, check it out HERE

Anne Gagliano has been married to Captain Mike Gagliano of the Seattle (WA) Fire Department for 33 years. She and her husband lecture together on building and maintaining a strong marriage.