Firefighter fitness has never been as important an issue as it is today. As a result, several national and even international competitions have been created to highlight the best trained, fittest, and the strongest people the modern fire service has to offer.

These events include two prominent, highly competitive happenings which invite the fire service’s fittest men and women to take part and show why they are the leaders of a different sort that other members should follow. 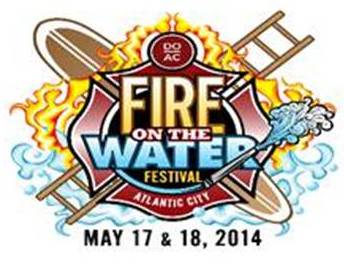 The first of these two events occurs at the DO AC Fire on the Water Festival. The two-day waterfront event will feature The Firefighter Combat Challenge World Tour and the seventh annual “Guns vs. Hoses”–Firefighters vs. Police–boxing tournament. The festival will have crafters, food vendors, beer gardens, live music, a kid’s Firefighter Challenge, kid’s activities and much more. “Fire on the Water” will take place Saturday, May 17th and Sunday May 18th from 10AM – 7 PM at Historic Gardner’s Basin Waterfront Park, located at 800 N. New Hampshire Ave, Atlantic City, NJ 08401.  Parking will be available free of charge on-site adjacent to the festival grounds. Additional parking will be available just a few blocks away on the 700 block of Atlantic Ave between New Jersey Ave. and Delaware Ave. Free shuttle service will be provided by the Atlantic City Jitney Association.

The Firefighter Combat Challenge is known as the toughest two minutes in sports. It annually attracts hundreds of U.S. and Canadian municipal fire departments at more than 25 locations and is now expanding to countries around the world. The Challenge seeks to encourage firefighter fitness and to demonstrate the profession’s rigors to the public. Wearing “full bunker gear” and the Scott 5.5 Air-Pak breathing apparatus, pairs of competitors race head-to-head as they simulate the physical demands of real-life firefighting by performing a linked series of five tasks including climbing the 5-story tower, hoisting, chopping, dragging hoses and rescuing a life-sized, 175-pound “victim” as they race against themselves, their opponent, and the clock.

Now in its seventh year the Atlantic City “Guns vs. Hoses Battle at the Basin” pits firefighter vs police in a three-round amateur boxing tournament. In addition to firefighters and police slugging it out, the tournament also serves as a stage for many young and up and coming fighters from the local area to showcase their talents. This year the money raised, through donations and the sale of an annual event ad book, will benefit the Atlantic City Police Athletic League (PAL). The PAL of Atlantic City is a non-profit organization that is geared toward, educational, recreational and cultural programs, with an emphasis on juvenile delinquency prevention. The PAL offers fun, learning, and recreation in a safe environment. Youth are the focus but the PAL offers something for everyone. Boxing will take place on Saturday, May 17, starting at 12 p.m. at the Gardner’s Basin Outdoor Amphitheater. To place an ad or make a tax free donation see contact information for BJ Hamilton, event coordinator, e-mail bhamilton@marketcitysolutions.com or call (609) 377-6551.

An added bonus to the Festival will be the Kid’s Firefighter Challenge. There will be a course set up for kids to get a chance to suit up and play firefighter. For the Kids Firefighter Challenge each child is outfitted with a helmet and “turn-out gear.” The events mirror those used in the Firefighter Combat Challenge. The details of the ensemble are accurate down to the reflectorized trim and Velcro closures on the tunic. In order, each child carries a shoulder load of hose, climbs to the top of our 12-foot inflatable tower, slides to the bottom, where they “stop, drop and roll.” They then crawl through the tunnel, work the miniature Keiser Force Machine with the supplied mallet, advance a 1″ wild land fire line with authentic nozzle striking a target and finally “make the rescue” with an appropriately sized mannequin. The Kid’s Challenge will run both Saturday and Sunday, May 17 and 18.

Another prominent event to look out for is the 2014 Firefighter Throwdown, taking place in Dallas, Texas, on August 15-16 at the Ken Bailey Hutchinson Convention Center as a part of the Fire-Rescue International tradeshow.

The Firefighter Throwdown was created to allow fit, enthusiastic, and competitive firefighters the opportunity to compete on a national level in the sport of fitness. Its goal is to provide firefighter athletes with an avenue to showcase their skills and fitness levels no matter the athlete’s age, sex, or geographic location.

Being an invitational event, ONLY 100 ATHLETES WILL BE CHOSEN to compete, so if you think you can hack it, please enter by filling out the form under the ONLINE QUALIFIER SECTION or click here.

Four diverse, torturous WODs, have been selected by David Bowman, five-time Grand National Champion for the Firefighter Combat Challenge and top three in the World/Over 40. This event is NOT for the uninitiated, the weak, or soft. This is guts and glory and you need to be in top physical shape to even be considered as a competitor.

Equipment will be supplied by Rogue Fitness and a 35,000 square foot convention hall at the Dallas Convention Center will be complete with sound system, DJ, videographers, and photographers.

IT WILL BE BROADCASTED LIVE ON THE WEB, so your friends, fellow firefighters, family, and fans can tune in.

To be eligible, you must be a professional or volunteer firefighter and be 21 years or older on or before August 15th, 2014.

A Visit from Mountain Doo the Search and Rescue Puppy, Part...