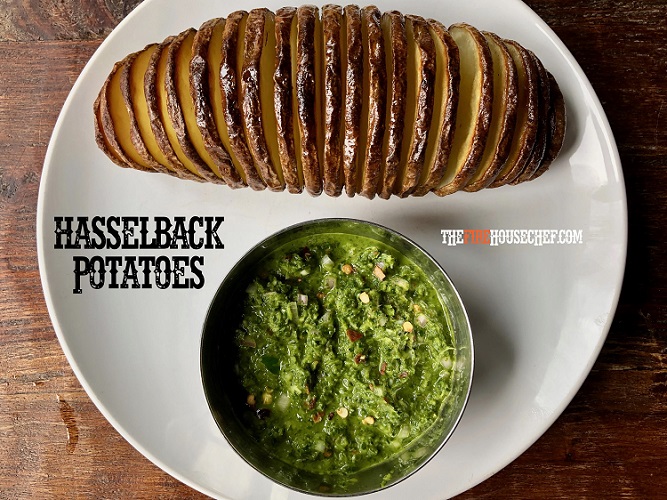 With many of my crew preparing for the next promotional exam with eyes on moving up in the ranks and spearheading our new wave of leadership, I thought it prudent to offer an alternative to the tried-and-true steak and potatoes promotional dinner. Make no mistake, there is a time and place for a perfect rib eye and mashed potatoes as a “thank you” for the support during what can be a busy time for the hopeful. But, I wanted to show that you can “dress up” the standard potato in other ways so let me introduce you to the Hasselback Potato.

Technique and presentation are on display here as more surface area is created by carefully slicing transverse cuts from tip to tail, exposing more tater to take flavor. Some stuff it with leaves (sage or bay), cheese, and bacon, but I want these naked so you can appreciate the craft. Much like upgrading your helmet to leather with a dope shield, it is an impressive sight to behold and elevates what is a very humble tuber.

A few after-the-fire critiques: I’ve tried this same recipe with sweet potatoes and butternut squash to great effect, so give them a try. Don’t limit yourself to just these particular tubers; carrots, parsnips, rutabagas, and so on are all great options. Topping the potatoes is another fun dive, be it maple syrup with Fresno peppers, garlic butter, chipotle crema, or in this case, chimichurri. Last, you can consider using the broiler for the last few minutes to get the top extra crunchy.

Pepper and Salt to taste

Heat the oven to 425°F. Meanwhile, melt the butter and reserve. Carefully slice ⅛-inch of the bottoms of the potatoes to create a flat surface.

Next, make ⅛-inch cuts across the length of the potatoes from tip to tail, ensuring not to cut all the way to the bottom.

Using the brush, lather ½ of the butter on the top of the potatoes, attempting to get some in between the cuts. Place the potatoes, evenly spaced, on a baking sheet spray lathered with oil or butter, sprinkle salt on top, and place in middle of the oven to roast for 30 minutes. Remove from the heat and apply the last brushes of butter. Since not all potatoes are created equal, cook in additional five-minute increments until the desired doneness. Top with additional melted butter or olive oil, add a pinch of salt and pepper, and allow cooling for five minutes, then indulge!

Ryan McKay is a 13-year fire service veteran and a firehouse cook from Atlanta, Georgia. His goal is to bring the fast-paced lifestyle of the fire service with the slow-paced art of cultivating family and crew through the tool that is food. He has made an appearance on NBC’s primetime show “Food Fighters,” is a co-founder of the Metro Atlanta EMS Conference, and works intimately with the SafePath Child Advocacy Center.