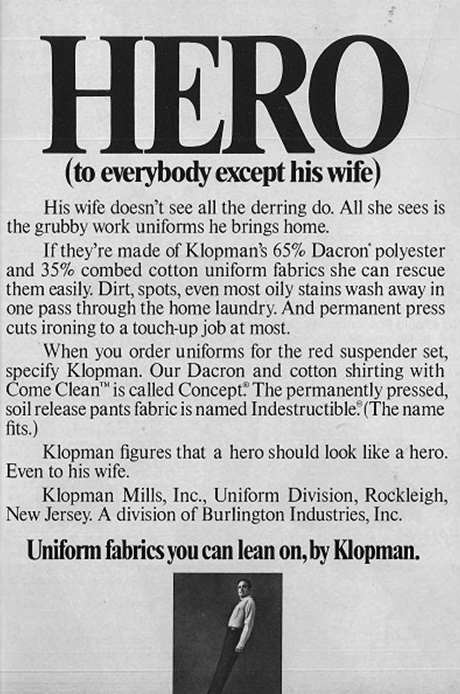 I chuckled and smiled at this old photo of a Klopman’s Uniforms ad in the June 1968 issue of Fire Engineering. I also borrowed the photo caption as my title for this column. The ad went on to say, “His wife doesn’t see all the derring do. All she sees is the grubby work uniform he brings home.” I was amused for two reasons: (1) because of the outdated and rather inadequate uniform of yesterday, and (2) because we wives often do see only the “dirty” side of firefighting as opposed to the heroic one. The grouchiness, the fatigue, the emotional distance, the injury; these things are not even pleasant, let alone heroic. Yet, this is often all we see—all we will ever see—unless we choose otherwise. This is the true challenge of being a good firefighter wife—choosing to see your firefighter as the hero he really is.

I know from three decades of fire marriage how easy it is to become detached from what my firefighter actually does at the firehouse. He rarely likes to talk about work, at least with me. He shuts down and I put on blinders; this is a big mistake. We’re both well-intentioned. He wants to rest, forget, recover, and shelter me; I want blissful ignorance as to how many he times he may have almost died. After all, neither he nor I can be on edge 24/7; it would be too stressful to function. But there must be a halfway point to be healthy, and we have found it. He has learned to tell me what’s going on, and I have made a point of being involved. Ignorance is not bliss if it causes a lack of respect; appreciation; understanding; and, ultimately, connection between he and I.

“A man is divinely wired to be a leader, father, and provider for his family. The last thing he needs or wants is a wife who doesn’t believe it, who’s always correcting him, unwilling to either recognize or support these qualities in him.”

Your firefighter may or may not care if he’s thought of as a hero by the community, but have no doubt, he wants to be thought of as a hero by you. The most important thing a wife can do is to make her husband feel needed, desired, trusted, and admired. He needs to know you believe he is capable of great things. This trust, this belief, will inspire him to succeed despite any feelings of inadequacy. The greater the encouragement from you, the greater his courage will be. And this is paramount for those who must be courageous for a living.

If all we fire wives choose to see is the sloppy, forgetful, indecisive clueless wreck after a long 48-hour shift, then that’s all we’ll ever get. As we nag and complain, he’ll give up trying, as he’ll never please anyway. Women are notorious for offering blanket disapproval, me included. You’ll reap what you sow. Finding fault and being impossible to please will result in just that—a husband who will quit trying altogether. On our good side, our nature is to care, to nurture, to mother. But if we forget to be a respectful wife, we get stuck in “domineering” mode and go a bit too far with the nurturing. And that’s the last thing a man wants his wife to be: his mother!  Let him be the man, even though he seems like a blasted wretch in need of your constant intervention. Don’t over-mother….you’ll just smother. You must step out of the smothering role and into that of an admirer if you want your marriage to sizzle and your husband to be the best version of himself, the one who ever tries to please you.

How is this done? How do we admire our firefighters, for real? Go to the firehouse once in a while. See what he does. Read articles. Watch videos online. I know it’s scary, but it’s also exciting to see your hero in action. Perhaps join a ladies’ auxiliary; some still do exist. They bring food and drinks to fires to support their departments. Got to socials and meet the co-workers; you’ll love hearing their stories as told by them, live and in person. You’ll hear a very different version than what your husband alone will tell you.

Go to a conference with your firefighter and sit in on some classes. Learn about danger and trauma and their effects; these things will help you understand the phenomena known as “backlash,” also known as “what you’re seeing at home.” And if none of these things are available to you where you live, ask your chief to do a “wives social” like Chief Francis Sweeney of the New Haven (CT) Fire Department. His department invited 350 spouses to a social designed just for them. It was held at the training center, and 175 attended.

The fire commissioner, chief officers, and medical service reps all gave brief talks explaining to the wives what their firefighters do. They presented a slide show of the husbands in action while the wives cheered. They answered questions. And they explained the importance of the fire service and all that it does for the community. They even gave each spouse a gift. The reason for the event? Chief Sweeney said, “I believe that if a wife has a reasonable knowledge of her husband’s occupation, she will be more satisfied and understanding. This I feel is important.” This, too, was taken from an article in the the March 1968 issue of Fire Engineering. At this I did not chuckle; at this I was moved, inspired, appreciative. Some things are never outdated. 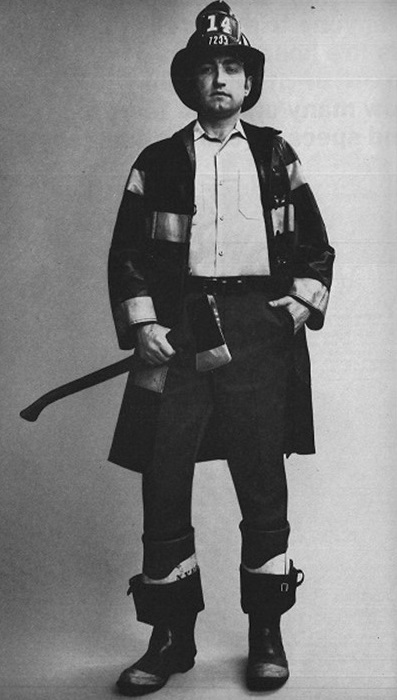 See the hero you live with. Your firefighter is one distinguished for action.

“A brave man, conqueror, a role-model, victorious, a god. A martyr, a champion, a prize athlete. A master, warrior, saint, a star. A popular figure, a great man, courageous, a man among men, a knight-errant. Valiant, fearless, strong. (See also heroine)”

A hero—to everybody— especially his wife.

Author’s note: A special thank you to Rob Maloney, FE Associate Editor, for inspiration on this one.

Anne Gagliano has been married to Captain Mike Gagliano of the Seattle (WA) Fire Department for 31 years. She and her husband lecture together on building and maintaining a strong marriage.