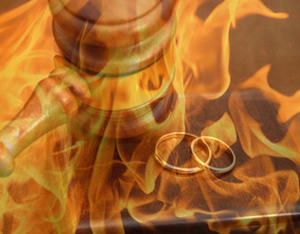 “Hate” is a strong word, so strong as to not often be used—for real. Perhaps you can only truly hate something when you yourself have endured it. Or maybe it’s just enough to be a witness, to watch the pain inflicted on others to make you hate it. The definition of hate is “a strong dislike of; a desire to avoid.” I’d say that about sums up my feelings. I myself am the child of divorce; I experienced first-hand what it is to watch your entire world shatter overnight. To have something you dearly loved die and not be able to even properly mourn its loss. To become someone different than you once were entirely against your will. Divorce does all of this and more. I hate divorce for reasons too numerous to list, but those reasons can be broken into three primary categories:  what divorce does to the children, what divorce does to the adults, and what divorce does to the firefighter.

What divorce does to the children. An enormous amount of research on the effects of divorce on children has been going on for decades now, beginning as early as 1921. Though the stigma of it has lessened of late, the repercussions have surprisingly not. Study after study comes to the same sad, unfortunate conclusion: Kids suffer mightily, for life, when moms and dads divorce. A child’s most basic need is for safety and security, which is best emulated by a stable home with established, predictable routines. Family dynamics are the most powerful, for good and, unfortunately, sometimes for bad. Children trust their parents to always be there, but divorce can shatter that trust. Love can end. Nothing is certain anymore. The predictable has been drastically altered, and the two people a child loves most are no longer living in the same home. No matter how “civilized,” divorce causes damage as I can personally attest to; it damaged me. Though every child is unique, research uncovers some pretty consistent tendencies, which are best measured in the form of increased risks. Risk by no means implies “guaranteed.”  And abusive marriages should end, as they can cause more damage than a divorce ever could. But in looking at these scary statistics, it is my hope to remind parents of all the reasons to keep your marriage intact.

Children of divorce are five times more likely to live in poverty. They have higher dropout rates and consistently fall behind in math (this is because, unlike other subjects, math is cumulative—if you miss one concept you can’t move on to more complex ones). They are more likely to develop drug and alcohol addictions and more likely to become sexually active during adolescence.

Other risks include antisocial behaviors and low self-esteem. Health issues are observed as well; the stressed-out child of divorce gets ill more often and takes longer to recover. These health effects have been measured all the way to the end stages of life: Children of divorce are dying, on average, five years earlier than the children of intact families. (This is due to the impact of poverty and antisocial behaviors that can lead to violence.)  There is even a possible link to an increased risk for stroke later in life; stress has been shown to actually alter a child’s physiology.

Children of divorce have a propensity for crime and even suicide. In a recent survey, 2000 children of divorce were polled. One in ten turned to crime; eight percent considered suicide. Some of the reasons for this include an increased exposure to adult aggression, having to comfort a distraught parent, and being forced to lie for a parent. Add to this stepparents and siblings; now children are compelled to accept a whole new family that they didn’t get to choose. As the parents are busy rebuilding their own lives both socially and economically, the traumatized children, who need more attention than ever, are now getting less. Neglected children who feel abandoned by their parents and uncomfortable with an unwanted step-family are more likely to turn to crime.

Divorce is a watershed moment for a child. It can be, and often is, a domino that knocks a kid down and keeps him there. It alters who he might have become in a secure home. That is why I HATE divorce.

What divorce does to the adults. The majority of people who divorce in this country do so for very ordinary reasons. In other words, average people are divorcing from average strife; very few stem from extreme circumstances. Most divorces could be avoided with but a little effort, a little sacrifice, and a willingness to work it out. But, unfortunately, the lazy and the selfish believe this lie: I am not perfectly happy in this situation so I will abandon all to get a better one.

But the truth is this: Statistically speaking, second marriages fail more often than first ones do (and third marriages even more so). The pressures of combined families with traumatized children coupled with financial woes can make the second marriage even more complicated and stressful than the first one. In trying to rid yourself of old issues, you simply take on new, more perilous ones. And sadly, in seeking a “perfect love” or a more exciting one, you often lose something irreplaceable–a close relationship with your children. In trying to make your life better, you’ve only made it worse. That is why I HATE divorce.

What divorce does to the firefighter. There is a shocking new monster creeping its way into the fire world: suicide. As of May 2014, there have been a reported 21 firefighter suicides this year alone. These suicides are linked to depression and anxiety. Depression from firefighting?  Perhaps, but the primary culprit is depression from divorce.

Because of the traumatic nature of firefighting, firefighter marriages are more likely to fail. The National Institute for Healthcare has made this startling discovery: Divorce is ranked as the #1 factor linked with suicide in every major U.S. city–ranking it higher than all other factors combined. Women are more likely to attempt suicide, but men are more likely to succeed, which explains why nearly 90 percent of all suicides are men.

Men who are struggling financially are ten times more likely to commit suicide than affluent ones. Divorce cuts an income in half. A married firefighter is much less likely to ever develop post-traumatic stress disorder (PTSD); a divorcing firefighter is the most likely candidate of all. Under the influence of extreme duress, one can make very poor choices. Traumatic stress and divorce (along with subsequent financial repercussions) can make the firefighter—one who saves lives for a living—extremely vulnerable to the poorest choice of all: to end his life. That is why I HATE divorce.