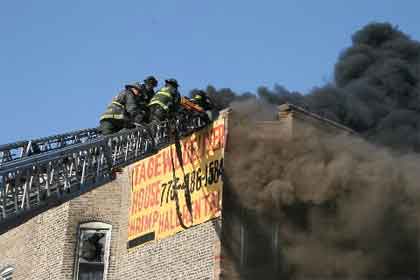 PMS—is there any aspect of womanhood less sexy to a man? The same can be said about PNS backlash, the least sexy aspect of firefighting. But when you love someone, you have to take the whole package, warts and all. A man has to adapt to the mood swings of a hormonal woman, and the firefighter spouse must do the same, as firefighting is a uniquely hormonal profession.  Adrenaline, noradrenaline, and cortisol are but three of the nearly 30 hormones involved in the fight-or-flight response, something the firefighter endures nearly every shift. Stress hormones are magical; they transform the body in amazing ways, turning an ordinary human being into an extraordinary one for the purposes of survival. But these hormones can leave a wake of destruction on both the firefighter and his marriage if not properly dealt with at home.

CareerCast.com named firefighting as the Most Stressful Job of 2015 as it is more “physically dangerous and psychologically taxing” than any other profession. Next on the list was the military, followed by airplane pilots, and then police. Of these top four stressful professions, firefighting is the most harrowing of all. Deputy Chief (Ret.) Vincent Dunn, FDNY, writes, “The U.S. Marine Corps called several NY fire chiefs to its Military Academy to find out how the fire service makes life-and-death decisions.  The Marines believe we make frequent and good life-and-death decisions during fires and emergencies, and they wanted to know how we train our fire officers in decision making.  During a war, the military makes many life-and-death decisions.  But when the war ends, so does the decision making.  The fire service makes life-and-death decisions in a war that never ends.”  The Marine Corps looks to the fire service for tips!  Even some of the toughest folks around realize what it takes to be a firefighter—to be a warrior, for life.

Just as the Marines recognize the incredible stresses and strains of firefighting, so must we spouses, as this will help us live with the realities of PNS backlash.  With great adrenaline rushes comes great exhaustion, and this is what we see at home, though we don’t always recognize it as such.  What does backlash look like?  It has many faces, and after nearly 30 years of this, I pretty much know them all.  For the firefighter marriage to survive, we must recognize these facets of backlash for what they are and what they are not: consequences of the stress response from a dangerous job, not character flaws.  None of this is ever to be an excuse for abuse; it is instead intended to be an explanation for some mildly irritating or even odd behaviors that are typical to most firefighters.

Indecisiveness:  Life-and-death decisions are mentally exhausting, more so than any other type of decision making.  At the end of a 24-hour shift, the firefighter can be so mentally drained as to have nothing left.  How does backlash affect marital decision making?  Spouse: “Honey, what do you want for dinner?”  Firefighter:  “I don’t care.”  Not caring what we have for dinner is a very common issue in our home, one for which I no longer “care” either.  Firefighter spouse, you will find that you are forced to make many small decisions without the input of your firefighter; it’s just a reality.  But here’s the upside; if he has no opinion when asked, then he has to accept whatever is handed to him without complaint.  This is a lighthearted example but a real one.  Know that your firefighter “does care”; he’s just sometimes too drained to say so.  Do not mistake a temporary detachment as a sign of relational apathy; it’s mental fatigue, it’s not personal.  And, more importantly, make all big decisions when your firefighter is well-rested so that these decisions truly will be made as a couple; this will save a lot of grief down the line.

Time Off:  There are reasons firefighters are given lots of time off.  One reason is the 24-hour shift, during which time the body’s circadian rhythm, or internal sleep clock, is disrupted (as with jet lag).  It takes a minimum of two with an optimum of four nights of unbroken sleep to reset just one night of disruption.  Without a reset, a firefighter can develop serious sleep deprivation, which predisposes him to becoming a stress casualty.

When police officers are in a gunfight, the International Association of Chiefs of Police (IACP) protocols state that they are to be given three or four days off to recover.  If they return to duty too soon and another incident were to occur, they would be vulnerable to severe psychological damage.  Many are given more than four days if needed.  Firefighters, on average, face life-threatening situations even more frequently than police.  Time off is vital for their mental and emotional health.  During a fight-or-flight response, as much as two-thirds of the brain’s function is shifted from the pre-frontal cortex (PFC) to the limbic region for the purposes of survival.  The pre-frontal cortex controls emotion; those suffering from post-traumatic stress disorder (PTSD) show a reduced activity in their PFC, resulting in chronic heightened anxiety.  Without time off to literally “shift gears,” both police and firefighters become prone to PTSD.

Firefighters must play the “long game,” sustaining mental acuity and physical strength for a career’s worth of service.  Time off is meant to be spent resting, recovering, and repairing from sleep disruption as well as the influx of stress hormones and their resulting effects.

For the firefighter spouse, time off means two things: Don’t resent it, and don’t overfill it.  Most people do not get as much time off as a firefighter, spouses included.  There have been times in my life that my job as a mom went 24/7.  Then I added more work on top of that to bring in extra income.  When I overloaded myself, I found that I began to resent my husband’s seemingly “easier” schedule.  Something had to give, and we both determined that it wasn’t going to be our marriage.  I let go of some of my extra commitments, which meant a little less income.  It was worth it; sometimes less really is more.  More time spent together, and more appreciation for his schedule.

I also came to understand why he needed those days off by facing the realities of firefighting.  For the first few years of his career, I was an ostrich; I ignored the dangers out of fear of losing him.  But for the firefighter marriage, ignorance is not bliss.  PNS backlash is a direct result of exposure to danger and must not be misconstrued as laziness.  Therefore, do not expect your firefighter to fill that extra time off with a longer “Honey Do” list.  The firefighter’s “Honey Do” list should be the same length as anyone else’s.

If your firefighter works in a busy house, try to avoid that “second job” or having him work every available overtime shift.  Again, time off is for physical and mental recovery from the most stressful job on the planet.  If your marriage is struggling, perhaps trimming the household budget is the answer.  An overworked, overtired firefighter can be tough to live with.  A happy marriage and a solid family are far more precious than any amount of extra money.

Living with “PNS” in the firefighter marriage includes discussions on food and even sex! Look for these and more in my next column.

Brotherhood Above All Else: Beef Teriyaki Stir Fry