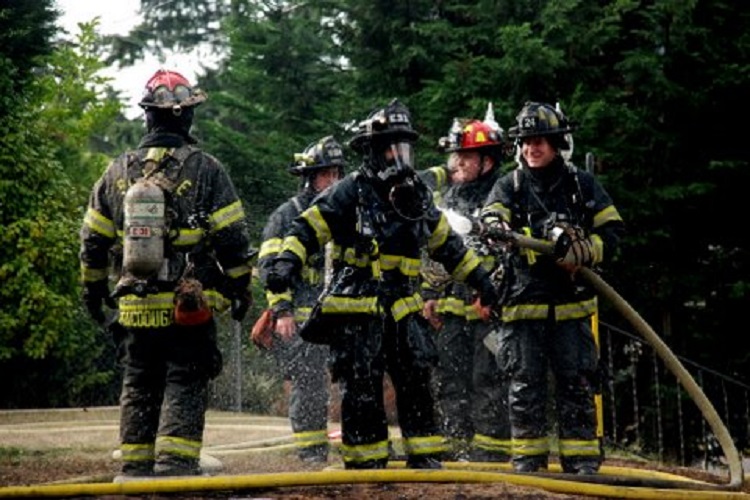 In the crowd of frightened faces, one young man’s stands out. Vasoconstriction from the massive amounts of stress hormones pulsing through his veins makes the areas around his eyes, nose, and mouth a deathly shade of white. He is dressed in the heavy protective gear of a firefighter. What distinguishes this young man from the rest of the crowd is not just his uniform but this one astonishing difference: He is marching up the stairs while everyone else is racing down. This moment of both terror and incredible heroism was captured for all time by the security camera in a stairwell of the World Trade Center on September 11, 2001.

The brave young man in the photo was called, and he answered. Our firefighters do this every day as they go out to meet whatever awaits them at the other end of the alarm bell. Their bodies fill with adrenaline as they “summon up the blood” to do battle for the citizens they serve. If it is an intense battle, the hormones will be used, resulting in a profound exhaustion known as parasympathetic nervous system (PNS) backlash. It is in this condition that they return, God willing, to the families that love them. Stress hormones have an impact that must not be ignored by the firefighter or the firefighter’s spouse, as their health and their marriage may be at stake.

A team of psychiatrists followed a veteran unit of soldiers into battle during the Korean War. The unit was attacked and fought an intense battle in which they were successful, but a counterattack was sure to soon follow. As they waited for the enemy to retaliate, the psychiatrists were astonished to see that the soldiers were all falling asleep!  They had to be awakened by the company officers, repeatedly. Parasympathetic backlash is so powerful that the body literally collapses, even in the trenches of war. It has to shut down to replenish its energy supplies, and the only way to do so is to sleep.

Airline pilots and doctors are required by federal law to get a certain amount of sleep as life-and-death decisions are part of the job. The same should be true of firefighters, as their profession was recently deemed to be more stressful than any other. Studies have shown that sleep deprivation is equivalent to being legally drunk. When lives are at stake, a sober mind is paramount to making critical decisions.

Sleep is the warrior’s best medicine. It resets hormone levels and clears the mind like nothing else can. Unfortunately today, we’re seeing high levels of post-traumatic stress disorder (PTSD) in returning Iraq and Afghanistan troops, and the reason may partly be technology. Instead of returning to the barracks to sleep, American soldiers are playing video games, watching movies, and surfing the internet till all hours of the night. The human brain can only hold seven new items of information at a time (hence the seven-digit phone number). More than seven items causes the brain to process the information into long-term memory, and it must stay active to do so. Media stimulation is a means of escape as addictive as drugs or alcohol. But if the mind is active, the body is not truly at rest, and this is alarming as sleep deprivation is the number one contributing factor to developing PTSD.

In the firefighter home, sleep needs to be as serious an issue as it is for the soldier, as firefighters fight a war that never ends. Make sure plenty of time is allotted for rest after 24-hour shifts, and limit late-night media binges. Though they appear restful, they are not. Only during sleep is the parasympathetic nervous system truly ascendant, enabling the body’s energy reserves to be restored for the next battle.

Stress hormones are meant to be used in fight or flight. If called to a fire and no fire occurs, the hormones will remain in the system. Adrenaline at home impedes sleep and impacts relationships, as it can lead to inappropriate harshness or aggressiveness. Running, lifting, and playing sports burn off excess adrenaline, allowing a firefighter to relax and shift gears. Work-out routines are often the first thing to go in a busy household, but they should be the last. And it’s worth every penny to set aside a small portion of the family budget for either a gym membership or home equipment. Exercise is just as vital as restorative sleep in maintaining a healthy firefighter and a happy marriage.

Stress hormones can wreak havoc on the digestive system. Adrenaline and noradrenaline suppress the digestive system, while cortisol increases the appetite. As a result, firefighters have high rates of indigestion, acid reflux, and spastic colon. Studies show they take a disproportionate amount of antacids. Food has a satiating, calming effect, which is a nice break from anxiety. This can be a good thing—in moderation. Unfortunately, placating stress with food can be just as addictive as alcohol or media consumption, which can then lead to another firefighter killer: obesity. Couples need to be aware of this tendency and have strategies in place to combat food cravings when planning family meals. Try to stock the shelves with healthier choices and limit bedtime snacks, as a full stomach also interferes with much-needed sleep.

Water is a firefighter’s friend both on and off the fire scene, as it is nature’s best digestive aid. Because of the suppressant effects of adrenaline, acids aren’t properly removed from the system. Water acts as a natural cleanser to the body and helps eliminate acids before they can build up. Water is also essential for keeping the body hydrated before, during, and after a fire, which increases performance and recovery. Firefighters should be drinking lots of water and low-sugar sports drinks at home to keep them healthy. Sodas, alcoholic beverages, and coffee do not have the same digestive and hydrating benefits.

PNS backlash can have many negative repercussions on both the firefighter and his marriage. But there is, however, one major perk: It typically increases the sex drive. Yes, firefighter, you are normal. Faced with death, destruction, and horror, there can be a powerful, life-affirming desire to mate. From the ashes of destruction grow the roses of success! Sex is the healthiest form of stress relief for the firefighter couple; use it to your advantage to keep your marriage intimate and strong. Firefighter couples sacrifice so much to serve the public; enjoy some of the benefits of doing so, and hold each other close.

To keep it all in perspective, always remember this:  While others flee danger looking for a safe place to hide, it is the firefighter who says, “Get behind me; I will protect you.”  It is a dirty, dangerous, desperate job but one that is necessary to stop death, destruction, and even terrorism. The calling to be a firefighter, to save lives, is essential if our civilization is to last. And where do we get such men and women, those willing to “ride to the sound of the guns”?  We raise them up by nurturing them at home, and that makes you—firefighter spouse—even nobler still.

Author’s note:  Some material for this three-part column was adapted from On Combat, by Lt. Col. Dave Grossman, a must-read for every firefighter couple.