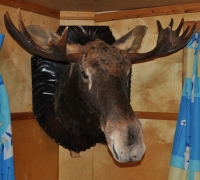 #1: We had an EMS call to the I-79 rest stop and, since I was near there, I swung my personal vehicle around and went as a first responder. When I arrived, our patient, who had suffered a fall, was being kept comfortable by bystanders. Since there was no need for my intervention, I just stood by and told our incoming ambulance the situation by my mobile radio. Pretty soon, the ambulance pulled in and everybody started laughing. I have been at a lot of scenes and have seen different reactions from victims and bystanders but never laughter. I looked to see the reason for the laughter and there on the rear bumper of our squad was a full soft drink cup that had survived the trip (7 to 8 miles) from our station. Funnier yet, the driver came to the rear of the squad and said, “Oh, there it is,” and picked it up and went on drinking as if nothing had happened.

#2: Several years ago, we had a fire in a small factory near Edinboro, Pennsylvania. Another firefighter and I were working a 1½-inch line down the hall and opening office doors one at a time and hosing them down. We pushed into one office to extinguish behind the desk. Visibility was poor, so we crawled in and swept ahead of us. When extinguishment was complete, I stood up and when I did something shoved me in the back. I stepped forward, and my partner turned and looked over my shoulder and his eyes went wide and he jumped back. I turned, and saw coming out of the smoke a moose with a full set of antlers. In the smoke it looked like we were going to have a very unpleasant encounter. This moose looked somewhat angry at the intrusion. We retreated.  Then we noticed our moose was mounted on the wall at about the four-foot level. I am happy to say we survived and the moose went on to be cleaned and is probably still there.

#3: We had a kitchen fire in an apartment. The attack crew worked through the smoke and saw the flames ahead and opened the line. The fire grew bigger. The crew tried again. The fire grew bigger. The crew went forward and noticed fire to the right and swung the line and extinguished the fire. When they did, the fire ahead of them went out. They had been trying to extinguish the reflection on the refrigerator door! We actually salvaged this refrigerator, polished it up some, and awarded it to the attack crew at our annual awards dinner.

Motivational quote of the week

“Failure to hit the bull’s eye is never the fault of the target. To improve your aim, improve yourself. Look in the mirror.”—excerpted from “Real Leadership for Real People: This Is Where the Rubber Meets the Road” given by Chief (Ret.) Rick Lasky, Lewisville (TX) Fire Department, and Battalion Chief (Ret.) John Salka, Fire Department of New York.

Diane Feldman, a 22-year veteran of PennWell Corp., is executive editor of Fire Engineering and conference director of FDIC. She has a B.A. in English communications. She has been a yenta (look it up) for most of her life. If you have a story for the Yenta, e-mail dianef@pennwell.com.