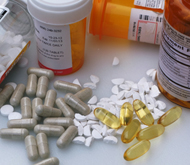 If you are over 40, you have probably read (maybe when no one was looking) with some interest the news stories about “… the current epidemic of Low-T.” It’s also nearly impossible to miss the TV commercials for both over-the-counter and prescription testosterone replacements that claim to have found a virtual “Fountain of Youth” for men of a certain age.

Is the testosterone level of American men really precipitously low, or this just another case of men who have ignored their health and fitness for the past 20, 30, or 40 years and now want some quick-fix miracle in a bottle?

Supplementation? …Not So Fast

First, remember, I am not a doctor!  If you believe you have an issue with low testosterone, consult your physician and follow his advice. It is not a good idea to self-diagnose or self-treat this or any illness. If you are considering pharmaceutically messing with your testosterone level without the benefit of competent medical advice, I would advise you to do some serious research before doing so … and remember, “BroScience” doesn’t qualify as “serious research.” Always remember that meddling in the affairs of “Father Nature” can invoke the law of unintended consequences.

Other than pharmaceutical intervention, there has also been a lot of talk about boosting testosterone levels through more natural means and that means diet and exercise. The big question is, does it work?

It is generally agreed that high-intensity exercise does in fact temporarily increase the amount of blood-circulating testosterone. The important word here is temporarily. Apparently, the effects last for about 45 minutes. The second question is whether that bump actually has any effect on increasing strength or on the growth of muscle.

The exercise prescription involved in promoting an increase in growth hormones is pretty standard. It involves a lot of very hard work on a consistent basis. They found that high-intensity cardio intervals and high-intensity weight lifting are equally important.

There have been quite a few studies done over the past couple of years and the one thing they agree on is that easy workouts and light weights won’t cut it. It takes a huge effort on a regular basis to make a significant increase in circulating testosterone levels. Interestingly, hard work is the same prescription one would follow just to build muscle and strength even if you aren’t thinking in terms of increasing levels of growth hormones.

The exercise prescription for strength training involves things like squats, dead-lifts, bench press, overhead press, chin-ups, dips, and core work, all done to failure for 3 to 5 sets using moderate to low reps. As for cardio, the recommendation is for 20- to 60-second intervals performed at or as close to 100% maximum effort for 5 to 10 minutes with an equal amount of rest in between exercise bouts.

They found that if you don’t go to failure on your sets or if you aren’t gasping for air by the time you are done, you aren’t working hard enough. Going light or slow just doesn’t produce the same results in increased growth hormone production. Once again, light and slow won’t produce quality results in any exercise program regardless of your testosterone level. Are you beginning to see a pattern here?

The dietary prescription tends toward somewhat higher protein and lower carbohydrate with the complete elimination of simple carbs. Since fat and healthy levels of testosterone aren’t compatible, it is also about losing fat slowly and over the long term so that you preserve your existing and hard-earned muscle. Once again, this is basically the same dietary and weight loss recommendations you will find in any good training program regardless of the testosterone link.

In the studies I have read where the workouts are hard and the cardio intervals are intense, the average man increased his lean body mass by approximately 4.5 pounds and decreased his fat by about the same 4.5 pounds over 12 weeks. These are good results from a diet and exercise program, so the increased testosterone workouts must work, right?

As always the devil is in the details. When you look at the basic results of increased lean mass, decreased body fat, and improved LDL and HDL cholesterol and triglycerides numbers coupled with a general improvement in well-being, it looks like a home run; and guess what? It is.

The overall improvements in health and fitness parameters of the participants seem to indicate that temporarily increasing growth hormones improved their health. But does this mean that the increase in growth hormones was in fact responsible for the improvement rather than simply performing hard workouts and eating well. The consensus is that no, it isn’t because of the increased circulating blood testosterone; rather, it is because of the intensity of the workout in and of itself.

In fact, in double blind studies, the results have shown that an exercise-only group did as well as a group that did the exercise prescription and received pharmaceutical supplementation as well. In these studies the testosterone levels were increased but still kept within the high-normal range. So given these results, I think it is safe to say that the slight uptick in exercise-induced testosterone wouldn’t be anywhere near enough to make even the slightest difference in the results if a dose of synthetic hormone, well above that which could be produced naturally, didn’t do it.

No one has ever shown that simply having a normal level of testosterone is a factor in building big muscles. Yes, you need a certain amount of testosterone for normal health and proper bodily function, but for it to have a direct positive influence all its own on muscle and strength you need more than your body can naturally produce. So that brings us to the pharmacy and massive doses of supplements.

There are a lot of over-the-counter products sold purporting to increase testosterone levels. Whether or not they work depends on who you listen to and perhaps what you want to believe. If you read their ad copy you would assume they have been rigorously tested and proved effective. Then if you continue reading you run into the disclaimers where they say nothing of the sort. They recommend diet and exercise and you should not use their product (or ad copy) to diagnose or treat any illness.

Some of these products have been pulled from the market (only to return later with a new name and package) because of links to everything from skin rashes caused by gels and creams to heart attacks and cancer. None of these products is approved by the FDA because they are marketed as nutritional supplements rather than drugs. These products get about the same scrutiny as cosmetics.

Another interesting thing about these supplements is that those that actually have active ingredients often contain substances banned by the US Anti-Doping Agency. So, if you or your child is competing in any activity sanctioned by any number of organizations (including High School Athletic Associations), you would be cheating by using these products.

If you think you have low testosterone, see your doctor and get it properly diagnosed and treated.

If you have normal levels, then you have no problem. Taking dubious products that make wild claims won’t increase your muscle mass, your strength, or your virility. Illegally or improperly taking real growth hormones can, and in all likelihood will, harm your health and might even kill you.

Working out for the single purpose of building muscle through increased exercise-induced testosterone doesn’t work, but the workouts themselves will build bigger muscles and more strength, so it’s a winner even if it works for a reason different than advertised.

So, eat well, exercise, stay lean, and don’t take useless or dangerous supplements. If you follow this simple prescription, you will most likely maintain healthy testosterone levels well into old age. You will also have good muscle mass and strength; live a long, happy, and fully functional life; and have peace of mind knowing that you did it by your own hard work and dedication and without resorting to pharmaceutical intervention.

Michael Krueger is an NSCA-certified personal trainer. He got his start in fitness training while serving in the United States Coast Guard. He works with firefighters and others in and around Madison, Wisconsin. He is available to fire departments, civic organizations, and athletic teams for training, consulting, and speaking engagements. He has published numerous articles on fitness, health, and the mind-body connection and was a featured speaker at the IAFC’s FRI 2009 Health Day in Dallas, Texas. E-mail him at MKPTLLC@gmail.com.

How Can a Sheepdog Live with a Sheep? Part 2