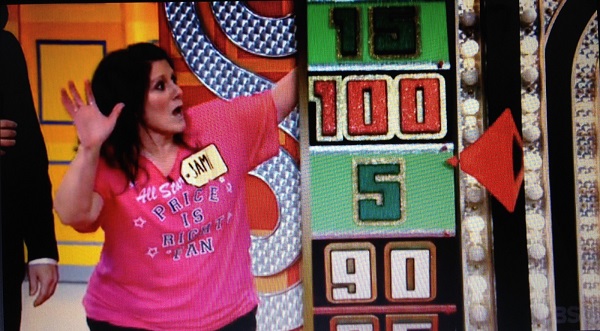 It’s tough being the fire chief’s wife. In a small town, the chief’s wife can’t go anywhere without running into someone who’s mad at her husband for various reasons, such as not having received that promotion or having been disciplined. It’s not so much about enduring the anger, it’s more about not being able to defend her husband; she simply has to “take it” and not say anything, which is sometimes really hard to do. When her husband is a public servant in the spotlight, a wife must often stand quietly in the background, holding down the fort alone. In the urgent world of firefighting, where emergencies come first, her dreams and sometimes even her needs often come second.

But not on this day. This day is hers and hers alone. A much-deserved day of accolade and victory, triumph and reward. These are the thoughts of retired fire Chief Rick Lasky as he sits in the audience of the television show “The Price Is Right,” cheering for his wife Jami. She has just been chosen as a contestant, a 23-year dream that he helped make come true. It doesn’t matter if she wins or loses; he’s just tearfully delighted for her. All those years of being a supportive fire wife and a loving, self-sacrificing mother have brought her to this special moment—and he couldn’t be happier.

But the show is more intense than either of them had expected. It’s hard to keep your head. It’s noisy, it’s hectic, and it’s surprisingly small. There is literally someone vacuuming backstage. Jami tries to focus on the task at hand: She must successfully guess the price of an item with a television camera practically jammed in her face. She fails the first two rounds and begins to fear she will not make it past “Contestants Row” to actually get to play the game. But on her third try, she guesses the price of the item (a flat-screen TV) within $5.00; she has made it through Round Four!

Rick screams and cheers, fist pumping the air and high fiving his neighbors as his enthusiastic wife moves ahead in the game. She is center stage; the spotlight is on her!  This is her moment to shine. But she has to focus in spite of the incredible rush of adrenaline. She must guess again–which two items are priced the same?  At stake? A $10,848 outdoor kitchen. No pressure. Most people succumb to the adrenaline and lose their mental facilities. But not Jami; this day she keeps her head and correctly chooses the obscure grocery items to win. She has made it through Round Five!

The “Showcase Showdown” approaches–the final round of the game. Out of the four who’ve made it this far, only two will go all the way. But first they must spin, trying to hit $1.00 without going over. Jami’s rival gets $.95, which is virtually impossible to beat. As Jami is about to spin, the odds stacked greatly against her, Drew Carey asks her if there’s anyone she wishes to say “Hi” to. Jami names her husband (Rick) and a friend. Jami later told me that she was horrified when she realized she had failed to mention their children!  This is a symptom of the adrenaline; it impairs cognitive thought. (That’s why it’s even more impressive what Jami goes on to accomplish, in spite of the hindrance of pressure.)  Jami spins; Rick holds his breath. The wheel stops on $1.00; incredible!  She just won another $1,000, and she has made it to the final round where the big prizes await.

The Showcase: a six-night stay in Maui, $3,500 in cash, and a car—that’s right, a car!  Can she do it? Can she name the value of these items without going over?  After 23 years of plotting and scheming and dreaming of this moment, Jami digs deep and takes her best shot. She makes a guess. Is it close?  Is it good enough?  Will she win?  Yes!  She’s done it; the fire chief’s wife has won. The crowd goes wild, especially Rick. He is finally allowed on stage, where he grabs his wife in a big bear hug, and together they cheer. Her outdoor kitchen: $10,848. Her showcase: $28,936. Her moment to shine: priceless.

I love this story for many reasons. A fellow firefighter family beat incredible odds to not only be on a television game show but to win big, really big. And Jami wasn’t just on any old regular episode but the commemorative 8,000th episode, which is replayed all the time. What are the chances?  But what charms me most of all about this tale isn’t the story itself but the way Rick tells it. He genuinely beams with pride and affection for his wife and gushes with sheer delight at her success. It’s not that she won cool stuff for him to enjoy; it’s that she got to do something she’s always wanted to do.

Firefighters, I hope you see what I see. Rick has set an amazing example for you to follow. He is an outstanding leader in the fire service with a next-level career, someone to be both looked up to and admired, and he is a very happily married man. He will be the first to tell you that he did not achieve his great success alone. Without the support of his loving wife, he would not have accomplished all that he has. Rick says it is not the guys at the firehouse that are there at the end of the day, it is his wife who has always been the shoulder to lean on. His advice? Put your first family first. Don’t rush your wife off the phone when she calls you at the station, and don’t hasten her out the door when she stops by to visit. Always convey her place in your heart, and never let her feel second. And, as in this instance, expend some effort to make her dreams come true, whether it’s a TV show or something else. You’ll be better for it.