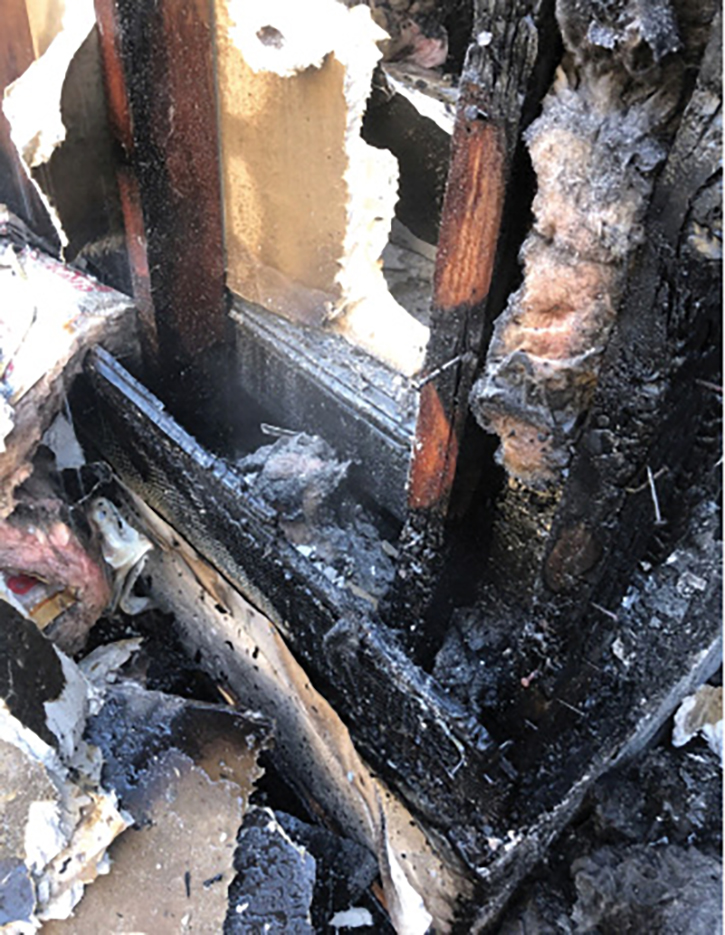 WHAT WE LEARNED ❘ By SALVATORE ANCONA

On January 9, 2020, at approximately 0849 hours, the Bellmore (NY) Volunteer Fire Department was alerted to reports of a house fire. About four minutes later, the chief of department was on scene and transmitted a call for a working fire within a private dwelling. The first-arriving unit, Engine Co. 601, was on scene at 0858 hours. The structure was a 2½-story wood-frame private dwelling with a basement.

Heavy fire was showing from the exposure 2 side on the first floor, spreading rapidly up the entire exposure 2 side and into the attic space. Initially, there was a question as to whether the home was occupied. However, this was proven negative after interviewing the homeowner, who accounted for everyone.

The Fog of the Fireground: Know Your Buildings

The first-due engine company was staffed with members who each had less than four years on the job, including the officer. The nozzle team stretched the first hoseline through the front door and to the first floor, where it extinguished a great deal of fire in the entryway and living room. 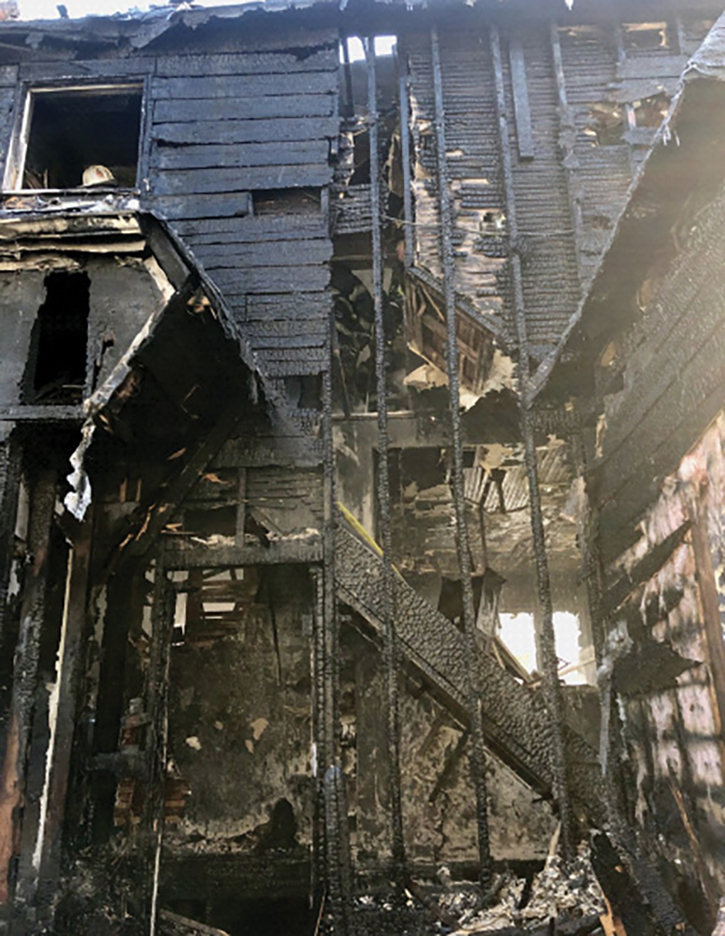 (1) The exposure 2 side wall was parallel with the interior staircase. Once opened, the charred remains of 16-foot vertical wood studs that originated at the basement sill plate and extended upward into the eave line were discovered. (Photos by author.)

(2) Fire originated at the lower portion of the first floor. This shows the open space from the basement into the stud channels, a common feature in balloon-frame construction.

As the team advanced into the home, it found that the kitchen in the center of the home between the living room and sunroom was fully involved. Again, the team battled the fire over their heads, knocking down most of it in that area.

As members began searching, they were met with fires burning in several locations throughout the home, including the exposure 4 side. They were also met with fire hidden within the wall chase, which was extending undetected from the first floor to the second floor and up into the attic space. It became evident quickly that this fire was more complicated because of the presence of balloon framing.

Basement searches were conducted after the initial fire attack and yielded negative results of fire. However, fire continued to burn uncontrolled in the attic while members opened the second-floor ceilings. These actions were ultimately slowed because of the presence of wood lath, plaster, and gypsum board. The home was also extremely cluttered.

On opening the second-floor ceiling, it was clear that the unprotected attic space used for storage had flashed over. The attic’s pull-down ladder was burned away; its remains were removed to help place a 10-foot closet ladder for access. The second-due handline was then advanced into the attic space and subsequently extinguished the fire while another unit overhauled the space. The fire had compromised the roof decking as well.

At this time, another fire had started in the rear bedroom on the exposure 2/3 corner in a closet that shared a wall with the second-floor bathroom. The third handline was stretched into this area while firefighters simultaneously opened walls and cleared out the heavily packed and cluttered bedroom. Firefighters began opening nearly every wall they could and found small pockets of fire burning in several wall spaces.

The exposure 2 side wall was parallel with the interior staircase. Once opened, crews discovered the charred remains of the 16-foot vertical wood studs that originated at the basement sill plate and extended upward into the eave line (photo 1).

The fire that originated at the lower portion of the first floor (photo 2) on the exposure 2 side had traveled vertically to the unprotected stud channels that had no fire stops, into the second-floor joist channels, and then horizontally across into the combustible void spaces above the kitchen cabinets to the other side of the home, igniting fires in the kitchen and living room. The fire then passed the second floor completely, igniting the attic space, which had no fire-resistive applications (e.g., gypsum board) and ravaged the dry old lumber that comprised the rafters and roof deck.

A History Lesson on Construction

Between 1833 and 1950, a universal construction method for wood-frame private dwellings controlled the market as an expeditious way to construct multistory homes. If you live or work in the United States, odds are you have come across homes that use balloon-frame construction. Furthermore, you most likely have dealt with the ramifications of fire within these structures. It is important to review tactical considerations for operations within combustible structures that can challenge even the most experienced firefighters.

At such fires, career and volunteer departments have faced common issues such as limited staffing, mornings just before working hours, young crews, advanced fire on arrival, and the potential for unknown occupants. If you are a volunteer, you know this all too well. A daytime fire in suburbia changes factors because many volunteers are at work. The firefighters who do respond represent a combination of all companies with varying experience levels, and mutual aid is often delayed. It is imperative that all departments, career and volunteer, refresh themselves on the tactics and fire travel within private dwellings of balloon-frame construction.

It is also important to identify the fire risks associated with balloon-frame construction. With Type V combustible construction, balloon framing uses wood studs that run from the foundation to the eave line. Sometimes, the studs are spliced together with nails to achieve the desired height. Wood members are then attached to the studs horizontally at the floor line, called a ribbon board. This is where the floor joists then sit atop, often, again, nailed to the studs or cut out to sit on the ribbon board in a shelf-like fashion.

Homes that have not been renovated over the years may still see plaster and wood lath used as the interior wall. This also adds to the combustible nature of the wall from the interior of the stud channels. The end result is often an unimpeded combustible channel that extends from the basement or cellar to the attic. This ultimately yields unprotected vertical and horizontal combustible void spaces that are common to all of the walls and floor systems of the home.

Now, many in the building construction community point out that a tell-tale sign of balloon framing from the exterior is the appearance of aligning windows, doors, or openings. This was the case long ago; however, firefighters should not rely on this. A home built more than 100 years ago has surely been renovated, so larger and more economically sound windows may have been added or openings closed off, often leaving the openings in this structure off line. This does not mean you should move away from sound size-up practices. Also note that renovations to balloon-frame homes often neglect to add fire stopping when the walls are opened, so don’t count on it being present until you’re able to open up and look yourself.

Postfire lessons learned at the above incident include the following:

SALVATORE ANCONA is a deputy chief fire instructor at the Nassau County (NY) Fire Service Academy; a former captain and training officer for the Bellmore (NY) Fire Department; and a paramedic supervisor in Queens, New York. He has an A.S. degree in fire science from Nassau Community College and is in the emergency services administration undergraduate program at John Jay College of Criminal Justice. Ancona is the author of the building construction page “The Sons of Brannigan” on Facebook and was a recipient of the 2019 FDIC International Honeywell DuPont Scholarship.