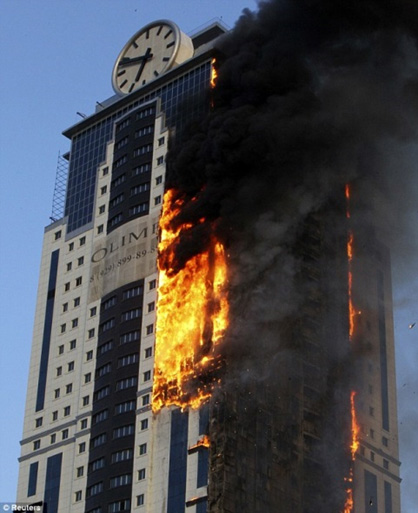 This article addresses the disturbing movement in the U.S. toward trading off exterior wall assembly fire performance safety requirements in the building code when internal sprinklers are present in buildings. This has occurred in certain areas of the country. A similar code change was attempted in April 2015 during the 2018 International Building Code development hearings.

High-rise building exterior walls are at risk of fire events that consume entire faces of buildings. Such fires have occurred in countries situated in the developing world such as the Middle East, Europe, and Asia. Where have such fires not been a significant problem? In the U.S.

What makes the U.S. different than those countries where such exterior wall fires are occurring? The fire protection engineering community in the U.S. foresaw the increasing use of combustible components in exterior wall construction decades ago. Through industry-funded research, an appropriate test method was developed to determine if a given wall assembly could support a self-accelerating and self-spreading fire up the wall, either through the outside surface, through concealed spaces within the wall, or by spreading fire into interior floor areas on stories above. The test method, NFPA 285, Standard Fire Test Method for Evaluation of Fire Propagation Characteristics of Exterior Non-Load-Bearing Wall Assemblies Containing Combustible Components, has been applied nationally by adopting the model building codes and has resulted in an existing building stock with exterior walls that are inherently resistant to self-propagating fires.

Now that building energy conservation initiatives are increasingly taking center stage in the U.S. and beyond, there is a desire by the design community to use an increasing amount of combustible components within high-rise exterior wall construction, for insulating materials, for cladding, and for water resistive barriers (WRBs). The well-proven, decades-old NFPA 285 fire safety requirement, which ensures that the resulting construction won’t allow vertical fire spread, is now said to be an inconvenience to areas of the building industry. The reaction to this “inconvenience” has been a handful of successful attempts convincing select jurisdictions to strike out the model code (IBC) requirements for exterior wall fire safety. There have also been some unsuccessful attempts to modify the IBC to reduce its requirements for exterior wall fire safety, aiming to eliminate the NFPA 285 requirement completely for high-rise buildings.

To read the entire White Paper article, download it as a PDF HERE (1.28 MB)