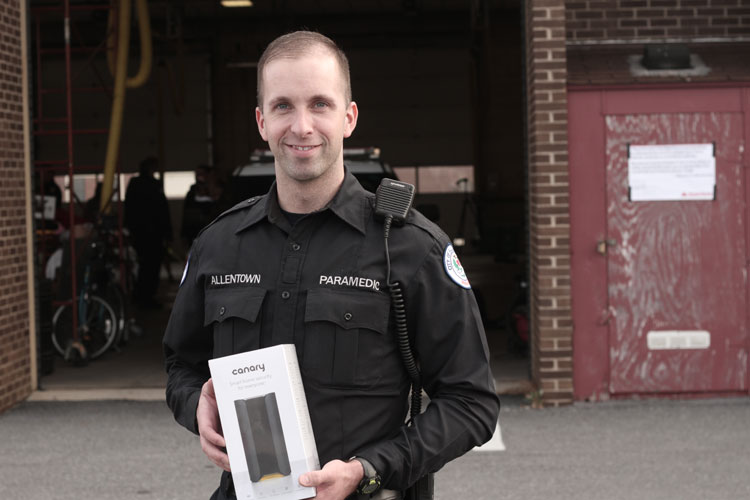 Canary, the NYC-based pioneer in smart home security and intelligent video systems, recently announced a nationwide initiative to put security devices in the hands of those who risk their lives on the front lines with the Salute First Responders program. Through an integrated campaign including consumer-nominated donations, local Protect the Protectors™ donation events carried out in partnership with State Farm, and a month-long promotion with Verizon, Canary is seeking to double its current total of 10,000 donated devices to first responders to 20,000 over the coming months. 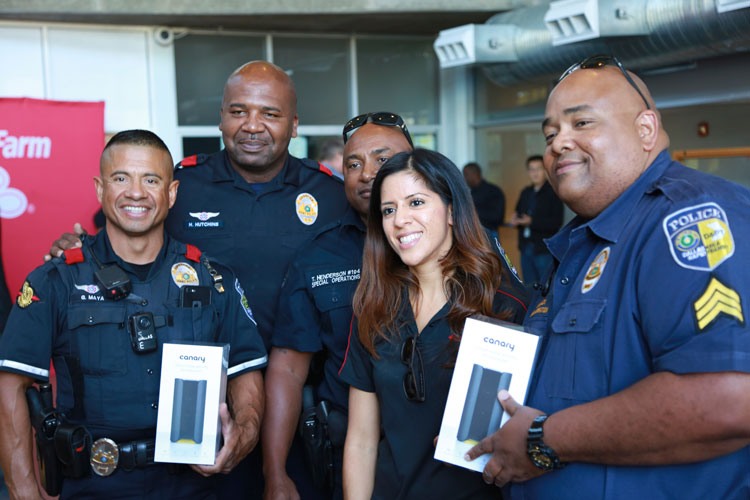 On April 18, Canary launched the SaluteFirstResponders.com donation hub where visitors can directly nominate deserving individuals or departments to receive Canary security devices. The donations will be fulfilled by an innovative Buy One, Donate One (BODO) promotion exclusive to Verizon retail stores and online. Throughout May, consumers who purchase Canary products will get $50 off each device while also generating a device to be donated to a first responder through the BODO promotion.

In partnership with State Farm, Canary will also host a series of donation events for first responders across the country to outfit entire departments with smart home security cameras. Called Protect the Protectors, the program first launched in 2016 and has since reached more than 50 cities across the U.S. As part of a multi-city, nationwide push, the first Protect the Protectors destination as part of the Salute First Responders initiative will be in Irvine, California, on May 1, 2018. Together with State Farm, Canary has already put security in the hands of more 10,000 first responders, including Ryan Koehler, a firefighter and paramedic in Kansas City, Missouri. See his story here.

“At Canary, we recognize that security and well-being is a true team effort, captained by the men and women who dedicate their lives to keeping our communities safe and stand ready to respond at a moment’s notice,” said Bob Stohrer, chief marketing officer of Canary. “In partnership with State Farm and Verizon, we are doubling down on our efforts to recognize their contributions, donating Canary security devices to first responders and their families all across the U.S. this May.”

May is the month first responders across the country and world are recognized for their bravery and service through International Firefighters’ Day (May 4), National Police Week (May 13-19), and National EMS Week (May 20-26). Canary and its partners are launching this three-pronged campaign over the month of May in observance of first responders across the country, providing consumers with multiple ways to support:

Protect the Protectors Donation Events: In partnership with State Farm, Canary will expand its long-standing program to put security in the hands of those who keep us secure by hosting local events throughout May, beginning with Irvine, California, on May 1. PTP has already reached more than 50 U.S. communities, including Miami, Dallas, Kansas City, Bloomington, Illinois, and Allentown, Pennsylvania. Learn more about PTP here.

“State Farm is honored to continue the Protect the Protectors initiative with Canary, supporting these brave men and women so that they too can know that their homes and loved ones are safe and secure,” said Heather Paul, Public Affairs Specialist at State Farm. “It’s an important initiative to provide security to those who sacrifice so much for their communities.”

Verizon In-Store Promotion: Starting April 26th and continuing throughout May, Verizon customers who buy a Canary All-in-One or Canary Flex device in-store or online will receive $50 off each product. For each device purchase, Canary will donate one Canary All-in-One device, up to 1,000 in total, through the SaluteFirstResponders.com donation site to a nominated individual or department.

Nomination Hub: www.salutefirstresponders.com will serve as the central platform to direct donations from the Verizon BODO initiative to nominated first responders and departments across the U.S. Canary will provide its flagship product, the Canary all-in-one, to recipients of the program. The Canary all-in-one provides total home security and intelligence with a 1080p HD camera, 90 decibel siren, plus a built-in climate monitor.

To learn more about how you can support and donate Canary security devices to first responders, please visit www.salutefirstresponders.com.