Chattanooga (TN) firefighters endured sub-freezing temperatures at a two-alarm fire early this morning in East Brainerd. The Chattanooga Fire Department received the alarm at 3:22 a.m. and responded with six fire companies to Carriage Parc Apartments at 1346 Gunbarrel Road. Battalion Chief Fredrick Blake said flames were shooting through the roof of Building 14 when the first firefighters arrived on the scene. Seeing the magnitude of the fire, Chief Blake called for a second-alarm response, which brought extra chiefs and a total of 15 fire companies to battle the flames.

Carriage Parc residents told Chattanooga firefighters that they woke to the sound of a fire alarm. As they left their apartments, they banged on doors to alert their neighbors. After conducting a primary search, Chief Blake said no one appeared to be in the building and all but one of the residents were accounted for. The one missing resident is believed to be out of town.

Chief Blake said the firefighters did an outstanding job under the circumstances. “This was a huge fire that was threatening to consume the entire building,” said Blake. “But our firefighters used everything they had to attack the fire and get it under control before it could do even more damage.”

With one end of the three-story building gutted by the fire, the decision was made to bring in a track-hoe to tear down the walls that are still standing to reduce the hazards to the firefighters and residents of the complex. The cause of the fire is under investigation.

Chattanooga police, EPB, Hamilton County EMS and Chattanooga-Hamilton County Rescue also provided valuable assistance on the scene. And the Salvation Army was making plans to provide hot food and drinks for the firefighters, who are expected to remain on the scene for several more hours. 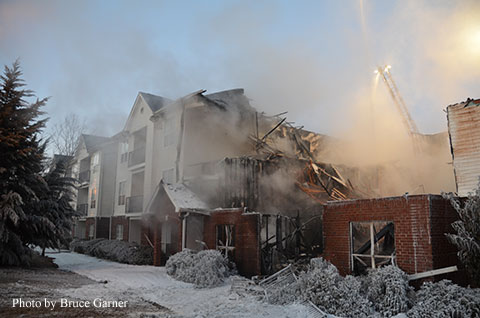 The fire gutted one end of Building 14 at Carriage Parc Apartments. 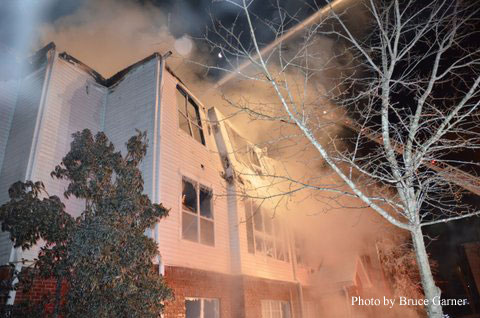 Water from one of the fire truck aerials pours into the top of the damaged building. 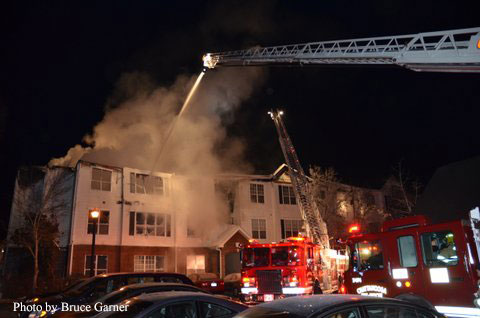 At least three aerials were used simultaneously to help the firefighters get the two-alarm fire under control.