Photos and article by Gregory Havel

The use of boilers in boats, ships, locomotives, tractors, mines, factories, fire engines, and homes is 200 years old. In the early years, boilers were used to generate steam, and required the presence of a boiler operator at any time that the boiler was in use. Boilers with automatic controls have been in use for nearly 100 years. This history has established what types of controls and control circuits are needed for the safe operation of a boiler without a full-time attendant.

If an early boiler operator wanted more steam pressure to make the ship, locomotive, or pump work faster, he would often add to the counterweight on the lever; and sometimes would wire the pressure relief valve closed. This often resulted in the boiler exploding from a pressure which it was not designed to withstand. The boiler explosion usually killed the boiler operator and anyone else nearby; as well as sinking the boat on which the boiler was in use or destroying the locomotive or mining equipment to which it was attached. 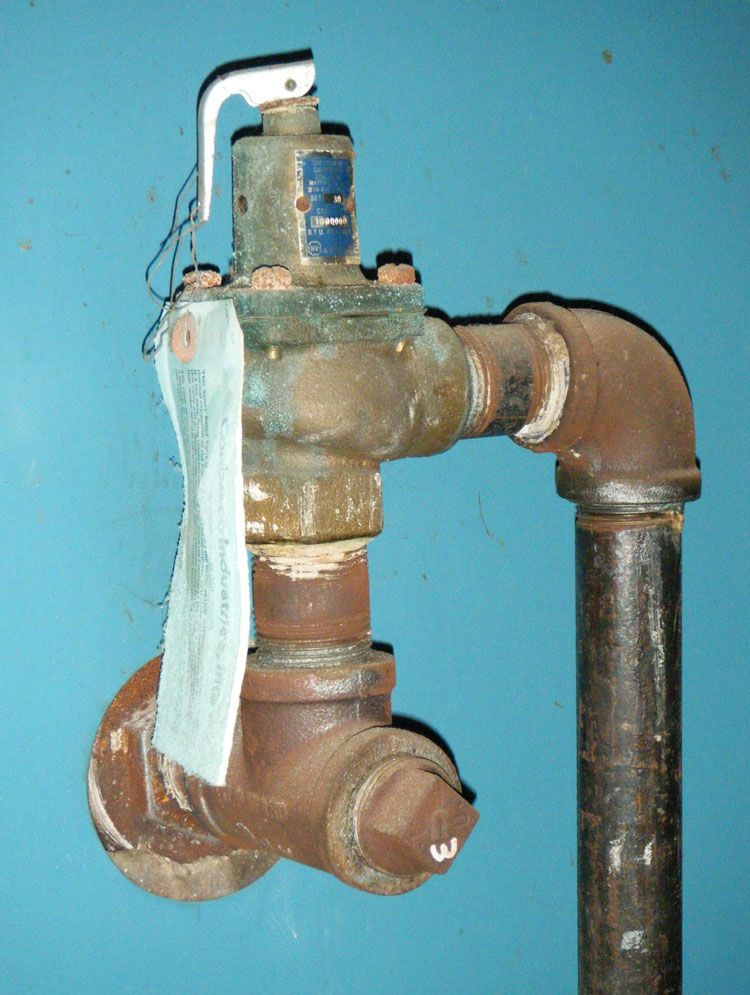 Photo 1 shows a modern pressure relief valve, which uses an enclosed spring instead of a lever and counterweight; and which is adjusted and sealed at the factory so that it cannot be further adjusted by the boiler operator. The small lever at the top of the valve is used to manually test the valve to ensure that it is not rusted or corroded in the closed position. The metal tag is attached at the factory, and contains the manufacturer’s information, as well as the diameter and pressure setting of the valve, and its relieving capacity in BTU/hour and/or pounds of steam per hour (if the boiler is used to generate steam) and/or gallons of water per hour (if the boiler is used for heating water). The paper tag is usually supplied by the relief valve manufacturer and is used to document monthly manual tests of the relief valve. The relieving capacity of the valve must be equal to or greater than the steam or hot water generating capacity of the boiler and its burner. 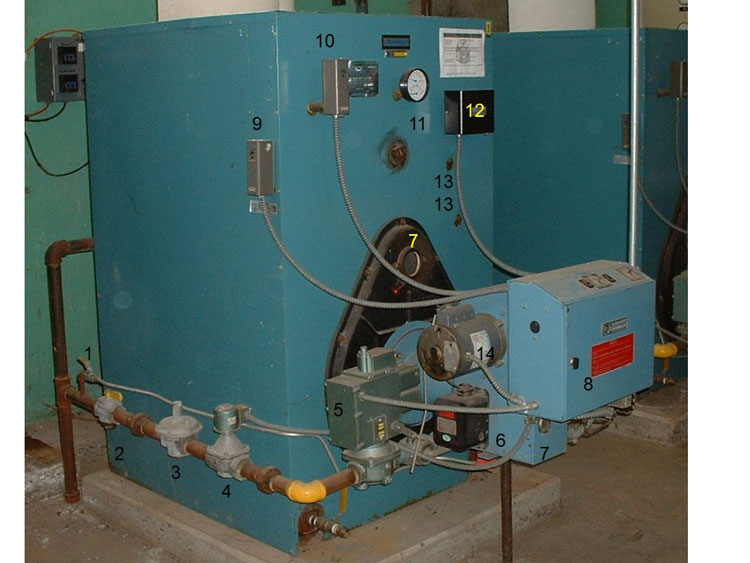 Photo 2 shows one side of a modern boiler and combination gas-fuel oil burner that heats a commercial building. 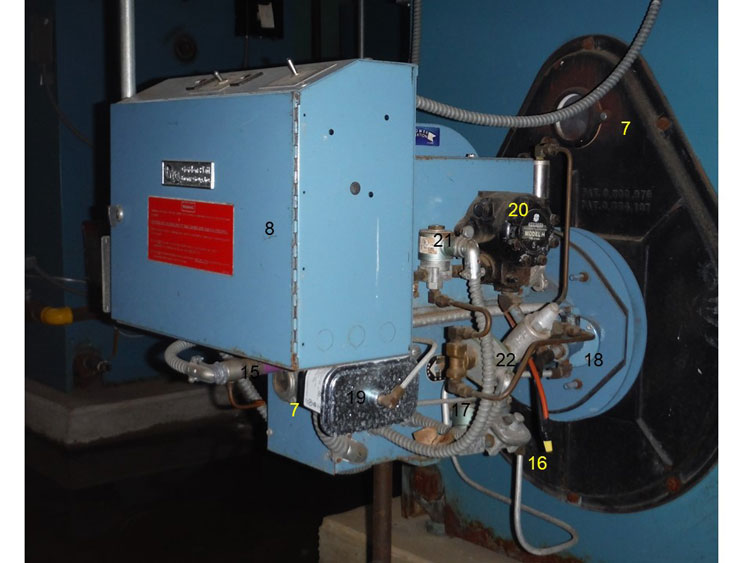 Photo 3 shows the opposite side of the same boiler and burner. 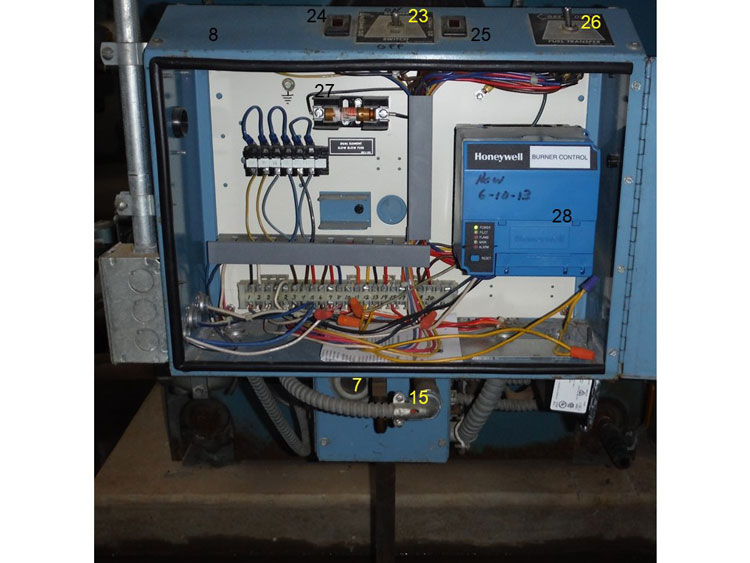 Photo 4 shows the inside of the burner control cabinet on the front of the burner. The pressure relief valve in Photo 1 is on the back of this boiler, directly opposite the burner.

13.  Plugs for connection of a water column with vertical sight glass and try-cocks (if the boiler is used to generate steam)

21.  Fuel oil automatic valve (not present on a gas-only burner)

22.  Fuel oil pressure switch (not present on a gas-only burner)

For this boiler to operate with gas as its fuel:

b.    Boiler must be filled with water, and circulating pumps must be running

f.      The burner control module (28) begins its cycle with a “purge” of the firebox inside the boiler, to remove any gas or oil vapors, so that the firebox will not explode during ignition; by starting the combustion air blower motor (14)

g.    When the purge is complete, if the combustion air pressure switch is closed, the burner control module will energize the ignition transformer (6) and the pilot burner automatic gas valve (17); and energize the flame scanner cell (15) and its associated circuits

j.      When any of the switching devices in the control circuit (the thermostat or other operating control, the high-temperature-limit thermostats, the low-water cut-off, the control circuit fuse, combustion air pressure switch, or flame scanner cell) open due to the call for heat being satisfied or due to an unsafe condition that is recognized, the burner control module will close the fuel gas valves, de-energize the flame scanner cell, purge the firebox, and shut down the burner.

k.     If all of the switching devices in the control circuit should fail in the closed position after a call for heat is satisfied or after an unsafe condition develops, the pressure relief valve will open to prevent the boiler from exploding.

To switch this boiler from fuel gas to fuel oil, the burner must be cycled through its purge and shut off; the power switch must be shut off; the coupler between the combustion air blower motor and the fuel oil pump must be inserted; the fuel selector switch must be changed from “gas” to “oil”; and the power switch turned on. The ignition and operation sequence of the boiler and burner will be the same as outlined above, except that the fuel oil automatic valves and switches will be used to control the main burner flame after ignition by the gas pilot burner, rather than the automatic gas valves.

Over the last 100 years, redundancy has proven to be the key to safe operation of unattended automatically-controlled boilers, furnaces, and other heating appliances. If one operating control fails and does not shut the boiler down during an unsafe condition, another control will do so. And if all the automatic controls fail to shut down the boiler (an unlikely event), the pressure relief valve will prevent a boiler explosion.

Smaller boilers and heating units for residential use will have simpler operating cycles and fewer operating controls; but still will depend on redundancy to prevent boiler and furnace explosions.

Larger commercial and industrial boilers and heaters and power boilers like those used in electrical generating plants use similar automatic controls. These have additional redundancy and alarms to warn their operators of developing unsafe conditions as they develop. These large units may also have multiple pressure relief valves, rather than only one.

The requirements for the amount of redundancy in the automatic controls, the kinds of alarms required, and the configuration of the equipment is determined by the standard which applies to the boiler, heater, or process. Among the standards that may apply are those of the American Society of Mechanical Engineers (ASME), Underwriters Laboratories (UL), FM Global (formerly Factory Mutual System), National Fire Protection Association (NFPA), and those of some insurance underwriters.

In an emergency response to a facility with a boiler or other heating appliance with a discharging pressure relief valve, the best approach is to manually shut off the fuel outside the room or building that houses the boiler; or use the electric shut-off switch that may be provided outside the door of the boiler house or boiler room. This will shut off the fuel to the boiler and let the boiler control module cycle the burner through its purge, to remove products of combustion and unburned fuel from the firebox.

Entering a boiler house or boiler room with a discharging pressure relief valve is a high-risk activity that exposes emergency responders to a high probability of scalds (steam burns) and other thermal injuries. Shutting off the wrong valve or flipping the wrong switch could make the situation worse.

If the boiler or heating appliance is critical to a process or environmental control, facility operating personnel can easily lock out the electrical and fuel connections to the failed unit as soon as the atmospheric hazard is clear; and re-energize the control circuits and back-up units.

Gregory Havel i a member of the Town of Burlington (WI) Fire Department; a retired deputy chief and training officer; and a 40-year veteran of the fire service. He is a Wisconsin-certified fire instructor II, fire officer II, and fire inspector; an adjunct instructor in fire service programs at Gateway Technical College; and safety director for Scherrer Construction Co., Inc. Havel has a bachelor’s degree from St. Norbert College, has more than 40 years of experience in facilities management and building construction, has a Chief Power Plant Operating Engineer license from the American Society of Power Engineers (ASOPE), and presents classes at FDIC and other venues.