Saturday, December 1, 2012, was the 54th anniversary of the fire at Our Lady of the Angels Catholic School in Chicago, Illinois. Three of the sisters who taught at the school and 92 children died. Many more were injured by heat, smoke, and jumping from windows to escape the fire.

The school was of Type III construction (ordinary construction, or brick-and-joist). It was 2 1/2-stories high, with the basement ½-story below street level. The south wing was built in 1903, and the north wing in 1910. They were joined by an annex, built in 1951. The school had been remodeled several times.

The school building was not equipped to resist a fire of any kind. The exterior of the building was brick masonry, but beams, floors, roofs, stairways, doors, and interior partitions were all wood. The hardwood floors were varnished and coated with wax. The walls were covered with layers of oil-based paint. Ceilings were covered with combustible cellulose-fiber acoustical tiles. Each classroom door had a glass transom window above it. Since the ceilings in the building were 12 feet (3.658m) above the floor, and since the window sills were three feet (0.915m) or more above the classroom floors, the second-floor window sills were nearly 25 feet (7.63m) above the schoolyard below.

The fire-alarm system consisted of two manual pull stations in the south wing, and none in the north wing. The fire alarm system had no connection to the fire department dispatch office. Heat and smoke detectors were not present, since in 1958 these were primitive, costly, and not yet readily available.

There was no automatic fire sprinkler system. Stairways were not inside fire-rated enclosures with fire-rated doors. The only fire escape was in the annex near one end of the north wing, and required use of the main corridor for access.

The four soda-acid fire extinguishers (Class A inverting-type extinguishers, 2.5 gallons (9.46 liters) each on each floor were mounted seven feet (2.134m) above the floor to prevent students from tampering with them–which also put them out of reach of many adults.

Our Lady of the Angels school had passed a fire department safety inspection only a few weeks before the fire. The school did not have to comply with the 1949 Chicago Municipal Fire Code because of a “grandfather clause” in the code. Existing schools were not required to retrofit the safety devices that were required in all newly constructed schools, and were permitted to remain in compliance with the 1905 Chicago city ordinances.

The fire started between 2:00 and 2:20pm on December 1, 1958, in a cardboard trash barrel in the basement of the north wing at the foot of the northeast stairwell. It burned undetected for 15 to 30 minutes, filling the stairwell with superheated gases and smoke. A window at the foot of the stairs broke from the heat, providing the fire with a new source of oxygen. The wood stairway ignited, as did the rubberized paint on the walls. Superheated gases and smoke bypassed the first floor, which was protected by a heavy wooden door, filling the second floor corridor with gases and smoke since there was no door at the head of the stairway.

At the same time, a pipe chase running between the basement and the cockloft above the second-floor false ceiling acted as a chimney for superheated gases, which filled the cockloft. The temperature rapidly rose until it ignited the exposed wood framing in these concealed spaces. The fire swept through the second floor corridor in the north wing of the school at the same time that the cockloft above the classrooms flashed over. 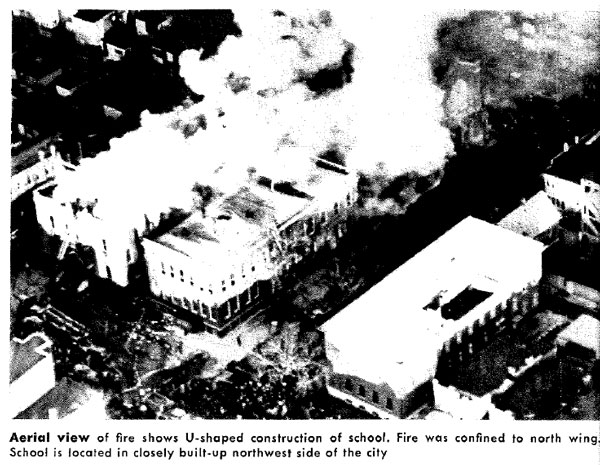 By the time the 329 students and five teaching nuns on the second floor of the north wing realized that there was a fire, the only escape route (the corridor) was blocked by heat and smoke. The nuns encouraged their students to sit at their desks or gather in a circle and pray—until smoke and fire broke through the transom windows into the classrooms, ignited the combustible cellulose-fiber ceiling tiles, and forced everyone to the windows. Since the fire department had not yet arrived with engines and ladders, some began jumping, while others fell or were pushed over the three-foot-high window sills to a 25-foot drop to pavement or gravel below.

Firefighters arrived within four minutes of dispatch, but by then the fire was out of control. Their arrival was delayed because they had been incorrectly directed to the parish rectory around the corner, and had to reposition apparatus and equipment after the correct address was found. They were further delayed because the south windows of the north wing of the school overlooked a courtyard surrounded by the school building on three sides, and by a seven-foot iron fence with a locked gate on the fourth side.

Firefighters began rescuing students and nuns over ladders from the second-floor windows, as others continued to jump to escape the flashover of the classrooms. More than 160 children were rescued down ladders, but the rest who died had been unable to get to a ladder or jump from the windows. Of those who jumped, some were killed by the fall and the rest were seriously injured. Many of the smaller children were not able to climb over the window sills and were trapped and died when the classrooms flashed over.

Contributing to the rapid growth of this fire and its tragic results were:

In the only positive outcome of the tragedy, major changes in school fire safety regulations were enacted nationwide; and the life-safety, fire, and building codes were revised and strengthened, and applied to occupancies in addition to schools.

For more information on this tragic fire, visit the Web site http://www.olafire.com  The Web pages have building plans and three-dimensional models, photographs, national news stories about the fire; and statistics about the building, its occupants, and the fire’s victims.

Also, search the Learning Resource Center’s on-line catalog at the National Fire Academy at http://www.lrc.fema.gov/index.html ; and internet search for “Our Lady of the Angels Fire.”